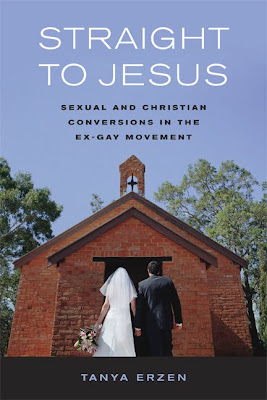 In which I review another one of what Hanna calls my "scary books." This time, Tanya Erzen's Straight to Jesus: Sexual and Christian Conversions in the Ex-Gay Movement. After hearing Tanya Erzen talk about her recent work on the religious experiences of Twilight fans on RhRealityCheck, I tracked down Erzen's earlier work (originally her dissertation) based on a year-long ethnographic research project on New Hope, the United States' oldest ex-gay ministry.

Straight to Jesus documents the personal experiences of those within the ex-gay movement and places their ideologies and practices within the context of the context of the religious, political and psychotherapeutic frameworks within which the ex-gay movement has come of age. Erzen argues that while gay rights advocates and the politicized Christian Right have become polarized over the question of whether sexual orientation is fixed or changeable, most ex-gay-identified individuals and their support networks resist the politicization of their sexual lives and instead focus on the spiritual transformation they experience through ex-gay programming. Just as Evangelical Christianity believes in the need for sinner to continually be born again and experience renewal in their relationship with Christ, so to (Erzen argues) ex-gay ministries see the process of becoming ex-gay as an ongoing cycle of confession and rededication which Erzen has termed "queer conversion." She explains that

Although the political goals of the ex-gay movement and queer activists are radically distinct, by accepting that a person's behavior and desire will not necessarily correspond with their new ex-gay identity or religious identity, ex-gay men and women enact a queer concept of sexuality (14).

What I found most fascinating in the book was the relationship between performing gender and straight sexuality. The gender and sexuality theorists of the ex-gay movement are, by and large, working with mid-twentieth century concepts of gender and sexual identity which associate homosexuality in men with what they see as effeminacy and homosexuality in women with characteristics they consider to be "butch" (like an interest in car repair). They also read male homosexuality as entirely physical -- destined, regardless of the desire of the individuals involved to be a series of anonymous hook-ups -- and lesbianism as entirely emotionally-driven -- by its very nature "emotionally cannibalistic" because the women, rather than desiring each other sexually (women! wanting sex! don't be ridiculous!), want to be one another (152).

Following this logic -- that homosexuality is caused by a weak identification with one's assigned gender -- the ex-gay movement has incorporated lessons on gender performance into its therapeutic agenda. Women are taught to apply makeup and select clothing, men are taught how to interact with other men in a platonic fashion and play manly sports. In one particularly bizarre (to me, anyway!) exercise, the residents of New Hope's "steps out" of homosexuality program are brought together with straight men and instructed to interview the straight men about how, essentially, to perform straight masculinity. Questions include "what physical aspect of the opposite sex turns you on?" and "Can a man ever fully understand a woman?" (108).

This approach essentially inverts the basic liberal-progressive concept of sex and gender, in which sex (one's physical sex characteristics and sexual orientation) are biologically determined and "gender" refers to all of the ways we make meaning of those sexual differences, and the cultural roles we are expected to inhabit. Within the ex-gay movement, gender is the primary marker of identity, and deviating from the assigned gender roles of one's sex is damaging to the very core of one's identity -- as opposed to one's sexuality, which is seen as primarily about actions rather than core identity. (Obviously, there are lots of nuances and challenges to the sex/gender division within liberal-progressive circles, but I think the basic distinction here is valid, particularly when characterizing the mainstream liberal position).

I'm not particularly opposed to seeing sexuality as more mutable -- indeed, many people within feminist, queer, pro-gay circles have been arguing for years that sexuality is much less set-in-cement than the simplistic biology-based way of understanding sexuality that the gay rights movement has so often chose (for strategic reasons) to emphasize. What seems harmful to me about the ex-gay position concerning sex and gender, however, is that they demand such rigid conformity when it comes to gender performance. This signals to me a fear of human diversity that will, in the end, become self-defeating ... since human beings are, and (in my opinion) will continue to be a gloriously heterogeneous, both in sexual orientation and gender expression. To tell people who believe their non-straight sexual orientation and non-conforming gender identity endangers their relationship with God and Jesus is -- to me -- an act of violence. It is another instance in which the Evangelical God-as-abusive-parent narrative surfaces in a way that offers short-term relief (you can struggle with homosexual desires and not be exiled permanently from God's love!) but ultimately the anguish of being judged and found wanting at the very core of your being.