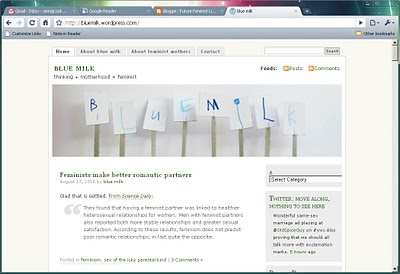 This week, I bring you blue milk, an Australian-based blog on things feminist and things parent+child related. As the blog tagline puts it: "thinking + motherhood = feminist." We are also offered the following image of the blog author. 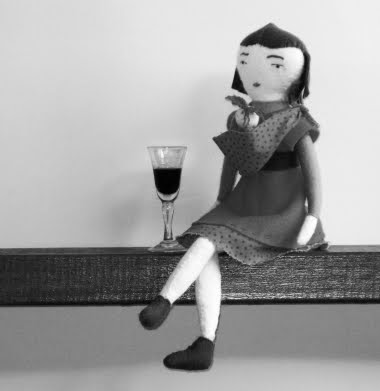 From On the backs of other women.

I initially thought this little post was going to be about community. About how much I have come to cherish the school community particularly, that we are now a part of, and how some mothers at my daughter’s preschool have been saving my arse lately, over and over again, and for pretty much nothing in return. But the big fat gender factor tells me that this post isn’t actually about ‘community’.

Discounting the teachers at the Montessori preschool and the kids’ father, it takes the efforts of five other people caring for our two children to allow me to be at work three days a week. Pick-ups and drop-offs and naps and cuddles and dinners and baths. Only one of those five are paid for it, and all of them are women.

From Guest Post: Being a feminist and raising ‘a lad’ (from her "10 questions about feminist motherhood" series). Answers from Matari.

1. How would you describe your feminism in one sentence? When did you become a feminist? Was it before or after you became a mother?
I became a feminist at the age of 11 when I was abused by my stepfather. I learnt to call myself a feminist when I realised that as a woman, my abuse was nothing unusual and, in fact, represented the lack of power that women have in our society.

2. What has surprised you most about motherhood?
How attached I was to my son as soon as he was born – I almost expected to be able to fit him into my schedule and carry on as before. But no, that was not the case AT ALL – I instantly became responsible for a little life that, if was injured in any way, would affect me for the rest of my life.

3. How has your feminism changed over time? What is the impact of motherhood on your feminism?
My feminism became more entrenched, as – with every other event in my life,- I recognised that as a mother I would (again) be a marginalised woman, exacerbated by being a single parent.

From Why attachment parenting NEEDS feminism.

This is probably the right time to admit that not only am I an attachment parenting type - our children are co-sleepers, including the older one who is now five years old; I breastfeed the toddler; and we have more slings than vehicles in our house – but for the record, I am also a mother who works part of each week outside the home. I have been separating from our toddler since before he was a year old. And to be perfectly honest, Wootan’s advice doesn’t really rattle me. I have done my share of soul-searching over the last five years about being a working mother and I feel confident that our decisions have been good ones, and what’s more, that the children are ok too. But I know Wootan’s position will distress many other women in my position; I know a few years ago it would have thrown me for a loop. And while I am sure Wootan is a very caring doctor, anyone who makes a statement like that, about how women should live their lives, deserves a little scrutiny.

But how insulting is the prioritising of working families to people without children? Don’t they consider themselves part of family too? Aren’t they contributing to the community? Don’t they have the right to some priority in policy planning and fiscal generosities? The term ‘working families’ creates an unnecessary division, an us and a them. It undermines the goodwill people without children might otherwise feel towards people with children. Sure, raising children contributes to a ‘social benefit’ that all of society enjoys, and its costly for the individuals raising those children, but telling everyone you’re prioritising ‘working families’ must surely niggle away at the cohesiveness of parents and non-parents. It also makes women feel like their only value is in childbearing. Although, ‘deliberately barren’ is such a ludicrous term, such an unfortunately revealing comment on the right-wing agenda that however hurtful it is to women it is also kind of soothing to see Heffernan and those like him exposed so badly.

Enjoy! And see you next week for another installment of in love with new blogs.

posted by annajcook at 9:43 AM

Email ThisBlogThis!Share to TwitterShare to FacebookShare to Pinterest
labels: children, feminism, in love with new blogs