This weekend, I'm heading home to Holland, Michigan (yep, it still feels like "home") for Christmas . . . by train. It's twenty hours from Boston to South Bend, Indiana, by Amtrak, and in order to pass the time I'm taking--what else?--a big stack of books. Here's what's in the Nina Totin' Bag.
It is entirely possible that between now and Saturday, noon, when the train pulls out of South Station, I will have added a volume or two to the collection. I have this 25% Barnes & Noble coupon burning a hole in my pocket and I think the Prudential Center has a copy of Julia Serano's Whipping Girl: A Transsexual Woman on Sexism and the Scapegoating of Femininity, which I've been meaning to read since July, and which I know I will need to own since it will be read with pencil in hand to make notes in the margins. And Mom tells me I simply must read Lauren Child's Clarice Bean Spells Trouble . . .

Then again, I have to fit those Christmas presents in somewhere too.
posted by annajcook at 5:00 PM No comments:

Announced by all the trumpets of the sky,
Arrives the snow; and, driving o’er the fields,
seems nowhere to alight: the whited air
Hides hills and woods, the river, and the heaven,
And veils the farm-house at the garden’s end.
The sled and traveler stopped, the courier’s feet
Delayed, all friends shut out, the housemates sit
Around the radiant fireplace, enclosed
In a tumultuous privacy of storm.

posted by annajcook at 1:05 AM No comments:


So today was going to be my last class of the semester (History Methods), but that snowstorm which has been making its way across the States has finally reached the Atlantic, and Boston has decided it can't handle a little snow. Everyone and their thrice removed cousins are shutting down and getting a head start on their commute home. Here's what the street outside the res campus looked like at 2:30 this afternoon:

So sadly (and I mean this genuinely), we were not able to hold our discussion about "Where is history headed now?" and eat the chocolate-chip-raisin-oatmeal cookies our professor promised us.

At the same time, I've got Glen Miller's In the Christmas Mood on the stereo and I'm sitting in my room with a mug of hot chocolate watching the snow from indoors . . . what's not to like about that? 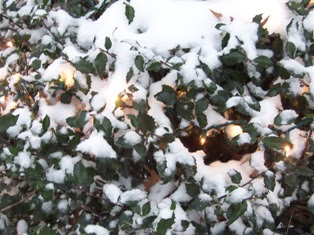 . . . Not if you see it on the big screen, at least according to Hanna Rosin's review, "How Hollywood Saved God" in The Atlantic Monthly.

While I am very much looking forward to seeing the movie adaptation of The Golden Compass, by Philip Pullman, on the big screen this weekend (my first movie in the theater since . . . um . . . well, before I came to Boston, I swear on both volumes of my Shorter OED) it's been interesting to hear some of the debate about the film, the books, and their treatment of religious issues. While I'm not sure I would go so far as to label it a "controversy," as it was billed on this morning's "On Point" discussion on NPR, it does seem to have stirred up a little, shall we say, dust in Catholic and Evangelical circles.

"On Point" actually had some extremely thoughtful guests (Ms. Rosin among them) who were discussing the theological themes in both His Dark Materials, the book trilogy, and the movie-makers decisions to elide most of the deeper re-workings of Biblical and spiritual themes. Professor of Religion Stephen Prothero won my heart with his passionate defense of literature as a way for young people to explore the Big Questions and engage in meaning-making for themselves, as well as his delight in Lyra, the series' protagonist, as a feminist heroine:

My daughters get dressed up as Hermione for Halloween and for the Harry Potter parties, and you know Hermione is a wonderful character but she's sort of carrying the water for Harry Potter, who gets to be the hero . . . and I love that about the books [that Lyra gets to be the heroine]. I think it's wonderful to tell girls to question authority, to make a little trouble, to be suspicious when people talk in God's name as if God is speaking to them through an earphone.

Even more radical, of course, is Pullman's project of writing an "alternative Genesis" with Lyra as a new Eve whose initiation into sexual awareness is the catalyst for redemption. The narrative is an explicit "response to the church," Rosin points out, drawing on her interviews with Pullman himself, "this idea of patriarchy and misogyny and the idea that she should be Eve, and she should re-write the story of Eve."

"And I would argue," Prothero follows up, "that what we have there is something quite like feminist theology . . . that we shouldn't be thinking about God as this old man with a beard in the sky . . . why do we have to have the woman be the villain here? Why can't she be the hero?" Amen.

Plus, I hear that seeing the daemons on screen is worth the price of a ticket. So see you at the theater!

As an aside: My one reservation about the books, incidentally, is the way they are being marketed--much like the Harry Potter books--to a pre-teen audience when they are actually much more dense and in some ways more frightening, than Rowling's series.

Also, Tom Stoppard wrote one of the early screenplays--wouldn't you love to have seen that version??!

My friend Hanna passed along this deadly website to me this morning, and I have already used it for many valuable minutes of procrastination. It's one of those play-a-game-to-defeat-world-hunger sites, and the particular gimmick is that you get to guess what words mean! If you are as excited about this as I am, then I know why we are friends. If not, we can still be friends (I don't mind).

Today, I learned the meaning of the following wonderful words:

Hanna also suggests that you enliven the game by trying to remember why you know the meaning of certain words. Why, for example, did I know that "abaca" is a word for "manila hemp"?

The semester's almost over!

posted by annajcook at 8:03 PM No comments:

Email ThisBlogThis!Share to TwitterShare to FacebookShare to Pinterest
labels: fun
Newer Posts Older Posts Home
Subscribe to: Posts (Atom)
"The past is a wild party; check your preconceptions at the door." ~ Emma Donoghue, Inseparable: Desire Between Women in Literature (5).