$1 reviews are posts about books I find (or Hanna finds for me) on the $1 used book carts at the bookstores we visit around Boston. 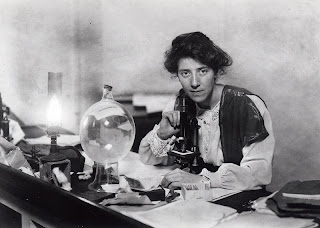 Marie Stopes in her laboratory, 1904
Image made available through Wikimedia Commons
Last weekend, when my mother was here on a visit, Hanna and I took her to Brattle Book Store near the Boston Common to shop the glorious $1 and $3 book carts which they keep in the empty lot next door. There, much to my feminist sex geek delight, I found a copy of Marie Stopes' 1918 classic Wise Parenthood ("The Treatise on Birth Control for Married People. A Practical Sequel to 'Married Love'") for a mere $1.00! By the time the twenty-first edition (my edition) appeared, the book had gone through sixty-eight printings and 626 thousand copies were in circulation.

Much to my everlasting sadness, I neglected to buy a copy of Married Love when I saw it at an antique mall last fall in Michigan -- only going so far as to follow my mother around the shop reading hilarious passages aloud to her and giggling obnoxiously. So I have not read the the companion volume to Wise Parenthood. I thought I'd share this passage, however, since to at least it presages the current conversation about modern parenthood/reproduction as a conscious decision that a couple makes, as opposed to something that just "naturally" happens to opposite-sex couples when they enjoy an active sex life.

Nature herself provided that men and women should delight in meeting. Given a loving married pair in normal health, and unsophisticated in any way, there is seldom any lack of children around them after they have been wedded for some years. This is what is still described as the 'natural' condition of affairs, and in these days of sophistication in so-called 'civilization,' some reformers urge a return to Nature and an unregulated birth-rate.

If, however, the course of 'nature' is allowed to run unguided, babies come in general too quickly for the resources of most, and particularly of city-dwelling, families, and the parents as well as the children consequently suffer. Wide parents therefore guide nature, and control the conception of the desired children so as to space them in the way best adjusted to what health, wealth, and happiness they have to give. The object of this book is to tell prospective parents how best to do this, and to hand on to them in a concise form what help science can give on this vital subject.

Barrier methods, such as the sponge, rubber cervical caps, and condoms are covered, as are methods such as "coitus interruptus," nursing after birth, and the "safe period" (the rhythm method). I like this objection Stopes raises to coitus interruptus:

The great majority of women whose husbands practise this method suffer very fundamentally as a result of the reiterated stirring-up of local nervous excitement which is deprived of its natural physiological resolution. Of the far-reaching effects on the woman's entire organism of the lack of a proper [vaginal?] orgasm, which is generally the result of this method, this is not the place to speak ... [however] the local support and nerve-soothing contact which are supplied mutually to both when the act is completed normally are destroyed.

She was also not a fan of "metal instruments" (a veiled reference to surgical abortion techniques?) and was firm in the advice that one should "NEVER PUT INTO THE VAGINA CHEMICALS YOU WOULD NOT PUT IN THE MOUTH." which seems like fairly solid advice on the whole, particularly considered in the light of the era's encouragement that women use such substances as lysol, carbolic acid as douching fluids.

Here's hoping I can find a volume of Married Love on the $1 carts soon!