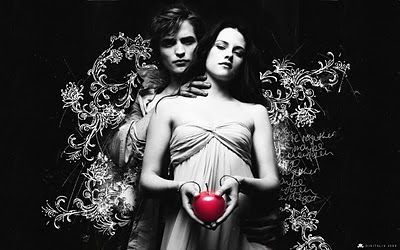 Feminists have a complicated relationship with the Twilight series and fandom, as I have previously documented on this blog. this morning, I'd like to share a couple of items that challenge us to remember that, however retrograde and problematic the series and its surrounding franchise are in terms of gender and sexuality, writing off the fandom as gullible or unenlightened is hardly helpful and (I would argue) hardly feminist.

First, Mathilda Gregory @ The Guardian (thanks to Hanna for the link) reminds us that fans are not necessarily passively imbibing the narratives handed to them -- and it's insulting to the fans (primarily teenage girls and women) to assume they are.

Has there ever been a franchise whose fan base has been so maligned? It's starting to feel like some of the male critics of Twilight are just uneasy that, for once, something that isn't aimed at them is getting such a big slice of the zeitgeist.

Meanwhile, instead of defending the film, some feminists aren't happy either because of Bella's passivity and the tale's theme of abstinence before marriage. Well, OK, author Stephanie Meyer's devout Mormonism does give weight to that reading of the text. But it's not really as simple as that. We can presume a lot about the author's intent, but that's not necessarily the message the films' fans are taking away from it.


The second story, from Amanda Marcotte @ RhRealityCheck comes in the form of a podcast interview with Tanya Erzen about the contours of Twilight fandom. Check out the podcast or, if you can't access audio on your computer, this recent essay by Erzen @ The Revealer about the religion of Twilight fans. Here's an excerpt.

In my interviews and survey of 3,000 fans, the majority express sometimes contradictory beliefs in the supernatural while asserting adherence to traditional religious institutions. Yet, while Twilight won’t replace organized religion, it reflects a longing for sacred and extraordinary experiences in everyday life that are perhaps missing in traditional religious venues. In pilgrimages to Forks, Washington, the setting for the books (in July 2009 alone, 16,000 fans trekked to Forks like supplicants at a holy site, more than the total number of visitors in 2008), fans indulge the fantasy that a supernatural world exists alongside our own, searching for vampires in the woods and lingering outside the re-imagined home of Bella. Rather than fueling interest in vampirism, a concern among some Christian critics of the books, the series provides what Laderman calls “myths that provide profound and practical fulfillment in a chaotic and unfulfilling world.” It’s also impossible to separate these moments of spiritual enchantment from the Twilight franchise, which ceaselessly offers consumption to women and girls as a way to retain the feelings of belonging, romance and enchantment. There are Edward and Bella Barbie dolls, lip venom, calendars, video games, graphic novels, and fangs cleverly promoted and eagerly purchased at conventions and online stores. Yet, the shrines attest to the way fans also transform these objects into something personally vital within the messy entanglements of commerce and enchantment.

The impulse of a lot of feminists (including myself!) is to act to protect young women from narratives we think are abusive by arming them with the skills to deconstruct the Twilight series' sexism and anti-sex messages. However, to assume that young women don't have those skills simply because they have appropriated the stories and continue to enjoy them smacks of misogyny. That is, it plays on the stereotype that women (and young women particularly) are shallow, flighty, clueless and particularly vulnerable to outside influences. That their sense of themselves as persons worthy of respect, as persons smart enough to challenge the messages they're being fed by the media, is uniquely endangered. As Susan Douglas has pointed out recently, there are reasons to be concerned about assertions that young women don't need feminism. But it is also important to make sure that feminism does not become as didactic and authoritarian as the sexist culture we're challenging: exchanging one power-over system with another does not a revolution make.

So I'd argue: be wary of attempts to deride Twilight fans because of their age and/or their gender. And be aware of how criticism of fans -- even if it's not explicitly sexist -- trades on negative and stereotypical constructions of femininity. Like criticizing Hot Girls for being Hot rather than criticizing the culture that rewards them for meeting gendered expectations, making teenagers feel shamed for their reading and viewing choices does little to support their sense of agency and critical self-awareness that (I believe) so essential to feminist consciousness.

posted by annajcook at 9:37 AM