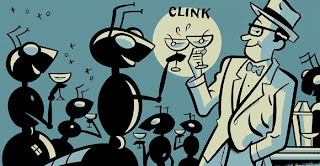 My colleague, Jeremy, receives the print edition of The Atlantic magazine and I happened to notice, yesterday, the following query and response on the back page of the most recent issue (September 2010), in Jeffrey Goldberg's "What's Your Problem?" column.

I’ve noticed that The Atlantic has become very anti-male lately. My proof lies in recent articles by Sandra Tsing Loh, Caitlin Flanagan, and of course Hanna Rosin, whose July/August cover story, “The End of Men,” argued that men will no longer be necessary as our economy changes. How do you protect your manhood while working at a magazine that is so hostile to men?

I take active countermeasures to protect myself against the rampant feminization of The Atlantic. For instance, I eat only what I kill, except for sandwiches from Potbelly, which are killed by someone else. I also chop down the trees that provide the paper on which this magazine is printed, using only an extremely dull axe and my signature bad-ass attitude. Other prophylactic measures I employ include hiring Chuck Norris as a guest blogger, and then firing him, by fax, for being insufficiently manly; and using actual prophylaxis, in the form of a full-body condom I wear to protect myself from the effects of airborne estrogen. I also refuse to participate in the mandatory office-wide “All Guys Have to Wear Jimmy Choos on Fridays” morale-building exercise. And though I was ultimately forced to appear in The Atlantic’s staging of The Vagina Monologues, I purposefully delivered an indifferent performance as Eve Ensler’s labia.

As a feminist, I feel honor-bound to point out that Sandra Tsing Loh, Caitlin Flanagan, and Hanna Rosin are, in fact, often very anti-man (the scene from Parenthood where Dianne Wiest's character says to her daughter, just as her young son walks into the room, "Men are such jerks!" comes to mind) they are often anti-woman as well. Or rather, they tend to subscribe to very gender-essentialist concepts of what it means to be a man or a woman, neither of which serve human beings all that well.

The idea that being anti-male, anti-manhood, and "hostile to men" are all roughly equivalent positions is a fallacy anyway. As a feminist, I'm fairly anti-"womanhood" (since womanhood, in our culture, is a very specific type of cultural performance) and yet hardly anti-women or hostile to women as human beings. Nor do I have a problem with female-bodied persons.

Which is all to say, I love the way Goldberg plays up all the stereotypes of masculinity in his response. Because really, it's about the level of attention all of those articles -- and the concern they seem to have sparked -- deserve.

posted by annajcook at 7:57 AM