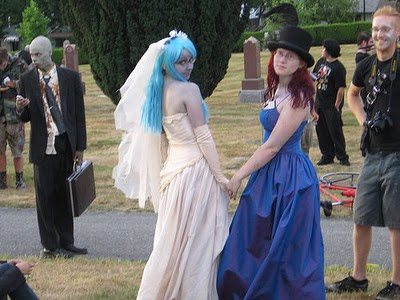 
As y'all are no doubt already aware, United States District Chief Judge Vaughn Walker issued a kick-ass opinion this passed Wednesday that found Proposition 8 unconstitutional and that anti-gay marriage arguments were religiously, irrationally motivated and therefore held "essentialyl no weight" when it came to civil law. (If I didn't have a girlfriend of whom I am so fond, I would kiss the man).

Spiffy @ Hippyish brought us my favorite "waiting for the ruling" post.

I read the opinion with great glee and will be offering some tasty highlights throughout next week. But in the meantime, you can find a 138-page PDF of the full decision available online for your own reading pleasure (and a pleasure it is!) or enjoy Dahlia Lithwick's observations over at Slate.com.

The supports of Prop. 8 have already filed an appeal of the ruling, but this particular decision is far from meaningless just because the case will continue to move through the court system. Thomas @ Yes Means Yes offers us a summary of the 80 "findings of fact" that make up a substantial portion of the ruling and explains why they matter into the future. Mac McClelland @ Mother Jones asks what's next for the Prop 8 case?

A few more notable posts on the ruling:

Aaron Belkin @ Huffington Post | Prop 8 and the Politics of Paranoia.

On Thursday, Elena Kagan became the fourth women ever to be confirmed as a Justice on the United States Supreme Court. Alex DiBranco @ Women's Right Blog observes that now the Supreme Court is one-third female for the first time in history. Dahlia Lithwick @ Slate suggests we may be in for something of a ride.

A group of Republicans is apparently attempting to repeal the 14th Amendment. That's right, the one that guarantees us all equal protection under the law. Amanda Marcotte @ Pandagon explains how this topsy-turvy (and not unfrightening) situation is tied to hysteria over non-white, foreign-born people. Xenophobia and bigotry = NOT COOL PEOPLE.

Another story in the annals of hate, Monica @ Transgriot points out that hypermasculinity is killing our kids. A 17-month-old toddler was killed by his father for not being manly enough.

Jessica Yee @ Ms. Blog writes about how native women were the movers and shakers behind the 2010 Tribal Law and Order Act (passed this week) which will help protect indigenous women from violence.

Ann Friedman @ The American Prospect consider the new workplace sexism and how, even though the more blatant paternalism of the 50s and 60s is a thing of the past, misogyny can still have a negative affect on women's careers. "Often these are men who would never dream of groping, making unwanted advances, or bestowing inappropriate nicknames on their female co-workers, but behind-their-back comments are also intimidation and bullying of a sexual nature."

The American Journal of Obstetrics and Gynecology published a "meta-analysis" of studies related to home birth recently, in which researchers concluded that while outcomes for mothers were good home birth (or rather, lack of intervention at home births) were supposedly related to significant increases in infant mortality. Amie Newman @ RhRealityCheck reports on how (much like with Prop 8!) bias, politics and sloppy research make this latest condemnation of home birthing unworthy of note, and also calls for an end to the "home birth vs. hospital birth" debate.

Where to give birth is hardly the only aspect of parenting that has political ramifications. Rachel White @ AlterNet provides a personal perspective on the kyriarchical elitism of the world of human egg donation.

And Belinda Baldwin @ Gay Right's Blog suggests that the frustration among some queer folks over the portrayal of a lesbian couples' infidelity in The Kids Are All Right might be misplaced. "What if," she asks, "the price of fitting in is the loss of a cohesive group identity?"

The kids might be alright, but sluts, apparently, still don't have a right to be happy. At least if one is to judge from the blowback from Jaclyn Friedman's recent piece on discovering her inner slut -- and enjoying it. Megan Carpentier @ Bitch Blogs muses about how it's still culturally unacceptable for women who enjoy casual sex to, well, enjoy it. Heather Corinna @ Feministe riffs on a similar theme in the post about a one-line email she received which read: "her advice comes from fact that Heather Corinna is a SLUT."

Consistently, it seems to me that one of the characteristics that divides the left from the right (at least in this historical moment) is that while folks on the left are primarily occupied with trying to protect the freedom of individuals to pursue happiness, as long as they aren't hurting others, folks on the right expend freakish amounts of energy attempting to mould the world, pygmalian like, in their own image. You'd think the Christian god might have a thing or two to say about "false idols." But I digress. As an example, Amanda Marcotte @ Pandagon shows how hysterical one conservative blogger got when Jaclyn Friedman wrote a piece about how she'd discovered the pleasures of more casual sex. Somehow, in the conservative mind the words "I enjoy this thing!" turn into "Everyone in the world must enjoy this thing just as I do!" Maybe they insert the chip when you register as a member of the GOP?

And finally: the GOP aren't the only ones who want to stick their noses into other peoples' personal choices. Apparently, there is a Queen's English Society, and apparently they are annoyed by the nomenclature for women's formal titles. Stupid women, for needing so many when men have just one! Let's get rid of ... the most universal of them? Wait! What? Courtney and Adrienne @ From Austin to A&M have more.
posted by annajcook at 8:07 AM