As most of you know, I've been in the midst of moving out of my Simmons dorm this week, and into an apartment in Allston.* I'm very happy to be done with dorm life, and am already planning meals to cook this weekend!

This morning, I commuted in to work on my new route along with my newest accessory--a hand-me-down mp3 player (not the iPod brand) given to me by Hanna (thanks Hanna!) It even plays NPR! I was very excited. Now I look like all the other Bostonian commuters with their little ear buds in their ears. I guess we'll all be ready when the aliens come to colonize our brains.

Since my camera and USB cord are lost somewhere in the shuffle of packing, I don't have any pictures yet of my new digs (it's all boxes at the point anyway!), so I thought I'd post this MadTV clip instead in honor of my not-iPod mp3 player. Many of you have already seen it (and thanks to Brian and Maggie, of course, who introduced me to it last year), but I showed it to Hanna last night and think it's still worth a giggle.

*If anyone who wants/needs my new address hasn't gotten it, shoot me an email and I'll gladly provide it. For obvious reasons, I'm not posting it here!

posted by annajcook at 3:55 PM No comments:


Now that the term is over and I'm starting to recover my faculties, I thought I would treat y'all to a taste of the sort of work I was doing over the term. Cataloging (officially known as "Information Organization"), taught by the legendary Candy Schwartz, was a whirlwind introduction to the principles of information organization. One of my favorite segments of the term was actually the final segment, in which we learned how to assign call numbers to books using both the Library of Congress Classification scheme (LCC) and the Dewey Decimal System.

In both systems, you have to find a single way to characterize the nature of the book as you can: what it's about, what kind of book it is, who it's by, and so on. In each system, there are complicated rules explaining how you locate and construct the call numbers. We had to practice on lots of pretend titles in each system, and at the very end of the assignment Candy had us assign call numbers to ourselves using both systems. I thought I would walk you through how I created these two call numbers as a way of sharing a little bit about how these systems work.

Both LCC and Dewey are subject-based classification schemes--grouping books about like subjects in the same general area. This is clearly a benefit to browsers, who most often go to the library looking for information on, say, fish breeding. So first, I had to pick a general subject area (an individual person encompasses too many subjects to be classified easily in a single area). I tried to find a subject classification that would capture the dimensions I highlight in this blog (the "feminist librarian-activist" self). In both cases, this turned out to be a women's studies-type categorization, though the way each system broke down the idea looks a little different.

In the Library of Congress system, you search through the classification index, which is available online to subscribers, for the topic. As many of you probably already know, LC is call number that is made up of a a letter-number combination. In LCC, the "H schedules" are the social sciences, and any number beginning with "HQ" is a topic having to do with "the family, marriage, woman" ('cause, you know, women naturally belong in the same conceptual category as family and marriage). By reading down the table, we construct the following:

Below this general category is

This means we use the letter-number combination (known as a Cutter number, after librarian Charles Cutter) for the geographic region the "book" discusses. I chose the United States as a whole.

Finally, I create a cutter number so that I can alphabetize the book on the shelf by author. This cutter number consists of the first letter of the last name (C), followed by a number from 2-9 that roughly corresponds with the second letter of the name (O).

So I--or perhaps this blog--could be given the call number of HQ1186.U6 C7, meaning "a resource dealing with women's studies research and teaching in the United States."

The Dewey system is similar, but only uses numbers, rather than letter-number combinations, until one reaches the cutter number for authors (again, C7 for Cook). Dewey uses the numbers from 0-999 in groups of 100s (so we talk about "the 100s" or "the 300s" as a unit). The 300s are the social sciences:

Which are then broken down further,

In Dewey numbers, a decimal point always follows the first three numbers for readability (like the way a phone number, at least in the U.S., is always given in 3-3-4 combination).

Since I wanted to specify my interest in feminist history, I added the "09" designation, which is the standard number for "history and geography" that can be added to any subject classification.

While I'm not ready to become a professional cataloger, I have to admit there's a great deal of satisfaction in puzzling out how to classify and order things (hey, this is the woman who has her personal library arranged by LCC call number). And now, if I ever happen to be turned into a book by a nefarious curse or inadvertent spell, I will have the call numbers to ensure I'm properly shelved.

posted by annajcook at 11:12 PM No comments:

Email ThisBlogThis!Share to TwitterShare to FacebookShare to Pinterest
labels: simmons


The Massachusetts Historical Society (where I work, ahem) was involved in the HBO miniseries based on David McCullough's biography of John Adams. In conjunction with the television show, we are hosting a small exhibition of correspondence from our extensive collection of Adams family papers. As an experiment, some of the staff put together this short YouTube video, hosted by our head librarian Peter Drummey.

posted by annajcook at 1:00 PM No comments:

Getting My Legal Fix


Last week, when the Michigan Supreme Court upheld the ban on same-sex partner benefits, I was so tired from the end of term I didn't have the energy to care much (and really, it wasn't that unexpected). However, this Thursday brings happier news: the California Supreme Court has ruled their own state's ban on same-sex marriage unconstitutional. The legal junkie in my is having fun perusing some of the coverage. I love it when people (most especially those I agree with!) get snarky in legalese:

Furthermore, the circumstance that the current California statutes assign a different name for the official family relationship of same-sex couples as contrasted with the name for the official family relationship of opposite-sex couples raises constitutional concerns not only under the state constitutional right to marry, but also under the state constitutional equal protection clause. . . the purpose underlying differential treatment of opposite-sex and same-sex couples embodied in California's current marriage statutes--the interest in retaining the traditional and well-established definition of marriage--cannot properly be viewed as a compelling state interest.

Couldn't have said it better myself.

Oh, and my favorite legal news story of the week* might be this one: NPR's On the Media reported that Scott Bloch, the head of the Office of Special Counsel, whose office was raided this week by the FBI amid allegations of corruption, accused the Bush Administration of "being part of a gay rights conspiracy to persecute him." Who knew?

(*via the blog Pandagon)

posted by annajcook at 3:31 PM No comments:

Courtesy of The Onion
posted by annajcook at 3:21 PM No comments: 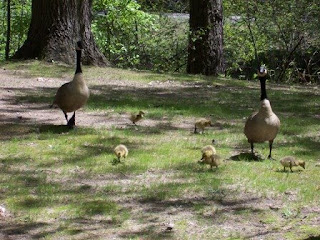 I was walking between the Longwood T stop and North Hall this afternoon, when I happened to spot this family of Canada Geese. Awww . . . .

posted by annajcook at 9:15 PM No comments: 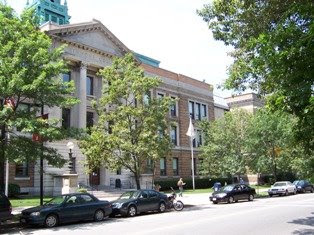 So yesterday, I turned in my last paper and handed off my oral history interviews to the Oral History Archive. I'm done with the semester! Hooray! It's hard to believe that a year ago at this time of year I was still in Holland, working at Barnes & Noble, and had three months to go before moving to Boston . . . a hell of a lot has happened in the last twelve months, and I'm looking forward to some time over the summer to sit back and take stock.

posted by annajcook at 9:00 PM No comments:

Email ThisBlogThis!Share to TwitterShare to FacebookShare to Pinterest
labels: simmons


This weekend, I'm working away on one final history paper on mid-twentieth century feminist historians and Native American women's history--if you're interested in details, check back in a month when I have more perspective! But in the part of my brain not preoccupied with academic writing, I'm happily assembling the beginnings of a summer reading/viewing list. At the top are . . .
So I'm sure I will have no trouble filling my leisure time . . .

I have a few other more substantive post ideas that I hope to work on after my brain recovers--check back in a couple of weeks.

posted by annajcook at 8:41 PM No comments:

Email ThisBlogThis!Share to TwitterShare to FacebookShare to Pinterest
labels: books, fun, movies
Newer Posts Older Posts Home
Subscribe to: Posts (Atom)
"The past is a wild party; check your preconceptions at the door." ~ Emma Donoghue, Inseparable: Desire Between Women in Literature (5).