Quote of the Week: Is it over yet?


Hard to believe we're less than a week away from the end of what has seemed like a never-ending campaign season. Before going home on this Friday evening to wrap up in bed with blankets, a bowl of chocolate ice cream, and Neverwhere (in honor of Hallowe'en), I leave you with Jon Carroll's incisive political commentary:

I want it to be next Wednesday. I want Obama to win, and I want to start getting fretful about something else. Imagine what mischief George Bush is going to attempt between now and Jan. 20. He's gonna pre-pardon everybody for everything. He's going to kill endangered species with his bare hands. He's going to deforest entire states. Now, that's gonna be terrible, but there will be a date certain, as they say, when he has to go back to Texas and do - well, pretty much nothing, is my guess. Jimmy Carter he ain't.

Find the whole column over at the San Francisco Chronicle: Election Jitters.

posted by annajcook at 5:05 PM No comments:


Today in the world history class for which I am a teaching assistant, we discussed an excerpt from Karen Armstrong's history of the axial age religions, The Great Transformation. The professor brought in this twenty-minute video clip of Karen Armstrong's speech accepting one of the three 2008 TED Prizes "to change the world." I thought it was a nice introduction to some of her recent thinking on religion.

posted by annajcook at 9:33 PM No comments:

Boston With My Folks


Mom and Dad finally had the chance to visit me in Boston this weekend, and Dad--as usual--brought gorgeous autumn weather with him for the duration of their stay (although he also brought the first cold snap of the season). Mostly we wandered around my usual haunts, got food at my favorite coffee shop (the Boston Beanstock Co.) and pastry shop (Mike's Pastry) in the North End, and visited lots of bookstores (because what else does our family usually do on vacation but hunt for books!). We also stumbled into the Boston city Camp Sunshine Pumpkin Festival and the Head of the Charles Regatta. You can see pictures below.

posted by annajcook at 2:00 AM No comments:

If You Love Wallace & Gromit


Hanna has claimed--entirely appropriately--the finder's credit for first spotting this rather indescribable artifact of 1960s British television on a Dr. Who episode [Update: Hanna says it's "The Sea Devils"]--and later coming across a blog post (I'm sorry! I've misplaced the link), which led us to this adorable-yet-strange British stop-motion animated series called The Clangers.

This two-series show (which ran from 1968-1972) is made up of ten-minute episodes featuring the Clangers, a race of small pink knitted aliens, and a cast of characters including the Soup Dragon, the Iron Chicken, the Hoots, the (terrifying) Froglets, and the Music Note Trees.

Here is the episode called "The Treasure":

While the complete series is only available from the UK on Region 2 DVDs, you can view a number of episodes on YouTube:

And Hanna's favorite, The Iron Chicken.

They make great study-break or bedtime viewing. Just the thing by which to nod off over a mug of whiskey-laced hot chocolate with vanilla marshmallows.

posted by annajcook at 10:00 PM No comments: 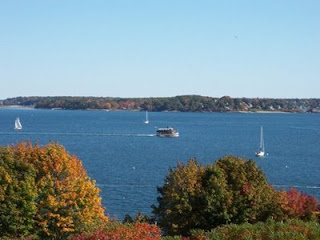 Portland, Maine, that is (clearing up any confusion for you West Coasters). Hanna and I rented a Zipcar today and drove up to Portland (three states in two hours!) to meet her parents for the morning and early afternoon. We started at the local Starbucks -- oxymoronic as that may sound -- and rambled around through the bookstore, L.L. Bean outlet, and various shops before picnicking down by the ocean. 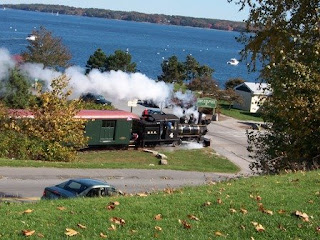 While eating lunch, we chanced to see a small steam train which ran on a narrow-gauge track along the harbor! And we also enjoyed a bit of casual leaf-spotting; Boston's trees turn color but we're often not outside in the middle of a sunny day to enjoy them! 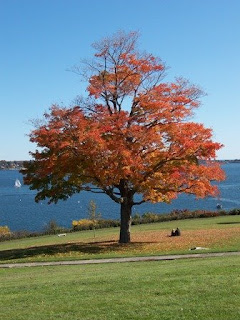 posted by annajcook at 11:30 PM No comments:

Ref. Book of the Week: Dictionary of Bias-Free Usage

I have a mountain of sources to review and annotate for my reference class this semester, and I thought it would help to keep myself on task if I got to choose a particularly interesting, amusing, and/or valuable book each week to highlight on the FFLA. So here's installment number one: The Dictionary of Bias-Free Usage. (This was going to go up on Monday, but as you can see I'm already lagging behind on my self-assigned task!)

So, confession of a word nerd: I love dictionaries. Looking up an unfamiliar word is usually a welcome excuse to browse in my Shorter Oxford English two-volume dictionary. So one of the greatest perks of being a librarian -- and a reference librarian in particular -- is the pleasure of mucking about in dictionaries. So I knew I was going to have fun when one of the dictionaries on our review list for Reference was Rosalie Maggio's 1991 Dictionary of Bias-Free Usage: A Guide to Nondiscriminatory Language.

This dictionary is actually a combination style guide and thesaurus along with a dictionary of some 5,000 word entries. Rather than being a straightforward "meaning and etymology of this word" dictionary, Bias-free attempt to provide cultural context for how the word has been used and why people object to it. In example:

LADYLIKE. Avoid. The word lady is generally unacceptable, and 'ladylike conveys different meanings according to peoples' perceptions of what a woman ought or ought not to do, say, think, wear, feel, look like . . . (159)

Or this one, even more strongly worded:

SLAVE GIRL. Never use. In addition to its unpleasant associations with slavery, this sexist, racist term perpetuates the false notion that women secretly enjoy being enslaved (252)

Maggio also includes definitions for terms related to discrimination ("sexism," "homophobia"), demographic information in relation to professions and experiences -- so that chosen pronouns can accurately reflect reality -- and "key concept" entries which read more like short encyclopedia articles (the entry on "rape" for example, provides statistics and discusses cultural narratives surrounding rape). Her overall goal is to assist writers in editing their work for language and metaphor that is rooted in discrimination of one sort or another (sexism, racism, etc.).

It's easy to make fun of the earnestness with which this guide was put together, as well as the author's obvious value-judgements which are contained within each entry. Skeptic that I am, it is difficult to see how such injunctions as "never use" are applicable for any word, because words change their meaning according to context. While "slave girl" would be a highly inappropriate description of, say, a modern-day woman, if one is an historian (coughcough) writing about a child who was enslaved, "slave girl" may simply be a description of the individual based on age and class status. Similarly, because of the historically-specific context in which all printed dictionaries are compiled, usage and cultural meaning can quickly become out-dated. This is particularly true of politically-charged language such as is found in the Bias-Free dictionary. The use of the word "queer" in relation to sexual identity and action had a not-unrelated but significantly different cultural meaning in 1991, for example, than it does seventeen years later.

All of its shortcomings aside, the word-nerd within me enjoys reading the Bias-free in order to think about how words were perceived at this one particular moment in language and political history (during the late 1980s and early 1990s). And my feminist self applauds the intention behind the work, if not its somewhat clumsy execution.

posted by annajcook at 4:00 PM No comments:


How not to use a moustrap: 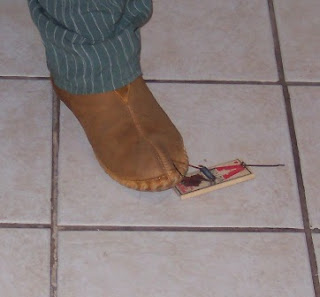 "Some circumstantial evidence is very strong, as when you find a trout in the milk."

posted by annajcook at 4:00 PM No comments:


For my history class, we had to choose a public history site connected to the transcendentalist movement to visit and report on; my friend Laura and I chose Fruitlands, the site of the short-lived (eight-month) utopian experiment undertaken by Bronson Alcott, his long-suffering wife and children, and a British friend Charles Lane. Below are the pictures I took on the museum grounds and at the apple orchard we stopped at on the way home. (The third individual evident in the pictures is Laura's roommate Ashley).

To see a larger slide show with captions, click here.

In keeping with my promise-to-self to have a non-school-related book going at all times during this semester, this week I read Robin McKinley's latest work of fantasy fiction, Chalice. I am still waiting patiently for a sequel to Sunshine -- when Robin when?! -- which Chalice is not. It is also not as inventive an alternate world as the one found in Dragonhaven(which I discussed here). However, Chalice harkens back to many of her gentle fairy tale stories collected in Door in the Hedge or Knot in the Grain. It is the story of a young beekeeper, Mirasol, who is unexpectedly called from her home to become "Chalice," one of the Circle of mages who protect her homeland; and the story of the unexpected friendship she forms with the new Master mage, a fire priest who is no longer quite human. It was just the thing for a relentlessly rainy weekend at the end of September.
posted by annajcook at 1:00 PM No comments:

Best News of the Week

I talked to my parents last night back in Michigan -- which has been a tight swing state in recent election cycles -- and they reported that the McCain campaign is so far behind that they're pulling out and leaving the state to Obama & co.! Aside from hearing that Brian and Renee have adopted a puppy, I think this might be the best news to come by way this week. Go Michiganders!

*image borrowed from handmade detroit via the sweetie pie press.
posted by annajcook at 10:00 AM 2 comments:

Email ThisBlogThis!Share to TwitterShare to FacebookShare to Pinterest
labels: election08, michigan, politics
Newer Posts Older Posts Home
Subscribe to: Posts (Atom)
"The past is a wild party; check your preconceptions at the door." ~ Emma Donoghue, Inseparable: Desire Between Women in Literature (5).