in love with new blogs: Natasha Curson - a trans history 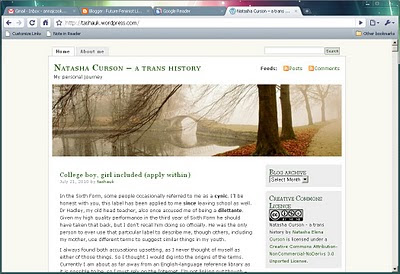 A while ago, I gave everyone a head's up on the sunday smut list that my e-friend Tasha had started a new blog, Natasha Curson - a trans history where she is slowly but surely posting snippets of her personal history, one episode at a time. As she wrote in her most recent post, the first telling

I find it hard to recognize the person taking those first faltering (and in the end failing) steps outside of the closet at the age of 21. Or, to put it another way, there’s a lot I recognize about him – his taste in books and music for example – but not a lot I recognize about her, the woman struggling to emerge, the state she was in at the time. Even a few months after transitioning things felt so different to me that it quite quickly became hard to imagine how I had managed to cope with carrying that burden. Now it has started to become difficult to remember – not what happened, but how it felt sometimes.

The stories, for obvious reasons, often revolved around gender identity, but cannot be reduced to a single plotline. Take, for example, these snippets about her schooldays and move to university in Manchester.

From back to schooldays

Summer passes and I am, predictably, rejected by all my chosen universities because I only have two A-levels, one of them a bare pass. This is seen by all and sundry, including myself, as awful news. I have a summer job at the carpet department of Fishpools which, as you all now know, is not Selfridges to tide me over, and then I have to decide what to do next.

As the autumn of 1977 arrives I attempt to study History A-level by correspondence course. This is a dismal failure – sitting in my bedroom with the textbooks and tasks they send I just can’t motivate myself. At least I am sensible enough to figure this out by myself and realize that if I’m going to get to university I need to adopt another approach. I have no real idea why I want to go there. It is just expected, although I will be the first in my family to do so. I am hoping English Literature at university will be as exciting as the A-level was. When I finally get there, this turns out not to be the case ...

And from college boy, girl included (apply within)

It’s now September 1978 and I’m not feeling especially cynical but possibly slightly Cynical. I’m looking forward to going to university to study English, my favourite subject. I’m hoping it will be as exciting to study it in Manchester as it was at A-level. I’m also looking forward to being away from home, although I have only the most tenuous understanding of what that may be like. Moving to a safe distance from the deteriorating relationship between my two parents, which also manifests in an increasingly problematic relationship with me, seems like a plan. I pack my trunk full of books and clothes and box up my hi-fi and they get sent slowly to Manchester by rail. I leave after them but arrive before them. Rail freight in those days is pretty slow and clunky.

. . . Teaching...is variable. Tutorials (again Oxbridge style) are often OK, depending on the tutor. Lectures are often dull. I remember one particular lecturer on Shakespeare, although I forget his name. He would read dialogue from the plays with his two index-fingers raised and proceeded as follows.

In tutorials, this same lecturer would sigh about Shakespeare and say “Well, I suppose we must see the plays performed sometimes”, i.e. he’d really rather that didn’t have to happen and we could just sit in our rooms and contemplate the texts. This kind of thing sets the tone for me – some (though not all) of the lecturers would really rather the rest of the world would just stay away. In my second year there is controversy along the departmental corridors when Monty Python‘s Terry Jones has the cheek to write a book on Chaucer. Dilletante. I remember one of my tutors talking angrily (and inaccurately) about that naughty man "Terry Palin."

Partly, I think, I'm drawn in as something of an Anglophile by the every-day details, place names, and events that flesh out Tasha's stories. For example, in flirting with the scene

I remember two shopping expeditions in particular – one to a shop on Walthamstow High Street, where the assistant asks whether I am buying these clothes for my girlfriend. Yes, I answer nervously and she replies (somewhat knowingly I think) that she hopes my “girlfriend” likes them. Some more relaxed purchasing takes place in Miss Selfridge on Oxford Street, where I feel more anonymous and less likely to bump into anyone I know. As is often the case with those who crossdress, I have a tendency to buy highly feminine clothes, and mostly evening or partywear. I make some dreadful mistakes but in Miss Selfridge I actually make some tasteful purchases. Wendy helps me buy some shoes by proxy – I am never brave enough to try anything on and draw the line at marching up to the checkout with a pair of high heeled shoes.


I mean, really. "Miss Selfridge on Oxford Street"? "Walthamstow High Street"? Even I might be cajoled into shopping for high heels in a location like that!

posted by annajcook at 6:53 AM

Email ThisBlogThis!Share to TwitterShare to FacebookShare to Pinterest
labels: in love with new blogs, sexual identity