a few things on education 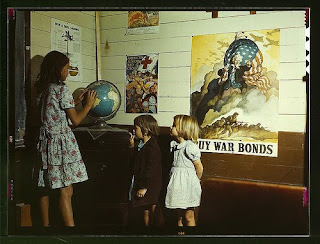 Rural school children, San Augustine County, Texas, April 1943
Library of Congress Photostream @ Flickr.com.
There've been a handful of stories coming across my feeds the past few weeks on the subject of education and culture; none of them have inspired me to a full-length blog post, but I wanted to share them with you anyway. So here's a round-up of links with some snippets. Enjoy!

Idzie @ I'm Unschooled. Yes I Can Write | The Myth of "Social Awkwardness" Among Homeschoolers & Unschoolers.

I have seen absolutely no difference [generally] between homeschoolers, unschoolers, public schoolers, or private schoolers, EXCEPT that the unschoolers who do have to work harder with social stuff are generally far more confident, far more aware of their worth, whereas the schooled people are often made to think that they're losers, that they're uncool, so have serious feelings of worthlessness. Really? That's what school has to offer kids that you're so upset un/homeschoolers are missing out on: making anyone who doesn't fit a very narrow definition of normal feel like they're a failure??


eastsidekate @ Shakesville | College: The solution to everything.

Creating jobs is not about intelligence or education. It's about having enough money to pay someone to do something. And :drumroll:.... having money is not exclusively a function of being educated, intelligent, good-smelling, or anything else, really. Of course, if we argue that wealth is solely a function of merit (as measured by education, which we assume is a function of intelligence), then yeah, it's pretty much axiomatic that a more educated populace will create more jobs.

If we realize that some folks who have a lot of money and power to burn aren't necessarily deserving of such, the wheels fall off in a hurry.

Richard Jeffrey Newman @ Alas, a Blog | The Politics of Education.

The content of education is always, always, political and there will always be someone somewhere who thinks her or his perspective has been left out of what children are taught, to their detriment as individuals and to the detriment of society as a whole. Independently of that, though, I am a big believer in trying to find as many ways as possible to include as many perspectives as possible in the classroom, not to make the point that they are all equally valid, but to make the point that the more informed we are about those perspectives, even the ones that have been shown to be invalid, the more responsible and accountable we are likely to be in our own perspectives.

[The] student ... complained to the Department Chair of Religious Studies that the professor was encouraging and expecting students to apply (Catholic) Natural Moral Law as their understanding of natural law. "I didn't go to Notre Dame for a reason," he signed. The professor's email to his students, also apprehended by the local newspaper, did claim that "none of what I have said here depends upon religion," alongside an unqualified encouragement to apply (Catholic) Natural Moral Law within their own adult thinking.

And, 'cause I'm starting to think about what the next scholastic endeavor will be after library school ... sexademic @ The Sexademic | So You Want to Be a Sex Educator ("Sexademics do it theoretically").