There's a wonderful scene in the British sitcom My Family in which the parents (Ben and Susan) attempt to speak with the parents of a child who is bullying their son. The other parents are having none of it.

"Now we know you think of yourselves as good parents--" one of them begins to say condescendingly to Ben and Susan.

Susan and Ben look at each other. 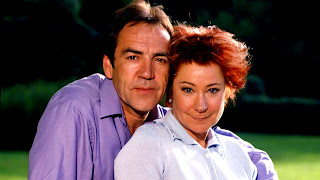 It is in that spirit, I offer you the fabulous Anne Lamott @ Salon on why she hates mother's day

I hate the way the holiday makes all non-mothers, and the daughters of dead mothers, and the mothers of dead or severely damaged children, feel the deepest kind of grief and failure. The non-mothers must sit in their churches, temples, mosques, recovery rooms and pretend to feel good about the day while they are excluded from a holiday that benefits no one but Hallmark and See's. There is no refuge — not at the horse races, movies, malls, museums. Even the turn-off-your-cellphone announcer is going to open by saying, "Happy Mother's Day!" You could always hide in a nice seedy bar, I suppose. Or an ER.

Don't get me wrong: There were times I could have literally died of love for my son, and I've felt stoned on his rich, desperate love for me. But I bristle at the whispered lie that you can know this level of love and self-sacrifice only if you are a parent. We talk about “loving one's child” as if a child were a mystical unicorn. Ninety-eight percent of American parents secretly feel that if you have not had and raised a child, your capacity for love is somehow diminished. Ninety-eight percent of American parents secretly believe that non-parents cannot possibly know what it is to love unconditionally, to be selfless, to put yourself at risk for the gravest loss. But in my experience, it's parents who are prone to exhibit terrible self-satisfaction and selfishness, who can raise children as adjuncts, like rooms added on in a remodel. Their children's value and achievements in the world are reflected glory, necessary for these parents' self-esteem, and sometimes, for the family's survival. This is how children's souls are destroyed.

I encourage you to read the whole piece at Salon.

I've written a few blog posts lately about seeing children as people, rather than -- as Anne Lamott puts it -- "adjuncts" of parental or adult objectives. I believe, as Lamott writes here, that such objectification of young people is destructive to the soul.

But today I'd like to focus -- as Lamott does here -- on what harm the stories we tell ourselves about parents do to adults. And the particular effect they have on the way we (as a culture) percieve those of us who are (whether by accident or design) not-parents.

And I've chosen to use the phrase "not-parents" instead of "childless" or "childfree" deliberately, because I am starting to believe that this narrative of parents vs. not-parents has little to do with children and everything to do with adults. With our cultural assumptions about what it means to be a responsible grown-up human being in the world. I believe it has everything to do with the way adults past a certain age (roughly post-college) are read culturally by those around them, for signs of parent or not-parent status, and judged by a set of cultural assumptions about what it means to lack (or forego) experience of the parenting role.

The assumptions are not pretty.

I've become much more aware (often hyperaware) of these constant "non-parent = bad" messages since I've been partnered with someone who does not wish to parent. As a child, I wanted to be everyone's mother: I parented pets, my siblings, my next-door neighbors. I had fantasies about adopting orphans from war-torn Sarajavo, birthing multiple babies I'd hoist on my back and carry with me as I explored the globe. I was an adventurer, a take-charge tomboy (although my parents never employed the word, and bless them didn't blink when I announced plans to be a princess who was also a lumberjack in the local arts center play) while also being a caretaker and nurturer.

And I was absolutely rewarded, socially, for that behavior. Adults marveled at how "good" I was with children, and trusted me with the responsibility of looking after young ones. I fit the story, so I was slow to challenge it. Plus, my parents have never been pushy with any of us kids about getting married or becoming parents ourselves (thank you Mom and Dad!); I never felt any direct familial pressure to find a partner and somehow acquire offspring for them to grandparent, carry on the family line, or somehow fulfill my destiny as a female-bodied person. But, because I am capable with young people, because I am generally patient with those around me (often to a fault), I can fill that caretaker role people expect of women in the world -- even women who are not obviously attached to the children who happen to be in their vicinity. And most of the time, at least on a casual basis, I'm willing.*

So I was sheltered, personally, from the stigma of being a Woman Who Didn't Want To Be a Mother. But now I see (or at least try to see) the world through Hanna's eyes some of the time, and I've been thinking a lot more about our culture's obsession not just with a certain image of young people as Children (to be feared or commodified), but of adults as Parents (who are either "good parents" or "bad parents," not simply...parents).

Not-parents have no space in this world of Parents and Children. Or rather, their position in the world is analogous to that of the Old Maid in relation to Wife: "life: FAIL."

I'm speaking here, I want to emphasize, in terms of cultural narratives, not actualities. There have been some amazing not-parents (both women and men) in my life. I will be forever grateful to them for modeling the possibility of having an adult life rich with relationships that does not depend on the role of full-time parent. This is about perceptions and stereotypes, which -- although they do not dictate our material realities, do narrow the range of possible stories we have at our disposal when trying to explain our life choices, to ourselves and to others. As Anne Lamott writes: "Ninety-eight percent of American parents secretly feel that if you have not had and raised a child, your capacity for love is somehow diminished."

I'd argue that many not-parents also believe this about themselves and other not-parents around them, in the same way that women are often each others' harshest critics when it comes to complying with beauty standards or men punish each other for displays of emotions other than anger. In our culture, to be unaccessorized with children means one is broken in one of the most profound ways a human being can be broken: it means that one's "capacity for love is somehow diminished."

I'm not okay with this story. I am not willing to accept a narrative of humanity that implies my partner -- who does not want to be a full-time parent -- is somehow broken, that she lacks compassion and the ability to love. It is, quite simply, not true. She has a HUGE heart for the world, sometimes so attuned to its sufferings that I am humbled by her capacity for empathy.

And I'm not okay with a cultural narrative that requires she perform extra cultural work to prove that -- despite her decision not to parent -- she is, in fact, not broken, not selfish or heartless, or incapable of loving.

These stories we tell each other, which privilege certain relationships and roles over other relationships and roles seems on the surface to be to the advantage of a certain group of people (in this case parents) over another (not-parents), but in the end it only serves to punish all of us for not living up to the ideal Good Parent in the collective imagination, rather than acknowledging that at the end of the day most of us are "just parents," "just human," and have at our disposal myriad opportunities to express love and care for others regardless of the kind of relationships with nurture.

Let's celebrate those qualities, human qualities, that are not contingent on performing certain pre-determined roles (Good Mother, Good Father, Good Child) or being handed certain responsibilities, held to certain expectations, that go with those roles. Let's instead celebrate the boundless capacity of all of us human beings to engage in loving, nurturing activities throughout our lives.

That's a celebration I could get behind.

*As I said in my last post on bigotry towards children, I'm not, at the moment, planning to commit to the full-time parenting thing.