the politics of (another kind of) choice 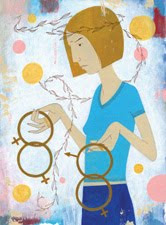 As a follow up to my letter to the Hope College Board of Trustees last week, I thought I would share a great article on queer politics found via the Bookforum (h/t to Hanna). Stephanie Fairyington @ Utne Reader offers a passionate, personal plea for queer activists to re-discover the language of choosing non-straight relationships and identities, in her essay The Gay Option.

Until homosexuality is cast and understood as a valid choice, rather than a biological affliction, we will never rise above our current status. We will remain Mother Nature’s mistake, tolerable (to some) because our condition is her fault, not ours.

By choice, I don’t mean that one can choose one’s sexual propensities any more than one can choose one’s personality. What I mean is that it’s a choice to act on every desire we have, and that acting on our same-sex attractions is just as valid as pursuing a passion for the Christian faith or Judaism or any other spiritual, intellectual, emotional, or physical craving that does not infringe on the rights of others. And it should be respected as such.

Fairyington acknowledges the enormous political advantages of framing non-straight sexuality as natural, rather than nurtured, proclivity -- and she doesn't reject the possibility (confirmed by her own personal experience) that one's sexual orientation is something one is born with, and is immutable.

At the same time, she challenges us to recognize that this political strategy -- which has made real gains for the human rights and legal protections of non-straight, non-gender conforming folks -- is a claim to rights that relies upon queer sexuality being a biological trait does not require those with anti-gay sentiments to re-examine their understanding of homosexuality as a physical or emotional deformity: rather, it is a framework perfectly adaptable to their claims to success in ex-gay therapies or a quest for "the gay gene" which could somehow be manipulated to alter someone's sexual desires.

The typical conservative assault on homosexuality casts it as a sinful choice that can be unchosen through a commitment to God and reparative therapy. And the left usually slams into this simplistic polemic by taking up the opposite stance: Homosexuality is not a choice, and because we can’t help it, it’s not sinful.

By affirming that homosexual practice and identity are a choice, we can attach an addendum—it’s a good choice—and open the possibility of a more nuanced argument, one that dismantles the logic of the very premise that whom we choose to love marks us as sinful and immoral and interrogates the assumption that heterosexuality is somehow better for the individual and society as a whole.

I grew up in a very conservative community (although my family and immediate circle of friends were by-and-large liberals), and I'm aware of how powerful the biology-based identity argument is when it comes to challenging folks' assumptions about homosexuality = sin. Because arguing that someone is "born that way" draws parallels to skin color and biological sex -- it seems like an easy hook. But likewise, I've also seen how the biological argument so often misses the point that the anti-homosexuality crowd is making. In short, the point that Fairyington makes above: that we selectively choose to act on our desires, and that those choices have moral and ethical implications. We may have thoughts of violent revenge, but choose to practice nonviolence. We may have thoughts of panicked self-defense, but choose to practice compassion.

If queer activists rely solely on the "it's biology" argument, we miss the opportunity to make a moral and ethical case for same-sex relationships, and the capacity of those relationships to add to the sum total of joy and well-being in the world. This is a message much more radical, when you stop to think about it, than scientific debates over the origins of human sexual orientation. Those scientific explorations are stimulating from an intellectual perspective, but will not satisfy our desire as human beings to discern right from wrong. A scientific answer to the question of where same-sex desire originates may inform, but cannot dictate, what we do with those desires.

I think we would do well, as Fairyington proposes, to speak more often and with great passion about the ethical, life-giving nature of our relationship choices. We would do well to speak about following our passions for the sexual relationships that best nourish us and our loved ones. To speak about the way in which feeling at home in our skins when we move through the world grows our capacity for compassion for others (because we no longer have to work so hard to protect ourselves). To speak about the glorious, chaotic uniqueness of every human life, and how all of those lives (ours included) can honor [chosen diety or spiritual path here] through all manner of consensual sexual activities and relationships.

This in no way contradicts the notion that sexual orientation (be it hetero, homo, bi, or otherwise inclined) is biological in nature -- but it does not rely on it either. Using both together, mixing and matching as reflects our own personal experiences, will hopefully broaden our options for political debate and give us a much stronger, multi-faceted place at the table.
posted by annajcook at 7:08 AM