arbiters of the appropriate? more on kids and public space 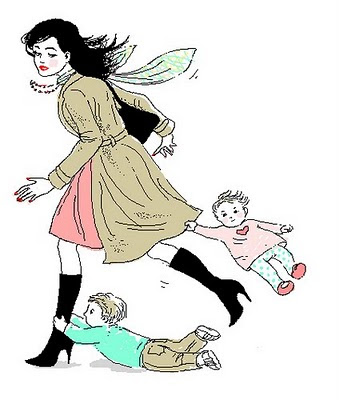 Irrational Point @ Modus dopens has a great addition to the conversation about why saying you "hate children" is problematic, and why debates about children in public spaces so often miss the mark (on both sides of the chasm!).

She makes a list of thirteen ways she sees people talking about children and/or parents in public spaces that she believes are discriminatory. They're all worth reading and thinking about as we move through the world (and the internets), but I wanted to highlight a couple of particular ones.

People who think that all fussing, "noisy," or "socially inappropriate" behaviour is misbehaviour get very little sympathy from me. Children may fuss because they are legitimately upset or uncomfortable. It’s not, like, totally unheard of for adults to raise their voices when they are upset either. Children may be a bit noisy because they have little concept of the noise they make (something which applies to many adults too). Children may display "socially inappropriate" behaviour just because, well they haven’t learned all that stuff yet, what with being little kids and all. Some adults haven’t learned them either.

I think this is particularly important to remember for two reasons.

One is that any one person's idea of "socially inappropriate," stopping short of one person attacking another (physically, materially or emotionally) is very subjective. We all have our own options about what kind of behavior crosses the line of what's public and private. Sure, we can make our opinions known (i.e. "people who talk on their cell phone in the subway drive me crazy!"), and sure we can have conversations about how to share public spaces with others...but assuming we have the right to be the arbiters of what is or is not "appropriate" in public is a huge presumption. IP goes on

Statements of the form "x shouldn’t go out in public if y" make me distinctly uncomfortable because they assume that public spaces somehow belong to the speaker or the speaker’s Kind of People, and they get to decide who uses the public space. No deal. Public spaces get to be used by everybody — the clue is in the word "public."


Many of the folks who assert their "right" (or at least desire) to be segregated from young people in public spaces are the same folks who speak out stridently against segregation according to race, gender, able-bodiedness and many other ways in which human beings discriminate against each other. I really do hope that we can start moving toward a better understanding of how these debates about where children do and do not belong -- and how they should be "controlled" or "behave" when they are there -- employ narratives of exclusion (exclusion, I would argue, often based on similar fears of the Other and the desire for social control) strikingly similar to narratives used to justify excluding women from male spaces, men from female spaces, people of color from white spaces and so on.

Which brings me to the second point I want to highlight. Beyond the dangers inherent in trying to arbitrate who does and does not belong in public spaces (you want only people over twenty-one at your wedding? your prerogative), the "I don't want children in X space" argument is a form of Othering. It moves us away from focusing on a particular human being in a particular situation (whose actions may be an understandable response to situation Y) and instead draws upon our assumptions about children and about how "they" behave in public. The child sobbing in the cart behind you at the grocery store becomes The Child -- representing all children, everywhere -- who (in our minds) is incapable, simply because they are Child, of behaving "appropriately" (see point one) in public.

As IP points out in comments, musing about the importance of designated quiet spaces (on commuter trains, for example)

When I’ve worked with disabled kids, having a space that’s set aside as a "quiet room" can sometimes be really important. Kids can get too stressed out if there’s lots of noisy shouting and playing, just like adults can. So it’s not like the desire for some quite time is unique to adults, nor is quiet behaviour unique to adults.

The important thing, I think, is not to have entire classes of spaces (eg, restaurants) defined as “quiet” or “for grown-ups”, because that rules out too many people, and isn’t consistent (adults do talk, and laugh and play music in restaurants. Why shouldn’t kids?)

We hear a child screaming and instead of imagining that the child -- as one particular human being -- may have a good reason for being upset (don't we all have bad days??) we ascribe the behavior to individual child as a group character trait. We stereotype. And in stereotyping, we lose site of the individual person. We dehumanize. We want this class of thing (Child), which we imagine incapable of any other type of behavior, out of our space where it is disrupting our lives.

And because of this animosity and impulse toward dehumanization on a cultural scale* the child (and by extension, the parents in many cases) cease being able to move through the world as human beings -- who have good moments and not-so-good moments, highs and lows -- and start bearing the burden of Ambassador for One's Kind. It's like being the one guy in a women's studies class, whom everyone turns to (completely unfairly) for the Male Perspective. Or being the one woman of color. The one queer.

Hey, I'm glad that some people are able and willing to take on this role -- and possibly by being a good ambassador help people think twice about their own prejudices and preconceptions. But I don't think it's the responsibility of all children and parents to be constantly, 24/7, model citizens.

As IP writes, "People who say 'I don’t have to want kids...' are right. You don’t have to want kids. And accommodating kids ain’t the same as saying you have to want to have kids." Too often, it seems like, this conversation about children in public spaces turns into a mudslinging match over whether or not people who do not wish to be parents or caregivers are lesser human beings, less capable of love and compassion (see my post on the problem with Mother's Day). People on both "sides" of this supposed dichotomy ("kids are angels" vs. "kids are demons") fall into this trap. And in my opinion it detracts from the larger human rights issue, which is that children aren't angels or demons, but simply people with the right to exist in public spaces just like the rest of us.

Sadly, as people have been pointing out in comments over at Modus dopens, all too often these conversations end up devolving into a scrabble for what are (rightly or wrongly) perceived to be precious and limited resources: a quiet park bench, a space on the bus, the attention of a sale's clerk, right of way on the pavement. As ommenter Ariane writes

When we advocates of children's human rights speak about the importance of treating children as people, often what is heard by skeptical listeners is the message that children and children's needs are more important than adults (read: more important than them). What skeptics hear instead of "children are people with human rights" is, "children are extra special people who have the right to be the center of attention always and never be asked to treat others with care and compassion."

I've been thinking a lot lately about what to do about this mis-communication. And, to be honest, I'm really not sure there are quick solutions...other than continuing to point out that seeing children as people means being equally critical of both characterizations: the angel-child as well as the demon-child. In my world, there are no "good children" or "bad children"...just "children."

And, too, I think it's really, really important to emphasize that the goal is to find a way of sharing our public spaces in a way that enables everyone, as much as possible, to enjoy them, utilize them, move through them -- whatever our individual goals are. This is not about taking space away; it should not be about denigrating one set of peoples' needs in order to elevate another set of people to a position of privilege. The goal is to create a world in which all of us have less occasion to scrabble, feel desperate, freak out, or live in anticipation of being found socially "inappropriate" by another human being.

For my own previous posts on this topic, see:

*Again: this is not only (or even primarily) about individuals behaving intolerantly toward young people in public, this is about how we as a society talk about children's presence in public spaces -- and how that talk informs how we, as individuals, respond to actual sightings of said children in said public spaces.

posted by annajcook at 8:44 AM