in which I write letters: dear alma mater


Today, the Board of Trustees at my alma mater (Hope College) convenes for its spring meeting. On the agenda is the Insitutional Statement on Homosexuality (PDF), written by the college president in 1995 and formally adopted by the board in 2001. The statement basically affirms the position of the Reformed Church in America which condemns homosexual "acts" while "affirming the responsibility of Christians to be fair to and accepting of persons with a homosexual orientation" (yeah, don't ask; I'm not sure how they expect anyone to actually carry this off).

Anyway, the Hope LGBT Alumni Association called on folks to write the Board a personal letter opposing the statement and calling for its repeal. And because I enjoy writing letters and welcome any opportunity to get up on my soapbox and declaim on issues near and dear to my heart, I jumped at the chance.

And because it's a shame to share self-righteousness with only the Board of Trustees when you can spread it around the internet, I'm posting it here. I'll let y'all know what happens in the weeks to come! 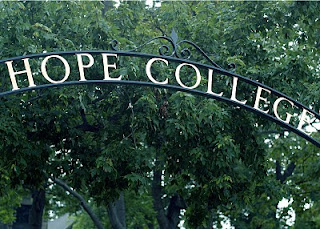 To the Board of Trustees:

Since I am also a feminist and in a committed relationship with another woman, the college’s Institutional Statement on Homosexuality is not one of them.

As I know that the Board of Trustees plans to review the Institutional Statement on Homosexuality at its May meeting, I would like to take this opportunity to share with you some of my experiences at Hope College as a non-heterosexual student and as someone who believes non-straight sexuality is completely compatible ethical sexual practice.

I started taking classes in the fall of 1998 as a seventeen year old, eager to explore the brave new world of higher learning, creative writing, and political engagement. In the fall of 1998 Hope College hosted a Critical Issues Symposium on “Feminism and Faith” that was, for me, an initiation into a world of scholarship that spoke directly to my values: I was introduced to a community of scholars and theologians who believed deeply in equality, justice, and the glorious chaos of human existence. In the wake of the Symposium, throughout the 1998-1999 academic year, various speakers came to campus to talk about human sexuality. During that time I witnessed first-hand a great deal of hostility, both among students and on an institutional level, to those values of equality and justice and to the acceptance of human diversity.

I thought seriously after that first year about leaving Hope and transferring to a more welcoming campus. To be honest, despite generous tuition benefits, I would probably not have stayed if it had not been for the Women’s Studies faculty who gave me the space to explore the world of human sexuality and human rights without limiting the possibility of sexual morality to heterosexual relationships. I will be forever grateful for that space in which the faculty at Hope encouraged me to develop my scholarship and articulate my values. Yet it was always clear to me that those values were not in line with the beliefs held by those who formulated institutional policy. The stories I hear from family and friends still involved on campus indicate to me that this situation has not materially changed.

As the Board revisits its support of the Institutional Statement on Homosexuality, I urge you to consider the possibility that a same-sex sexual relationship offers us manifold opportunities to bring joy, love, and well-being into the world – as does any sexual relationship between two enthusiastically consenting individuals. I would encourage you to imagine that Hope College’s role as an institution of higher learning, in the context of the Christian faith, could be to encourage its students to explore their sexual values and ethical sexual practices regardless of the gender of those individuals engaged in any particular sexual activity. This, it seems to me, would be a much more life-affirming than to sit in judgment, suggesting that non-straight people who act on their sexual desires, regardless of ethical practices, are unchristian and therefore marginal members of the Hope College community.

I cannot hope that by writing this letter I will be able to persuade any of you, single-handedly, that non-straight sexual intimacy is no more or less sinful than heterosexual sex. Nor can I claim to understand the myriad pressures that are brought to bear on the Board of Trustees by certain stakeholders to reaffirm the condemnation of a certain proportion of its student, faculty, staff, and alumni population (not to mention their families and friends) for the nature of their love relationships and sexual practices.

Speaking for myself, however, I would like to make it clear to the Board that unless the atmosphere at Hope regarding human sexuality demonstrably improves, I will not support the college as an institution, financially or otherwise. I was clear about that upon graduation, and I am even clearer about that now. I will not support an institution that does not recognize the legitimacy of my primary relationship and continues to create a hostile environment for faculty, staff, and students who are not straight or do not believe that non-straight sexuality is immoral. This makes me sad, since some of the most dedicated faculty and highest-quality teaching I have ever encountered have been at Hope College. However, in the end I am unwilling to support the institutional marginalization of some in the Hope community just for whom they have fallen in love, or share sexual intimacy, with.

To tell any person that being sexual and making positive, fully consensual, sexually intimate connections with another human being is destructive to their spiritual well-being is, in my opinion, an act of violence. To codify such a belief as an institutional statement makes it even more destructive, as it is amplified by the position of authority a college administration holds over its students and employees. I believe such an act of violence runs counter to the Christian message of increasing joy, love, and wholeness in the world.

Ultimately, you may well choose to uphold the current institutional policy. However, it is my hope that before you do, you reckon with the pain and alienation you have caused (and will continue to cause) some within the Hope College community by doing so.

Respectfully submitted for your consideration,

posted by annajcook at 8:09 AM