are we talking "acting" or "passing"? (and why it matters) 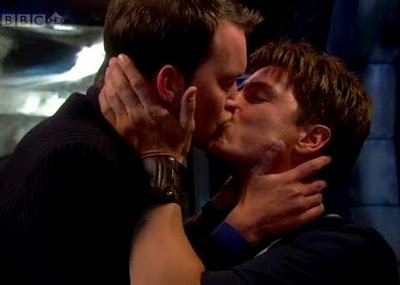 A lot has been written in the last week or so criticizing an opinion piece by Ramin Setoodeh published in Newsweek in which he appeared to claim that gay actors are unsuccessful at playing straight (see Jos @ Feministing for more details).

Yesterday, upset that "the internet" is dumping hate on him, Setoodeh published a response to these responses, claiming that the critiques of his original article are off base

But what all this scrutiny seemed to miss was my essay's point: if an actor of the stature of George Clooney came out of the closet today, would we still accept him as a heterosexual leading man? It's hard to say, because no actor like that exists. I meant to open a debate -- why is that? And what does it say about our notions about sexuality? For all the talk about progress in the gay community in Hollywood, has enough really changed? The answer seems obvious to me: no, it has not.

Here's the thing. The way Setoodeh frames the question the second time around, he makes it clear that the question is about how society at large responds to knowledge of a queer actor's sexual orientation. If a successful actor, known for playing straight romantic leads, suddenly came out as gay (that is, in real life not interested romantically in women), how would the hitherto rapt audience respond?

Setoodeh claims they wouldn't respond well. And if that was truly the gist of his argument, I'd be totally on board: we do, as a culture, respond uncomfortably to people playing characters whose sexual orientations don't match their own. How much, and how consistently, we respond negatively to gay actors playing straight is another question. As others have already pointed out, he cherry-picks his examples and shoehorns them into the argument he wishes to make. He also blithely skims over the question of straight actors playing gay characters, suggesting they don't catch flack for accepting such roles. While it's possible that actors who are straight have more room to maneuver, I'd question whether someone James Franco (who played Sean Penn's lover in Milk) never faced questions about his own sexuality. He was definitely questioned closely by Terry Gross about how he was able to play a character whose sexual orientation did not match his own. People speculate, and given the homophobia in our culture, those speculations are often mean-spirited.

The bigger problem, though, is that that wasn't his original argument (or at least not all of it). Setoodeh's original essay targeted actor Sean Hayes in his stage performance as a straight male lead in Promises, Promises, arguing that Hayes was unconvincing as a straight character because, according to Setoodeh, he's just so flamingly gay.

But frankly, it's weird seeing Hayes play straight. He comes off as wooden and insincere, like he's trying to hide something, which of course he is. Even the play's most hilarious scene, when Chuck tries to pick up a drunk woman at a bar, devolves into unintentional camp. Is it funny because of all the '60s-era one-liners, or because the woman is so drunk (and clueless) that she agrees to go home with a guy we all know is gay?

What strikes me about the difference between these two arguments is where the burden of responsibility is placed. In the first piece (above), Setoodeh is critiquing Hayes for failing as an actor to play straight, suggesting that in order to play a character Hayes has to "hide something" (his sexual orientation), as if this is somehow categorically different from the task that faces all actors: to embody a character on stage whom they, as human beings, are not in real life.

I understand this impulse to a certain extent. We generally place the burden of embodying a role on actors, stage and screen. After all, that's their job: to play a part. We go to the theater expecting the cast and crew to create an atmosphere in which we can suspend our disbelief -- in which we can put aside our knowledge that these are human beings on a stage telling us a story -- and experience that story through a collaborative leap of the imagination.

But the suggestion that Setoodeh is uncomfortable with Hayes performance because he feels he's being lied to is where this actors-bearing-responsibility things breaks down for me.

If our knowledge of an actor's personal life (say, their sexual orientation) changes the way we -- as audience members -- interpret their performance, doesn't that shift the burden of responsibility back to us? If the onscreen chemistry between George Clooney (to use Setoodeh's example) and his leading ladies changes in our minds once we imagine he's gay (incidentally: why is bisexuality never a part of these conversations? hello??) then the problem is not with the actor (whom, until we believed he was not-straight seemed to have all the chemistry in the world) but in our heads.

I'd suggest, here, that Setoodeh might learn something from the discussion within the trans community about the problematic framework of "passing," which places the burden of performing gender identity and/or sexual orientation on the individual rather than on the audience (society) which interprets appearance and behavior according to all kinds of social cues that are completely outside the control of the individual. See, for example, Bear Bergman's essay "Passing The Word" in The Nearest Exit May Be Behind You.

When we continue [in the trans community] to use the word pass, we continue to hamper ourselves by endlessly repeating a narrative of deception, not to mention the legacy of racism, the cultural arrogance, and the spectacular level of objectification it brings with it....I would rather move the burden back where it belongs, to the observer, the person whose cultural lens and personal locations on so many aces are in so many ways the day-to-day deciders of how a person is read....passing is fleeting, tricksy, temporary. But what it takes or means to read depends, rightly and righteously, entirely on who's doing it (112).


I'm sure there are "bad" actors out there -- actors who, regardless of sexual orientation, struggle to set aside themselves in order to embody a character who is not them. I'm a terrible dissembler: it's one of the reasons I write nonfiction instead of fiction and gave up my childhood dream to be in musical theatre. I realized I had no interest in being anyone other than myself, and in fact felt profoundly uncomfortable whenever I tried to slip out of my skin and into someone else's. But Setoodeh isn't dismissing Hayes because he thinks the guy is a bad actor. In his initial piece, he is quite clearly suggesting Hayes isn't successful because he's gay.

This, for me, is where his where his credibility as a cultural critic breaks down. Want to critique an actor you think is doing a shitty job? Sure: your prerogative as a consumer of theatrical performances. Want to speculate on how our cultural narratives about human sexuality impede our ability to suspend disbelief about actors playing characters whose sexuality differs from theirs? I'm with you all the way. Suggest that actors (particularly non-straight actors) are incapable of playing characters with an orientation not their own? So...what: hetero actors can only play hetero parts, gay and lesbian actors can only play queers, and those of us who are bi are really (taking this argument to its logical conclusion) the only people capable of auditioning for any role going?

I just can't buy it. It's a huge fucking red light that suggests to me the issue is not the actor's abilities, but rather with the audience member who is unable to let go of their discomfort at seeing someone not-straight play someone who is. Which, as Setoodeh points out in his second piece, has everything to do with "our notions about sexuality," our way of reading the actor we know to be gay, rather than with that person's skill as an actor to embody the character they have chosen to play on the stage.

posted by annajcook at 8:20 AM