to be subjective and scholarly 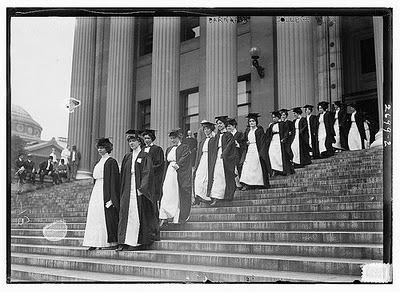 Last Friday, I blogged about my frustration with finding balance between my academic research and writing, my wage-work, and my domestic life and loves. This Friday, I thought I would pick up where I left off, after a fashion, and write about the ways I try to balance the academic and the personal within my work as a scholar.

This post has gone through a number of different iterations in my head, but is taking this particular form because of a recent post by Kimberley @ 72-27 who this week wrote a long, reflective piece about her own return to academia and the limitations she sees in rigorous scholarship that neglects the relational in pursuit of the rational.

Before my current program, I came from a small school in Seattle that trained students to be therapists, and thus it placed primary value on inter-personal and intra-personal knowledge. My professors were psychoanalysts and therapists, and they asked their students to delve into the unconscious self and figure out what was there and why it was there. We did intense work understanding our own families of origin and personal narratives, and we received a great deal of feedback on how other people experienced us while in relationship with us. While the program lacked academic rigor in the traditional sense, it demanded a kind of inter-personal and intra-personal rigor that was invaluable.

While I love the rigor that is applied to critical thinking at Yale, I am left envisioning what Yale would be like if that same kind of rigor were applied to self- and inter-personal knowledge. For instance, in my U.S. religious history class, one of my professors shared with us that it took him quite a while in his career to realize that he hadn’t picked his research “objectively.” His research came out of deeply rooted questions based on very personal life experience. Yet, in his graduate training, he had not been encouraged to see the connections between his “objective” research and his own life story. This discussion in class came at the very end of the semester, and it was a relief to me. I had often felt as if historians maintained a pretense of objectivity. It was nice to finally hear that we can actually do better research if we are self-reflective in the process. Knowing ourselves better will also translate to being better collaborators.

How does this connect to my own work, beyond the skepticism toward an overly-depersonalized academia which I unabashedly share? To begin answering that question, I want to share another lengthy quotation -- this time from an email I wrote earlier this spring. When I was at the Oregon Extension in March, doing research for my thesis Doug Frank -- one of the faculty there, an historian and mentor of mine -- asked me whether my project was a chronicling of "what happened" or whether I was making a specific argument. I stumbled through an immediate response that, from what I remember, emphasized that I was gathering the oral histories as a type of chronicling, but that my thesis would itself have a specific argument to make about the place of the Oregon Extension in American cultural, educational, and religious histories.

Of course me being me, I left the conversation unsatisfied with my response and the following day wrote Doug a long email trying to explain my motivations for this research. I won't reproduce the email in full here, but I wanted to share two paragraphs that speak to the connections between my "objective" historical analysis of the Oregon Extension and my own life story.

On a more personal note, I will say that this project comes out of my own deep interest in history of non-mainstream education and my very personal quest to find a way to bring together my love of learning (the life of the mind) in some sort of structured environment with the quality of life I experienced as a child and young adult outside of institutional schooling. My original desire to attend the OE as a student (nearly a decade ago now!) was driven, in large part, by my desire to find a way to be a scholar without having to fit myself into the vision of education (the fear-based model you were talking about yesterday, which I believe is still deeply embedded in most schools) and of human nature that ran so counter to the understanding of human life that I had grown up with in my family (and elaborated on through my reading in theology, feminism, and educational theory). I am drawn to examples of intentional community and purposeful work life, in which folks have been able to step outside of the pressures of the mainstream and forge a life for themselves that isn't grounded in being "anti" (that still retains some sort of relationship with the dominant culture) but nevertheless has some autonomy when it comes to priorities and values -- the power to say "you have no power here" to things within the dominant culture which are inimical to human well-being.

When I went back to graduate school, I was taken aback by how much my soul rebelled against being back in an environment of institutional education, surrounded by folks who largely take those traditional frameworks for granted (at the very least) and often champion them (Boston's educational culture is incredibly status-conscious). I don't necessarily believe I made the wrong choice to return to school (the factors are myriad), but I do know that when it came time to choose a thesis topic, I intuitively knew I needed to spend my time with a topic that would help me retain critical distance on that culture, that vision of humanity, that understanding of the way human beings learn and what they need to thrive. And as of this writing, at least, I feel pretty proud of the way that this project has helped me to do just that, giving me a certain inner sense of distance from the expectations and values of the institutions within which I work as a student scholar, so that I am sharing these ideas with them (in a form they can accept for credit) but not writing my thesis for them.

As I wrote more concisely (though much more pedantically) in an early draft of my thesis introduction, "The scholarly task of historicizing the college classroom and the expectations of higher education were, in part, a method of coping with the alienation I often felt as a student whose experiences and vision of, not to mention goals for, learning were at odds with the majority of the people whom I encountered at school."

In other words, this topic matters to me, in a visceral, immediate way. The project of make sense of the history of competing educational theories and practices is as much about finding a place for myself within that world as it is about situating the Oregon Extension within its unique historical context. I am invested in doing my part to enter these folks into the historical record because I believe deeply in the value of what they do. It is important to me that their own unique experiment in living be acknowledged at some level as part of the history of education in the twentieth century -- a way of being that runs counter to the stories we tell ourselves about how life has to, or ought to, be.

And the world of academia is definitely divided as to whether this is or is not a good thing. Emotional proximity to one's subject-matter is often viewed with deep suspicion, as it is seen to cloud the mind, bias the historian whose job (as Kimberley notes about) is ostensibly to be "objective" about her subject. Distance from one's topic (in time as well as emotion) is supposed to provide you with the dispassionate objectivity to analyze and critique with greater clarity. Even if we recognize (as most scholars do today) that we are all inevitably subjective in our scholarship, the push has been to recognize and attempt to minimize or compensate for those biases, rather than to embrace and work with them as strengths.

I'm less certain that this is the only or the best approach to subjectivity within scholarship. Although I'm still searching for language to articulate it, I think that there are different qualities of emotional proximity or connectedness to one's research subject that can -- depending on how self-aware the researcher is and what their relationship to that connectedness is -- help or hinder scholarly analysis.

I am taking a meditation class with Hanna this month (my first ever!) and have been introduced to the practice of metta meditation, in which the quality of loving-kindness toward beings is distinguished from feelings of acquisitive desire for those beings. I've been thinking this week about how the same distinction might be made concerning one's affinity toward a research project: intense feelings of loving-kindness toward the subject and subjects -- relatedness that is not conditional upon a particular outcome -- could be separated from an emotional investment that was conditional, that required fidelity to a particular outcome, a particular historical narrative that fit pre-conceptions about what story these historical sources were going to tell.

Again, I'm not sure how practically this translates into a real-world relationship between the scholar and her sources, the scholar and her passionate involvement with the work of her subjects. But it is a beginning, a way to open (inside myself, at least) a conversation that values not only my intellectual work but also the personal, emotional, life-story reasons why the pursuit of this particular story is not only an academic exercise but also very much a matter of existential survival.

image credit: Barnard College, 1913 (LOC) made available by the Library of Congress @ Flickr.com.