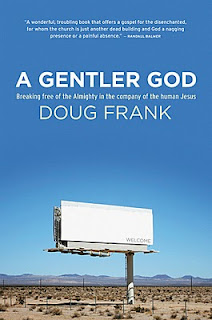 This is a rambling sort of post reflecting on Doug Frank's recently-released A Gentler God: Breaking Free of the Almighty in the Company of a Human Jesus. Doug is one of the founding faculty members at the Oregon Extension, the community I am researching and writing about for my thesis. I might write a proper book review / booknote about A Gentler God at some point, but for now I want to share a story from my own history of interactions with the church -- and Evangelicals particularly -- that reading this book reminded me of, and helped me understand in a new light.

Despite growing up in culturally and religiously conservative Western Michigan, I was largely what they call "unchurched" as a child. My paternal grandfather was an ordained minister and professor of New Testament theology at Western Theological Seminary which is affiliated with the Reformed Church in America, a small but mainline protestant denomination. My father was, therefore, a preacher's kid; my mother -- raised by a lapsed Scotch Presbyterian and a Christian Scientist -- was sent to Congregational Sunday school as a child and attended confirmation classes but never joined. My parents didn't have us baptized and pretty much stopped attending church around the time my little brother was born (I was three) because the amount of nurturing they got out of church on Sunday wasn't worth trying to parent small beings in a child-unfriendly space.

We didn't return to Hope Church (my father's childhood RCA congregation) until I was a teenager. We had a few reasons for doing so, including the fact that several of my more conservative, evangelistic friends had attempted to convert me (them: "have you accepted Jesus into your heart?" me: "uh ... no.") and my mother was hoping to inoculate us against fundamentalist, evangelistic theology by giving us a chance to learn the language and messages of Christianity and a scholarly, fairly liberal environment. To give you an idea of what this meant: the congregation had recently gone against denominational practice by ordaining a gay member as a church elder, they had already had a series of women ministers, they had an active pacifist group, and my feminist theology professor at college was a member.

I offer all of this as a preface to the story-story I'm going to tell you, which is about the husband and wife who served as youth group leaders for several years while I was attending Hope Church. This couple were way more theologically fundamentalist-evangelical and socially conservative than the majority of the congregation, and I'm not exactly sure how they landed the position of youth leaders (likely because they volunteered). I did childcare for the family regularly, but used to find myself at loggerheads with them (also regularly) about a number of issues including parenting, feminism, human sexuality, and theology.

That's what you're thinking, right? There are just so many things wrong with this story that it sort of stops you dead in your tracks.

This is the story that this couple -- with three small children of their own, remember -- told with passion and the clear expectation that we would be humbled by the boundless, sacrificial love of God. Whereas, of course, what character in this story is any human being (let alone a child!) going to identify with? The toddler! Whose own parent kills them in order to save a train full of unnamed, faceless persons. What child could possibly fail to be traumatized by a story that tells them the moral "right" is one in which their parent would not save them from death when they had the power to do so?

The take-away message regarding God and Jesus in this story is that God is a violent, murderous parent who has no overriding, irrational love for His own child. It's a story of divine child abuse. And to me it was absolute crazy-talk.

Well, according to Doug, who describes this very story -- or at least the collection of ideas embodied in this story -- in the first part of A Gentler God, this is the "defining story" of modern American evangelism. Evangelical Christians, Doug argues, grow up in such close proximity to this story that they have trouble seeing its internal contradictions: the way in which a story that is trotted out to signify God's boundless love for humanity actually tells a story about extremely conditional love and bloodlust. God demands bloodshed, which is why Jesus is required by God to die for our sins. How can we possibly square this with a God who cares for all of God's creation unconditionally?

Well, you can't, which is why Evangelicals (again, according to Doug and other scholars I've read) live on some level in perpetual fear of the wrath of an Almighty deity who -- but for His willingness to murder his own son -- would surely have come after you in vengance.

The story I heard in youth group displaces the personal wrath of God in favor of a fatalistic, mechanical failure -- God isn't causing the train to crash -- God simply has to decide between God's own child and the rest of humanity. But it still does no better at describing a loving, compassionate God -- in fact, in my personal opinion it actually reifies the wrongness of the defining narrative by turning Jesus (a full-grown adult who, the Bible if pretty clear, makes the decision to die as a consequence of his actions) into a child who in no way chooses his own death. Instead, this story takes God and shapes Him (definitely "Him"!) into a monstrous parent. This is, I'd argue, even a step beyond the traditional Evangelical God of atonement whose divine sense of justice impersonally demands blood. This isn't a God overly obsessed with justice at the expense of compassion -- but a God who is simply uncaring, sociopathic even.

It appalls me, even all these years later, that this was the narrative of Christianity meant to excite conversion.

A Gentler God gave me a new perspective on the way this story, and its sister-stories in the Evangelical theological landscape, shapes how conservative Christians view their God -- and how that view of the divine shapes their interaction with the world around them.