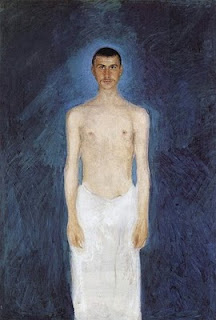 Sam Leith @ The Guardian (h/t to Hanna) | EM Forster's work tailed off once he finally had sex. Better that than a life of despair. "Nobody should have to write, or paint, or sing from the depths of despair, no matter how exhilarating the results. I'm sorry we never got to read Forster's unwritten novels, but I'm much happier he got laid."

Amanda Marcotte @ Pandagon | New Bulletin: Men Have Hearts That Break. "Both sexes are, gasp, human beings and therefore are sad when they lose a relationship. The reason that men have trouble bouncing back is that our culture doesn’t create enough room for men to heal. Men are discouraged from having close friendships where they can talk this stuff out (at least when they’re younger), and they’re encouraged to put on a stoic face and bury pain deep inside. It’s no surprise to many of us here, I’m sure, that a little crying it out can aid recovery. That men aren’t given that space is just another example of how Patriarchy Hurts Men Too (PHMT)."

Miriam @ Feministing | Is female dominance a success for feminism? "Women's success at the expense of men is not a feminist success. Flipping the scales in the other direction is just as problematic. So what's the solution? I don't think it's the tactics that Rosin reports on in her article: quiet affirmative action toward men trying to get into higher education, re-segregation of education to cater towards boys learning needs. If we keep up these tactics, we're going to create a seesaw effect where women outpace men, and then men outpace women. We need a new strategy. A less gendered one."

Stephanie Zvan @ Quiche Moraine (via Sex in the Public Square) | What Is an Ally? "I’m not really sure how it happened. Allies in the culture wars aren’t appreciably different than military or political allies, but somehow, the meaning of the word has changed online. We’ve gone from 'In everyday English usage, allies are people, groups, or nations that have joined together in an association for mutual benefit or to achieve some common purpose, whether or not explicit agreement has been worked out between them' to the assumption that the act of alliance comes with specific obligations and that people are 'bad allies' or not allies at all if particular things are done or left undone."

Greta Christina @ The Blowfish Blog | How Often Should You Ask For Something? and How Often Should You Ask For Something? Part Two: The Specifics. "How do we value the right to say 'No' to any kind of sex we don’t want to engage in — while still valuing the right to ask for what we want? How — specifically, practically — can we make this distinction?" and "Example. If my partner asks me, 'Can I apply hot peppers to your nether regions?” and I say 'No, I don’t want to try that,' it’s probably not going to occur to me to bring it up again. Not because I’m traumatized by the very idea . . . but because it simply won’t be on my radar. Even if hot peppers aren’t an absolutely firm No for me — even if they’re something I’d be willing to try if my fears and reservations about it were allayed — once I’ve said 'No,' for me the matter is going to be pretty much closed. But that doesn’t make my partner a bad person for opening it up again."

Cara @ The Curvature | Group Suggests Age Appropriate Sex Education? Time to Freak Out. "Sex education, in my view, shouldn’t be about 'preventing teen pregnancy.' It should be about teaching young people how to engage in emotionally and physically healthy, pleasurable, consensual sexual relationships if and when they choose to engage in such relationships at all, and informing them about how to keep themselves as healthy and safe as they can and how to control their reproductive capacities as they see fit as a part of that."

Rachel @ The Feminist Agenda | Obesity and fun sexy time. "The thing we should be paying attention to is the fact that many fat women are so beat down psychologically and have so thoroughly internalized the message that they are not sexual beings, that they don't deserve love and sexual fulfillment, and that their bodies are worthless and disgusting, that they often put their sexual health at risk. That is fucked. You know what else is fucked? The fact that many fat people have had such negative experiences with medical professionals that they would rather risk their sexual health than interact with them."

Vanessa @ Feministing | The sanctioning of child genital cutting at Cornell University. "Alice Dreger and Ellen K. Feder at Bioethics Forum brought recent attention to the controversial (to put it mildly) treatment which Dr. Poppas claims to 'fix' the genitals of children as young as 3 months so they can have a more 'normal appearing vagina' after the doctor deem their clitoris oversized." Original post flagged with a strong trigger warning.

And I have to break away from my format-of-the-week here for a little editorializing, because Vanessa shares this appalling quote from the F-Word

One time I asked a surgeon who does these surgeries if he had any idea how women actually reach orgasm. What did he actually know, scientifically, about the functional physiology of the adult clitoris? He looked at me blankly, and then said, "But we're working on children." As if they were never going to grow up.

I just want to point out that, not only do children grow up -- they actually experience pleasure from their genitalia as children. The fact that the doctors are only secondarily (if that) concerned with the functionality of the clitoris yet primarily concerned with the clit "looking right" (which is a highly subjective observation, given the diversity of human genitalia) tells me just how much they've dehumanized these young people -- in part, I would argue, because their age makes them supremely vulnerable to exploitation in the name of increasing medical knowledge and "protecting" them from the (apparently irreparable) damage of being deemed abnormal according to our straightjacket codes of gender conformity.

And finally (because I am, after all, a librarian), Danika @ The Lesbrary | Lesbian Canon? "For the last couple days I’ve been thinking about the concept of a lesbian canon. I mean, I know that canons in general are problematic, but I like the idea of trying to identify the books that really steered lesbian writing."

posted by annajcook at 2:02 PM