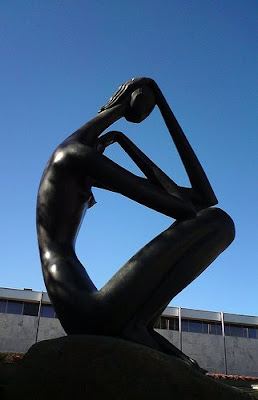 I've recently been making some decisions about how and when to complete my graduate education. Decisions which have left me feeling one part proud of myself for saying "nope, this isn't working" and making the necessary changes and one part small and ashamed of being slow and for, well, wanting a balanced life. It is always humiliating (or at least I find it so) to find one's self buying in, even a little bit, to the cultural pressures and voices in one's head that pass judgment on the personal life decisions. Decisions that I know, in my gut, are right for me but nevertheless run counter to the mainstream expectations of how we ought to live our lives.

And yet, despite knowing I'm right, I do feel that pressure, and I do hear those voices. As I was trying to make a decision about whether or not to revise my planned thesis-writing deadlines to give myself more time for writing I was acutely aware of those dynamics. And the dynamics of justifying whatever decision I made both to myself and to others (my advisers, my family and colleagues, etc.). So I have a few observations that I'd like to share with you.

As I sit here spelling them out, they all seem rather obvious -- but I think in part because of their very ubiquity they become invisible to us. So for that reason I'm going to the trouble of articulating them anyway.

The first observation is that it is really damn hard in our culture to feel comfortable making the argument that I am part of a family and that it is important for me to nurture the relationships that make up that family even while pursuing academic work and wage-work that I also care about. When justifying my thesis extension to my advisers, I emphasized my work schedule and the importance of having enough time for deliberation and revision while writing. I was up-front about the importance to me of having regular leisure time with Hanna during the week, but I was careful to name that desire as one of a number of factors, rather than foregrounding it as one of my primary concerns (which, in fact, it is). And part of me felt ashamed for naming it as a primary concern, even as I persisted in doing so.

A related reason that feels like an admission of failure is naming domestic responsibilities and the amount of time they take: quotidian tasks such as the morning and evening commute, physical exercise, dish-washing, laundry, grocery shopping, cooking, cleaning one's kitchen and bathroom, attempting to impose some order on a very tiny apartment space in which two grown women, a cacophony of plants and myriad books are attempting to co-exist. As feminists have pointed out repeatedly for the past two hundred years (at least), domestic concerns are not taken care of by magic (sha-zing!), but rather through work, work that takes both time and energy on the part those whose duty it is to complete these tasks -- whether those persons are paid domestic servants, unpaid spouses, or (in the case of those with neither the economic resources to outsource or a "separate spheres" arrangement with their partner) someone who comes home from work to a second shift.

Yet, as feminists have also pointed out, our society is still organized on the underlying assumption that these tasks will be completed on an invisible level, but people whose labor doesn't officially count -- or possibly in some gap in the space/time continuum. So it feels shameful to acknowledge openly that these tasks do take time, my time and Hanna's time, and that these domestic responsibilities do not count as leisure activities. Rather, they too are un-fun duties that detract from rest and relaxation during the week.

Both of these facets of life -- time to enjoy relationships and time for domestic tasks -- fall under the broader umbrella of self-care, which is really the third life activity that is so very difficult to talk about, much less claim time for, in our culture (more about that in a forthcoming post next week). Despite all of the hue and cry that we are a narcissistic, self-obsessed culture very little in the structure of our society encourages care for, and love of, the self -- something that is foundational to being effective in any other aspect of life. Yet it is something that is supposed to happen around the edges of our other obligations -- shoved to the early mornings, late evenings, weekends, holidays. Rather than occupying its central place in the fabric of our daily lives.

My advisers were, I would like to be clear, not pressuring me to finish within the original time-frame, and were even supportive of my desire to have a life outside of school. But nonetheless, it was a difficult thing for me to ask for. One of them expressed confidence that I could finish writing in the time originally planned, and suggested that deadlines are important in curbing perfectionist tendencies. Which made the voices in my head start to wonder: was I really just panicking about writing a less-than-"perfect" thesis? Was requesting an extension just delaying the inevitable needlessly? But then I realized that these questions and doubts I was having focused the question back on the thesis itself, once again eliding the life I lead around the thesis project, and how that "extra-curricular" world has a place of equal importance in my life.

To be honest, when push comes to shove, it has a more important place in my life. By which I mean that caring for personal relationships and spending quality time with the people in my life will virtually always academic endeavors, unequivocally.

And that's what I have the hardest time admitting to myself and the world: that people will always, always come before ideas in terms of my priorities. Why is admitting this so difficult?

In part, at least, it's because I do, truly, feel passionate about ideas. As anyone who has lived in close proximity with me since I became verbal can attest: I am constantly thinking, processing, analyzing the world around me. It's something I find endlessly enjoyable, satisfying, meaningful. My thesis, in this particular instance, is a self-chosen research project on a topic that's been close to my heart for the past fifteen years; it has re-connected me to people for whom I care deeply, and whose own work in the world I admire. I will see this project through to the end, and I will be proud of having contributed my bit to the history of this particular time and place. I am good at what I do, and I believe in making use of my skills as a writer and thinker.

But as much as I love the world of ideas, I do not thrive in the world of academia, and I don't think I quite understand -- at least intuitively -- what it takes to be the type of person for whom scholarship is their passion, their lifeblood. And often I feel incredibly guilty about acknowledging this, since I live and work in a world surrounded by such scholars.

It makes me feel, in some obscure hard-to-put-my-finger-on sense, like I'm letting them down. That I'm failing to live up to their hopeful expectations that I become a driven, passionate scholar like them.

Finally, I also think that, as a woman and a feminist, I find it particularly fraught to speak about those instances in which I choose to prioritize personal relationships over what amounts to my professional identity. Part of me struggles with the realization that, in doing so, I am conforming to cultural expectations of what women "naturally" prefer: we're "naturally" more intuitive and relational, blah blah blah ("rubbish!" as Hanna would say). Another part of me is pissed that I feel ashamed of making those choices because I realize that, on some level, my feeling of shame means I have bought into the (profoundly anti-feminist) cultural idea that those "feminine" realms of being are somehow a lesser choice. And yet a third part of me is haunted by the women academics who have worked so hard to assert their right to be a part of the life of the mind, and I feel saddened by my acknowledgment that I have (more often than not) failed to feel at home in the space they were so triumphant, not so very long ago, to gain entrance to.

In the end, though, I don't think this is an issue of gender (though it has aspects specific to cultural expectations of women and men) so much as it is an issue of "work" and how we understand what counts as work and what the place of work should be in our society and in our individual lives and self-identities. If anything, I suspect men still have a more difficult time in our culture claiming time for non-work activities, particularly activities that involve relational intimacy and home-making.

Most of all, I think this is an issue of re-claiming the right to make space for things that are not-work in our lives, and make the (radical?) assertion that often these things are more important to us than those things which count as work.

This has been a long, rambling blog post for which I have no tidy concluding remarks. So I thought I would end with some open-ended questions. I hope some of you will take the time to respond to in comments! What things do you find yourself struggling to justify making time for, and why? What do you do when your personal priorities are at odds with society's priorities?