espresso AND a puppy: the consequences of free-range children?


Via my friend Laura comes this warning from a coffee shop in L.A., posted online at The Consumerist. 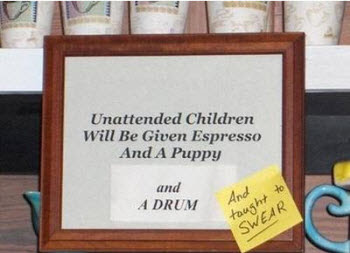 I'm going to admit up front I find this funny. I think it's a fairly light-hearted way to ask parents to be aware of their children in public, crowded spaces. And remind them not to assume that baristas and/or store clerks and/or other customers are available for free childcare. As a person who used to work at Barnes & Noble, I've experienced first-hand the frustration of adults who came in with the clear intention of dumping their kids in the children's area and then going to meet their friends for an extended coffee klatch at the Starbucks across the store. It's one thing to believe that "it takes a village to raise a child" (I do believe young people are our collective responsibility) and another thing to demand that "the village" suddenly add childcare to their list of work-related responsibilities.

There's a big difference between asking a barista to politely take an order for chocolate milk from a three-year-old and asking them to supervise a gaggle of small people roughousing on the coffeehouse furniture. As Laura said to me in a follow-up email,

Whenever people ask me to take care of their children, I try to make it clear that they may not like the results. After thinking through this child-hate controversy for a long time (via your blog and elsewhere), I have come up with [the point that] us haters don't actually hate children, we hate the parents. The parents who don't respect their children or other people enough to to teach/guide/discipline their children within responsible boundaries. My own personal experience with this is primarily in stores and on the T [Boston subway], both places where it can be dangerous not to monitor children. Plus, I think most everyone could do with a teaching moment on respect, politeness, and kindness, and I think it's a real problem that some parents think their children can't learn it, or it will be stifling to their creative spirit to learn it. I mean, children are smart, you can teach them appropriateness in different circumstances.

To go back to the episode of My Family I wrote about for mother's day, when Ben and Susan (the parents) are trying to speak with another couple about that couple's son's bullying behavior toward Ben and Susan's youngest child. The parents of the bully are self-proclaimed advocates of "free range" children, which in their minds equates to being completely hands-off and allowing their child to run rough-shod over other young people. I have first-hand experience with this kind of parenting philosophy, which basically assumes that children should work out problems among themselves. What I find suspicious about this philosophy is that a) the parents espousing it are more often then not the parents of children who benefit from the playground hierarchy, rather than parents of victims; and b) it side-steps the question of how children are going to learn -- particularly in a culture that's so age-segregated as ours, where children spend the majority of their time with their age-mates -- the skills to mediate and problem-solve. These are skills even adults with years of practice struggle with, and yet we assume children will magically acquire them?

I sense a disconnect.

Which is why I come back to observation "a": radically hands-off parents* are more often than not bullies themselves, advantage-takers who are more than willing to step over others more vulnerable then themselves (whether it's a polite stranger they cut in front of in the coffee line, or a colleague at work they systematically undermine, or a spouse whom they bully Hyacinthe style). They believe the world is a cut-throat, take-no-prisoners place in which their children will need to learn how to come out on top if they are to survive.

I realize I've wandered far away from "espresso and a puppy" here. I think what's fascinating to me about the question of attended/unattended children in public spaces (and the related question of what type of "attending" said children require) is that rarely do we stop to assess what the stakeholders in the situation really need and how we might best arrange our public spaces in order to accommodate those needs. And I use the rather social-sciencey term "stakeholder" here as an umbrella term that encompasses all people involved: coffee shop employees, customers with children, customers without children, customers who are children ... how often do we stop and ask, when there is a perception of a problem (i.e. unattended children) what the actual problem is, and how it might be fixed. It's a possibility that rowdy, neglected children are symptomatic of something deeper, and that requiring children to be "attended" won't necessarily fix that issue -- which will manifest in some other way down the road.

Still, points to the sign-creators for naming the symptom at least -- if not the cure. And doing it in a fairly benign fashion at that, with a clear sense of humor. I particularly appreciate that the consequences of the percieved problem, in this case, are couched in terms of consequences for the parents (your kid's gonna learn the word "fuck"! and acquire a taste for coffee!) rather than abuse toward the children themselves, who are still learning, growing, and practicing what it means to be part of the social fabric of the world.

*Again, to be distinguished from parents who respect their children as human beings and care for them with unconditional love, something that is often also referred to as "free range parenting." That's a post for another day.

posted by annajcook at 9:59 AM