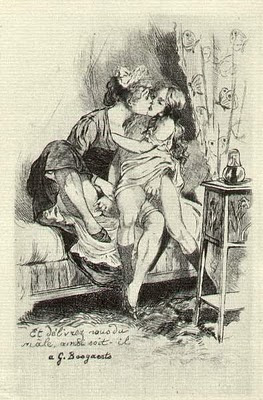 A quiet week in Lake Woebegone, folks ... maybe everyone was laid low by the heat? Or busy watching the World Cup? Anyways, here's a handful of links that jumped out from my feeds these past seven days.

First, a pretty picture (nsfw) which I was unable to use for today's illustration (damn people protecting their online content!!)

Amanda Marcotte @ Pandagon | How I Stopped Being A Slut, And Learned To Cash Massive Book Advances. "There are some obstacles to overcome. The largest is obviously my boyfriend, who is all about me getting lucrative book deals, but is concerned that the necessary thesis---that my wanton feminist ways have left me loveless and manless---could be construed as insulting to him. I’ve tossed around the idea of kicking him out and only seeing him on the sly, but the cats have raised objections to this, having grown quite fond of him after living with him for most of their lives."

Aviva Dove-Viebahn @ Ms. Magazine Blog | How to Lose Your Virginity: An Interview with Therese Shechter. "Up until a certain age, you’re not supposed to be sexually active, and then you cross some invisible threshold and suddenly everyone is supposed to be having sex ... And I have met so many people that aren’t and feel terrible. Not personally feel terrible—they’re making decisions about their lives—but feel terrible culturally. Like, God forbid anyone should find out about this."

Miriam @ Feministing | Defining queer virginity. "...But for queer folks, the boundaries are less defined. When two women have sex, when have they 'done it'? What about two men? What about two genderqueer or trans folks? Is it about penetration, or about orgasms, or nudity, or oral sex? When you expand your ideas of sexuality beyond the confines of straightness, things are more open."

Amanda Hess @ The Sexist | Talking Sex, With Kink Educators and Anti-Porn Activists. "Since co-founding KinkForAll, Maymay has encountered some complications that don’t figure into his spreadsheets—which is why, even if there’s no live action onstage, he tapes every gathering. 'I record myself because some people like to say I’m a pedophile, and since I’m not really a pedophile, it helps when they see video of me not being a pedophile,' he says. 'I’m like, "Actually, I was just showing a Google doc on the screen."'"

Molly @ first the egg | review: The Business of Being Born. "A little over 16 minutes into the film, an adorable doctor explains why doctors tend to prefer the flat-on-the-back-in-bed position and why that’s not okay. This part is just fantastic; I do wish every 'parent-to-be' would watch these two minutes."

and, for those looking for comment threads to wile away some time on ...