sunday smut: links on sex and gender (no. 6) 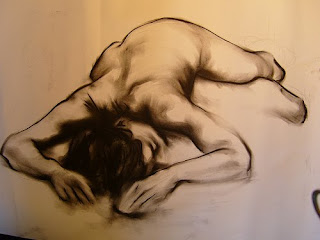 "Nation's Nipples Severely Under-Clamped, U.S. Bureau Of Masochism Reports." As so often with the The Onion, the headline says it all.

Amanda Marcotte takes on the idea of sex addiction; I usually don't agree with her in every particular, but I share her skepticism about the overuse of the concept.

CarnalNation reports on a new study by British Scientists claiming to prove the G spot doesn't exist; Amanda Marcotte again weighs in as does figleaf, and xkcd (in comic strip form, of course).

Worth special mention is Rachel Kramer Bussel's response (well worth the click-through), which mades the case for honoring the complexity of human sexuality: "I’m all for reducing anyone’s sense of inadequacy around the “right” way to have sex (including men who think they’re not superstuds because they can’t coax a woman’s G-spot out of hiding), but this is not the way to go about it. Articles which call the only evidence of the G-spot 'a woman’s imagination' do everyone a disservice."

Hanna commented in her review of Sherlock Holmes on the potential homoerotic reading of the relationship between Holmes and Watson. Apparently, this potential has disturbed the copyright holder of the Conan Doyle novels (who, in my opinion, doesn't understand much about late-nineteenth-century sexuality and homosociality). As Ben Walters writes in The Guardian,

If the film's depictions of Holmes engaging in underground boxing bouts, rescuing damsels from occult ceremonies through brute force and diving for cover from exploding warehouses are to get a pass – if, that is, it's fine for the physical prowess described by Conan Doyle to be ramped up a few notches – then why shouldn't a similar process of exaggerated extrapolation apply to the intimacy unquestionably enjoyed by the detective and his sidekick in the original stories?

Anna Clark @ RhRealityCheck reports on the efforts of universities to establish enforceable standards of etiquette for sexually-active students. As Dorothy Sayers might say, "Some consideration for others is necessary in community life!"

Another book to add to my 2011 reading list is Jesus Girls: True Tales of Growing Up Female and Evangelical, reviewed by Brittany Shoot @ Feminist Review.

Jessica @ Feministing asks "is sleep a feminist issue?" and also wonders "how do you feel about feminist 'waves'?." As an historian, I find the "wave" analogy a pretty limiting one that ends up drawing too heavily upon mainstream stereotypes of feminist activism.

I don't usually go in for advice columns, but I like Greta Christina's advice @ The Blowfish blog to a young woman who, burned by an internet relationship, believes all men are liars but wants no-strings-attached sex with them anyway.

Sociological Images offers us a sociological analysis of the color "girly blue" and earns a special place in my heart for coining the phrase "fractal gender binaries."

Amy Gates @ BlogHer writes about a Christmas "miracle" in which a laboring woman and her infant nearly die due (potentially) to a botched epidural . . . and the attending physicians are quick to cover their asses.

And finally, in the spirit of a new year, The Economist has just discovered what my U.S. Women's History professor used to call "difference feminism" -- that is, the strand of feminist thought (present in self-identified feminist philosophy and praxis since at least the 1840s) that is based on the belief that male and female human beings are innately different not just in physical parts but in their way of being in the world. So what this tells me is that The Economist has just woken up from a really, really long nap. Welcome to the 21st century guys: it's when everything changes :).

posted by annajcook at 9:07 AM