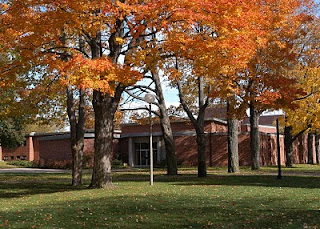 This past week, I had an exchange with one of my faculty mentors from undergrad who is currently collecting stories from queer students and allies about their experiences at Hope College (for previous posts on this topic go here). A group of faculty are hoping to collate these narratives and take them to the Board of Trustees on October 10th as part of a presentation on the hostile climate for non-straight folks at Hope College, in hopes that personal stories will help reshape the discussion around homosexuality on campus.

At first, I didn't really think I had much to say beyond what I already put into my letter to the Board of Trustees. But since writing that letter in April I've been doing a lot of thinking about Christian higher education and about the intersection of organized religion, personal faith and values, and formal learning. This is going to be a rambling sort of post, but I wanted to share some of my in-process musings. I welcome responses and further thoughts in comments!

One of the things I think we often overlook when we view institutions like Hope College or Calvin College or even Patrick Henry College from the outside is that even the most close-minded institutions can be sites where individuals learn, grow, and can even become subversive. Sometimes, that subversive impulse is born of resistence to the oppressive nature of the institution and the subculture within which that institution is situated. But I don't believe that's the whole story. Often, some parts of the institution or the subculture themselves enable that growth and change within individuals who care to take advantage of it.

To take an obvious example, young people who grow up within the Christian subculture learn at a very early age what it means to move between cultures: their own and the dominant American culture. They learn the positive aspects of being bicultural, of having a critical perspective on mainstream values and beliefs, of being an outsider who belongs to an identity community. They know how to speak what my mother used to call "God talk" and they know how to edit those references out of their vocabulary when they know such language won't help their cause. All of these skills and experiences are transferable to other sub- and counter-cultural experiences -- including the experience of belonging to feminist or queer identity groups. To many of us, feminism and a more open concept of sexuality are, in fact, extensions of the values we saw modeled within some Christian communities. I know that, when I first discovered feminist theology as a first-year college student the possibility that Christianity could be reconciled with the values I held as a feminist brought me closer to religious faith than anything before or since. I came closer that year to joining a church than I had in all my years of teenage involvement with organized religion.

The fact that the values of feminist theology were viewed with skepticism by some and outrage by others within the college community was incredibly alienating to me (as a seventeen-year-old) ... and yet at the same time, it was Hope College that had, however imperfectly, exposed me to those ideas in the first place. I was instinctively feminist before going to college -- in my auto-didactic way I knew my feminist history -- but it was at this religiously and politically conservative institution that I actually found the thinkers and activists of who helped me clarify those instincts and turn them into both meaningful scholarship and daily action. I was being marginalized by some people within the school for ideas and values I had been invited to explore by others at the same institution. Complicated? Complicated.

As I wrote in response to my friend's email,

It was through Hope College that I was able to explore political feminism, feminist theology, non-straight sexuality, and connect with folks like Linda and Denslow [members of Aradia]; to ground myself in a network of intergenerational feminists who experience sexuality in myriad ways. It was an integral part of my growing into myself and arriving in a place where -- when I decided to explore my own sexual desires and seek out sexual relationships -- I was open to being with those human beings who turned me on, regardless of gender. Hope as an academic institution (and more precisely the faculty I worked with there) gave me a place to develop the intellectual and political framework to articulate myself and from that position of strength enter into a relationship that (ironically!) Hope College officially does not condone. It is sad, to me, that I can't really celebrate that learning experience with Hope as an institution because it is a type of learning that isn't valued -- it doesn't fit within the narratives of alumni achievement. The most valuable gifts that my Hope College education gave me are the things the college likes to keep at arms length. And I feel like that's their loss.

And then in a follow-up email,

My experience at Hope has given me a uniquely personal perspective on the way individuals negotiate their personal life stories within religious and educational institutions ... The fact that students and faculty at a socially and religiously conservative institution like Hope can manipulate the learning experiences in liberatory ways contradicts (in my opinion) the mainstream narrative that tends to downplay individual agency within religious/educational institutions and focus on the official message or the stories told by people with structural/social power and authority (usually not where the most interesting stuff is happening!). The complexity of the real lived experience is a difficult one to get across to people who haven't grown up in that environment or been required to develop those skills for subversion.

[Since graduating from Hope, I have become more] aware of the complex sociocultural and structural reasons students choose to attend the institutions they attend (church connections, family relationships, friendships, finances, geography, etc.) and how so often those initial choices they make cannot begin to reflect the people they become during their tenure as students. It seems to me (idealist that I am!) that it is the responsibility of a college like Hope to acknowledge that even students who may come to the college as religiously conservative straight folks could discover their sexual fluidity or finally come to terms with their orientation during their time at Hope. And I think Hope College would benefit (as both an institution and as a community of individuals) from being the sort of environment where that personal journey was embraced as a mark of individual strength, openness to change, opportunity for developing personal ethics around sexuality and political identity. Right now, the institutional position seems primarily to be one of fear, which in turn communicates to students that exploration, questioning, and change are threatening to both personal and social well-being. Hardly an attitude conducive to meaningful learning!

I am reminded of a post by Sharkfu at Feministing on the complicated balancing act of being involved in religious institutions with which you do not wholly agree. Such relationships can often be a constant re-negotiation, an assessment of whether the benefit of being involved with the institution outweighs the cost of membership (both to the self and to society). From the outside, it is all too easy to condemn people who stay affiliated with such institutions, since it is difficult to see the complexity of the relationship that person has had with that community, with that space, with those ideas, over time. And I would like to emphasize once again: I don't mean this in a purely negative way. Yes, sometimes being part of a subculture can cloud your perspective, isolate you from ideas and people that might otherwise give you a more meaningful life. But sometimes, those same subcultures can be the doorway (however inadvertently) into those very same ideas, into those very same communities, that "officially" the subculture/institution/community is attempting to police, control, or even eradicate.

In other words: while the social structure and official position of Hope College as an institution is homophobic, judgmental, and I would even say violent and anti-Christian ... for an individual person? The space created by that structure existing, and the opportunities (intellectual and otherwise) that reside in that space, could well be the doorway they needed in order to discover a much more exhilarating, loving, hopeful, potential-filled sort of world.

Such liberating potential doesn't in any way erase or mitigate the violence wrought by the official position of the college on human sexuality any more than the existence of pro-queer Catholic groups, liberation theology, and Catholic reproductive justice advocates erases or mitigates the homophobia and sexism of the institutional Catholic church. It doesn't absolve the individuals supportive of the official position from their participation in that act of violence. It does, however, suggest that such violence is also tangled up with much more nuanced interpersonal relationships. That an official institutional stance -- once you zoom it at a higher resolution -- is riddled with tiny fissures. Fissures that represent opportunities for people to grow and change, and become themselves far beyond the wildest imaginings of the college administration.

Right now, it seems like the college officials fear that wildness -- I do hope they come to embrace it for the hope and joy it can represent. Best wishes to all the folks at Hope College who are trying to help them see that possibility.

*Image credit: Nykerk Hall, Hope College, Holland, Michigan. Image from Hope College Public Relations (they keep this up and eventually I'm going to run out of scenic campus shots and have to start in on the student facebook photos ;)!).

posted by annajcook at 7:12 AM