Okay, so I gripped about this on Twitter, and then because that wasn't enough thought about posting it on Tumblr. But then the draft of my tumblr post got way longer than I planned so now it's going to be a bona fide blog post. 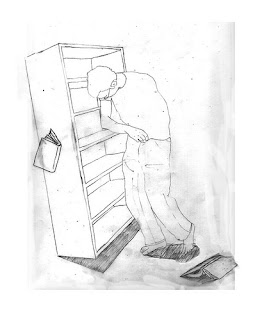 one armed man topples a bookcase (sketch)
by curablefury @ Flickr.com

AndyW @ LISNews appears to be surprised that an MLS degree does not exempt him from plebeian tasks such as checking out books to patrons and staffing the reference desk (instead of holding court in private with "people who have actual reference questions").

On any given day, I can be standing at the circulation desk side-by-side with a support staff member doing the same thing that they are doing. So long as this arrangement exists, the perception that librarianship does not require an advanced degree will continue to taint the image of the profession.

One response to this state of affairs for any individual with critical thinking skills might be to ask "if the tasks of librarianship do not require an advanced degree, then why are we requiring advanced degrees of librarians"? This is, in fact, a question that has already been asked in comments to AndyW's piece and no doubt will continue to be a subject of debate. (See, for example, my post from May on this very topic).

AndyW doesn't ask this question, however. He's pretty clear on the fact that he likes the status his library science degree grants him -- or rather, he wishes that his library science degree would give him the sort of status he imagined it would grant him. (Aside from, presumably, his ability to apply for professional positions which are compensated financially above the paraprofessional and nonprofessional level). He wants the whiff of authority. The deference. The aura of mystery, perhaps? And rubbing elbows with the working, uneducated masses just isn't cutting it.

It is a disservice to the education, to the degree, and to the profession when the bulk of a librarian’s daily tasks could be performed by someone with a GED. It does not take a master’s degree to place a hold on a book, clear a copier, push in chairs, tell people they are being loud, shelve items, or other similar tasks. When librarians are seen doing this and then told there is an advanced degree requirement, there is a reasoning dissonance that occurs in the outside observer.

Because, you see, it's all about appearance. About the need to ensure that patrons who are using the library (in ever-increasing numbers) understand Andy's credentials. What sets him apart. That, while he may be assisting his staff in a time of need, such tasks as reshelving or helping patrons find and check out the books they need to meet their information needs (or thirst for pleasure reading) are generally below him.

As a fellow librarian, may I suggest it would be a professional move to spend less time worrying that observers won’t be able to tell you apart from the paraprofessionals and "someone with a GED" (damn those lowly plebes and their ability to work with books!). To insist on the distinction, particularly in such dismissive terms, is insulting to your staff. Staff who presumably, though lacking credentials, are working in a library for a reason (and it's probably not because it pays incredibly well). It is also insulting to your patrons: is assisting them -- even if it's simply to point them toward the bathroom or unjamb the photocopier -- somehow beneath your dignity? Those "observers" whom you imagine are so obsessed with your credentials are probably, in the end, much more interested in whether their information needs are met promptly, knowledgeably and courteously than they are in whether the person meeting those needs has taken a class in Information Organization. As a commenter on the LISNews site suggested rather pointedly, "Staff who aren't willing to chip in to do ALL the things to make the library a success aren't professionals - they are just getting a paycheck." To seek professional respect by denegrating the work of non- and paraprofessionals whose service unarguably enables a library to function is (to put it bluntly) the behavior of an asshole.

Librarianship is not some giant dick-waving (er, degree-waving) contest. An advanced degree is not a magic, respect-demanding bit of psychic paper. It is, arguably, an outdated method by which certain knowledge workers in the late-19th and early 20th century made the case for their work to be given social status. But that's a blog post for another day.

In the meantime, I mostly want to say: Way to reinforce the kyriarchy, dude. In a totally uncool sort of way.

posted by annajcook at 5:26 PM