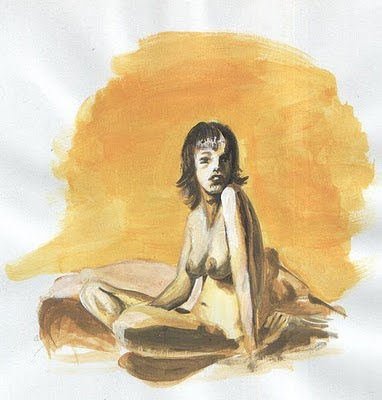 Gouache Nude Painting by Armando Martires
made available at Flickr.com
As I dive into the semester, here's a sampling of stories I shared on my tumblr blog, the feminist librarian reads, this past week. Here are a few samplings from the past week ... head on over to tumblr for more!

What Comes After the Gender Binary by Marissa @ This Is Hysteria!

"This is not the first time that I’ve seen somebody think that when I talk about eliminating the gender binary that I envision a world of uniform androgyny.

What the elimination of the gender binary means to me is that people can be as masculine or feminine as they like. But the performance of masculinity or femininity is not compulsory depending on sex. Being masculine in some respects would not put femininity out of bounds for you, and vice-versa. Gender could be played with, freely, without social sanction.

That is, there would be more variety in gender expression, not less. Instead of black and white, we would have a rainbow, not a homogenous mass of grey."

"Sex positivity is part of it. Kinky folks have often had to take a long, hard look at sexuality – their own and the world’s – and come to the conclusion that their own desires are actually completely FINE, in the context of consenting adults, and that people who don’t agree with them (a) can go fuck themselves and (b) are probably suffering from that self-imposed moralizing and narrowly conscribed ideas about sexual expression, and are therefore to be pitied.

That combination of I-pity-you and you-can-go fuck-yourself rings very true to me. I appreciate both the empathy and the lack of tolerance for bullshit."

“[Cordelia] Fine is unabashed. ‘There are sex differences in the brain. There are also large sex differences in who does what and who achieves what,’ she says. ‘It would make sense if these facts were connected in some way, and perhaps they are. But when we follow the trail of contemporary science we discover a surprising number of gaps, assumptions, inconsistencies, poor methodologies and leaps of faith.’

Combing through the latest research in psychology and neuroscience, Fine concludes that ‘the sheer complexity of the brain lends itself beautifully to overinterpretation and precipitous conclusions. It’s a compelling story that offers a neat, satisfying explanation, and justification, of the status quo.’ Fine warns that ‘brain facts’ about the sexes – in fact, stereotypes with a veneer of credibility – are worming their way into apparently scientific books.”

Read the rest over at my tumblr blog.