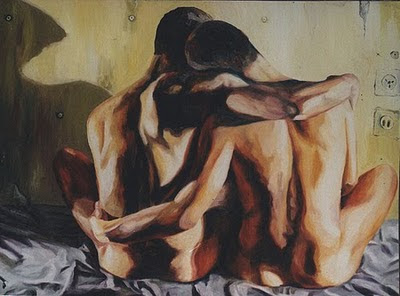 Divisions within sex and gender activism seem to have been in the virtual air this week across the feminist blogosphere. Yesterday, I linked to a few posts [discussing the use of trigger warnings]. That topic definitely took up a lot of bandwidth this week which, depending on how you want to look at it, either provided an opportunity for fruitful debate on the use of such warnings or simply upped the pageview stats of the original controvertista Susannah Breslin @ True/Slant. I'd like to think that even if it did the latter, it also prompted the former to net good effect.

Meanwhile, Ope Bukola @ Racialicious was observing another dust-up in the blogosphere, this time around the question of power and race within feminist activism.

Likewise, a number of blogs on my feeds covered the story of a British clothing chain, Primark, that has pulled padded bras for preteens after an outcry from consumer groups, many of whom took offense at the early "sexualization" of girls. Columnist Laurie Penny @ Guardian (clearly a young writer to watch closely!)argues that this is another misguided attempt by adults to police young peoples' sexuality.

Padded bras for preteens are not the problem. The problem is a culture of prosthetic, commodified female sexual performance, a culture which morally posturing politicians appear to deem perfectly acceptable as long as it is not 'premature'. By assuming that sexuality can only ever be imposed upon girl children, campaigns to 'let girls be girls' ignore the fact that late capitalism refuses to let women be women – at any age.

While I believe there's a role for parents to play in creating a safe haven for children and teens to explore their own sexuality at their own pace, at least somewhat sheltered from the media and peer culture, I agree with Penny that yanking consumer products from the shelf is not the best way to do so.

Also at The Guardian, Corinna Ferguson asks "do teenagers have the human right to consensual sexual activity?" In my own opinion, the answer you're looking for is yes. But, as Ms. Ferguson points out, the legal framework for adolescent consent in the UK is tangled at best.

While we're on the subject of sex (although it's hard to escape in these weekly posts for obvious reasons!), rabbitwhite @ sexgenderbody poses another question: what is sex? "As I counted cocks in order to lull myself to sleep, it inevitably got fuzzy. Did that one time in the cab count? Was there actual peen in vag penetration? This seem to stem from protecting the precious hymen, that invisible piece of skin elevated to such importance. That was what mattered right?"

Essin' Em @ Sexuality Happens, meanwhile, voices frustration at the way physical issues and situational stress have recently lowered her sex drive, frustrating her and her partner, Q, as they struggle to adapt.

Is it any wonder that my sex drive seems to have taken a vacation? No, but it pisses me off.

Why? Because I LIKE sex. In my head, I still want to have it 6-10 times a week like we used to. I see Q, and she’s so hot, so sexy, so much deliciousness and I want her all the time. But physically, my sex drive has gone out the window.

Do we have sex? Yes, although definitely not as frequently, and not for as long of sessions. Do I wish we had more? Again…my head says yesyesyesyesyses, my body say whatever.

Sending good thoughts toward both Ess and Q in hopes that they find some less frustrating solutions soon.

Cara @ The Curvature ponders the importance of consent in everyday situations, not just when it comes to sex. Does it matter when you tell your hairdresser you don't want shampoo and she goes ahead with the soap anyway, thinking she's doing you a favor?

Last week, I posted a couple of links to feminist blogs discussing the advent of "male studies" as the Manly answer to the wussy discipline of Men's Studies. A few more post on the topic for those who enjoy the horror: Amanda Hess @ The Sexist offers some helpful answers to pro-male-studies comments that have come her way since she wrote about the story; Pema Levy @ Women's Rights Blog points out that for a discipline attempting to exist without reference to other disciplines, male studies seems to have a lot to say about feminism and women's studies; and frau sally benz @ Feministe suggests 4 Ways NOT to Argue for Male Studies.

On a lighter, though no less amusing, note, guest blogger David Dismore @ Sociological Images offers a fascinating meditation on the rhetoric of suffragist postcards sent out in the early 20th century to secure the pro-suffrage vote.

To the delight of humorless feminist bloggers everywhere, Feministe will be hosting its annual Next Top Troll competition, in which odious, clueless, meanspirited, and often nonsensical comments left on Feministe posts are paraded by in a series of brackets and readers are asked to vote for their favorite troll, with explanations as to what tipped their vote in the comments (often well worth the read!)

And closing on an up note, Pilgrim Soul @ The Pursuit of Harpyness brings us the cheering news that the Obama Administration is moving to enforce hospital visitation rights for folks who wish to designate non-family members as their primary relationships. Obviously this is in part about queer families, but also includes the examples of religious folks who may wish the company of others in their order, or those with no close kin who wish to designate a close friend. Would be nice to see a bit more legal pressure put on institutions to recognize the variety of human relationships that exist in the modern world.