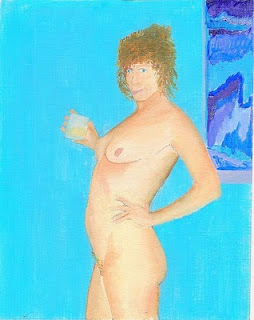 Let's see what the feeds brought in this week . . .

Last week, Miriam @ Feministing pointed us toward the shortlist for the LAMDA awards, while also highlighting the problem with having specific categories for gay/lesbian/bi/trans fiction and nonfiction.

A bigger problem can be found in Baltimore, Maryland where the Catholic Archdiocese is suing the city for the right to continue false advertising tactics that encourage women seeking abortion care to crisis pregnancy centers which do not offer abortion services or referrals. As SarahMC @ The Pursuit of Harpyness quips, "I thought 'Thou shalt not bear false witness' was a component of Christianity." Looks like maybe not.

Another way of exerting control over women's bodies can come through cultural assumptions about how our bodies work. Over at RhRealityCheck, sex educator Heather Corinna unpacks some of the cultural myths about the visibility of sexual activity (or lack thereof) on the bodies of women and girls.

Which pairs nicely with Jill's piece @ Feministe about how strange it is that being pro-sex gets you attacked for being anti-sex (yes really). She takes on the rape apologetics of a college columnist at American University and makes yet another strong argument for why framing rape as mostly a "misunderstanding" or "miscommunication" between two people ignores the act of violence that those who commit rape engage in. (Trigger warning)

It’s scary to think that someone could initially say no, then change their minds and say yes, and then say that they meant "no" all along. And that’s the picture that rape apologists paint: A fun, drunken night, and the next day the cops are at your door.

But that’s not how this really works.

Most on-campus rapists don’t identify as rapists, but they do realize that they are forcing women into unwanted sex . . . I find it really helpful to actually think through, fully, an acquaintance-rape scenario as they more typically happen . . .

. . . You’re engaging in some sexual activity with someone, and they start to pull back or their body stiffens, and they say “no.” When you look at their face, they look scared. Do you continue anyway?

You’re engaging in some sexual activity, and the person you’re with says to stop. Do you threaten them in order to convince them to have sex with you?. . .

Go read the whole thing, and bookmark it for the next time you need something to point skeptics toward.

Not only young people, of course, but a myriad of other folks who don't fit our cultural ideal of acceptable sexual hotness are relentlessly policed when it comes to personal agency. Chloe @ Feministing follows up on her post about the show Ugly Betty with another post titled "Beautiful girls are bitchy and ugly girls are nice." Chloe has also offered some great reflections on fucking dating while feminist, in follow-up to Jaclyn Friedman's interview with Amanda Hess @ The Sexist. Jaclyn has clearly provoked a lot of thought among those of us in the feminist blogosphere about the role of feminism in our personal lives and relationships.

Melissa McEwan of Shakesville, meanwhile, guest blogs at Sociological Images about the fat shaming in the television show "Jamie Oliver's Food Revolution." While I don't think there's anything wrong with media that demonstrates how to cook nutritious meals that are simple, tasty, inexpensive, I think it's important to critique shows that buy into the cultural myth that people who do not conform to our cultural standards of thinness are automatically unhealthy, lazy and immoral. And it sounds like this particular show carries those messages in spades.

I want to note that there is, buried somewhere beneath the 10 metric fucktons of fat-shaming (and not an incidental dose of misogyny, for good measure), information about healthful eating (e.g. not eating any fresh veg, ever, isn’t good for anyone), but this is information that could be delivered without a scene in which a mother of four whose husband is gone three weeks a month is told that she’s killing her children while she’s weeping at her kitchen table.

The premiere episode has absolutely zero structural critique, not even a passing comment about the reason that millions of mothers feed their kids processed foods is because it’s cheap and fast, which is a pretty good solution for people who are short on money and time.

I don't know about you, but I think it's pretty immoral to spend your time shaming folks about individual choices while ignoring the structural forces that limit their range of choices, not to mention ignoring the ways in which our assumptions about health are (partially if not wholly) culturally constructed rather than set in stone.

Also on the subject of visual representation, some Holocaust scholars are disputing the legitimacy of including images of lesbians in a holocaust memorial highlighting homosexual victims of the Nazi regime. Arguing that persecution of lesbian women was "not comparable" to that of gay men, and that using an image of two women on the memorial (as part of a rotating series of videos depicting same-sex couples kissing) "distorts history." While I think it is a legitimate scholarly point to make, that because of mid-century understandings of sexual orientation and gender men were disproportionately targeted, lesbians were hardly free to express their sexuality without punishment (see Aimee and Jaguar).

Also on the subject of queer history, Simon Callow, writing for The Guardian, muses about a new history claiming to tell the tale of "gay icons through the ages," which instead fails to engage critically in the historical debate over how valid it is, exactly, to read our own understandings of sexuality back into the past

Similar questions about changing conceptions of human sexuality plagued the characters of the web comic Cat and Girl earlier this week (thanks to Hanna for the link), as one character doesn't understand the word "cisgendered," and another has to explain. It made me think again about how vocabulary has been changing so quickly within the gender and sexuality field, and how to communicate why changing how we speak matters, even though it is by its very nature a never-ending process of transformation (language, ideally, changes as we change to better meet our needs as human beings).

And finally, on a lighter note: "President Obama—Our First Gay President?" Hendrik Hertzberg @ The New Yorker News Desk thinks not, but offers his own nominee for who might have been, at least by the Bill Clinton/Toni Morrison standard.

posted by annajcook at 7:37 AM