This new poster has been making the rounds on the blogs I read the last couple of weeks, and I actually think the title is somewhat misleading: it's not so much about what specific words are verboten (for a glossary of terms surrounding transsexuality, check out the guide put together by the Gender Identity Project) but about why certain questions or turns of phrase are hurtful to trans people. 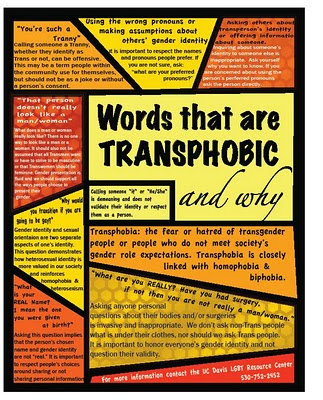 I appreciate that they include explanations along with each phrase, rather than just announcing "these words are transphobic!" When folks find themselves explaining over and over again that certain language is hurtful, the "why" often -- understandably -- gets lost in the shuffle. The "why" is often so obvious to those who are inside a given community that it can seem redundant to explain to those outside the loop why a question is hurtful. It can often be even more difficult to explain why it's hurtful without making the person on the recieving end of the explanation feel defensive.

Obviously, it's not the responsibility of those in the know to educate 24/7 about the things they're knowledgeable about . . . which is why it's handy to have infographics that do it for us!

via sexgenderbody and others.