on acquisitiveness: books I have known 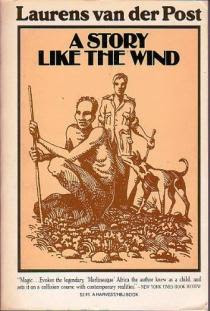 This morning, while waiting for the local Trader Joe's to open, I found myself browsing the $1 cart at the brookline booksmith once again. This time, I found a copy of Laurens van der Post's 1972 quasi-autobiographical novel A Story Like the Wind which my mother read to us when we were small. It is the story of Francois Joubert, a colonial child whose coming-of-age is disrupted by the political violence of the native community's struggle for independence.

I haven't read the book in ages and there is probably much to critique about it vis a vis the history of modern imperialism and post-colonial Africa. From what I do remember, the novel idealizes the native peoples and treads lightly over the political backdrop that gives rise to the violence that overwhelms the Joubert family.

But the point is: I bought it. Standing there, in the early morning sun, I saw this paperback book with the cover I remembered from my own childhood, and I had the sudden overwhelming urge to own the novel. Even if I never open it and read it again (possibly out of fear that, once re-read, I would no longer take the same child's pleasure in the adventure story and instead read through the critic's eye).

I wanted to own it. Needed to own it. Mostly because of a passage I remember in which the child, Francois, observes how his father -- estranged from the colonial community for his critique of imperialism and from the native community for being European -- falls ill in an adult version of what might be described as "failure to thrive." Both communities have engaged in what Francois' Matabele mentor terms "the turning of the backs," a collective shunning of the outsider. The-turning-of-the-backs. It's such a wonderfully descriptive phrase, somehow conveying the utter isolation -- and eventual death -- of the human being who is an outcast, who is rejected from human society.

So I bought the book. And now it is sitting here, on my desk, gazing up at me. And I somehow feel more at peace for having this book -- with its little piece of wisdom, its kernel of human truth tucked away in its pages -- physically on my shelves. Part of me feels bad about this: why buy the book, even at $1, if I'm unsure I'll ever read it again -- thus depriving someone else the chance to discover and enjoy it? But I do keep buying books, as much for their material objectness as for the ideas the contain. And I miss them as objects when they are not near me -- as in the hundreds of volumes still stored at my parents' house in Michigan.

I'm not sure this post has much more of a point than this: that the objectness of books still seems to matter, even in this age of the internet and the kindle, when a great deal of my reading and writing -- let's face it -- happens in front of a computer screen. Some still, small part of my soul hears and responds to the printed word as something physically tangible, and different from all those words that flow by us every day in a long string of 0s and 1s rendered in text on the screen.