As we enter 2009 -- and before I get lost once again in the maze of a busy academic schedule -- I thought I'd post a few items on the projects I completed this fall and the projects that are up for the spring semester. 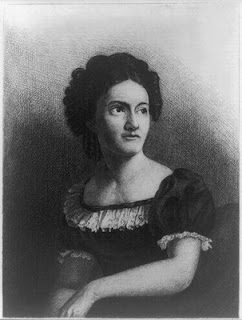 As I wrote at the beginning of last semester, this past fall I took a history seminar in the "American Renaissance," the era of great political and social upheaval took place during the decades leading up to the Civil War. The paper that came out of that course was "Inspiring 'Right Feelings': Children and Childhood in Lydia Maria Child's The Mother's Book." Child was an author and activist whose parenting manual, The Mother's Book, published in 1831, incorporated many of the latest ideas about human nature, development, and education emerging from the Romantic movement and also the social justice movements she was involved in. I was principally interested in the way Child did, and did not, make connections between her political activism children's rights. As I wrote in my introduction:

I am interested in the central role of education as a means of both self-improvement and social control plays in the parenting model Child puts forward. Belief in education as a means of self-improvement and liberation from dependence was a common thread in many antebellum reform movements. Access to education, and the role of education in ending the intellectual and material dependence of blacks and women, was, for example, a central tenet of both the women’s rights and abolitionist movements—both of which Lydia Maria Child ardently supported. Yet within The Mother’s Book Child shies away from any radical challenge to parental authority, proscribing children’s moral and intellectual independence by casting adults—particularly mothers—in the role of vigilant guardians of their children’s innate good nature.

While I hesitate to say, at this point, whether the specific topic of this paper will be relevant to my thesis, the themes of political activism, education, and the position of children and youth in American culture are definitely recurring themes in my research and writing.

Up for next semester: I'm not sure what it says about me that my heart thrilled when I got the book list for my spring course in intellectual history and saw that we would be reading complete works by Darwin, Nietzsche, Freud, and Foucault -- as well as (I am sure) selections of many other influential thinkers from the 19th and 20th centuries. I've encountered all of these crazy guys before and always walked away with something fascinating to ponder . . . even if Nietzsche makes me want to slap him and Freud did cause me to throw a book across . Hanna thinks I'm touched in the head for enjoying Foucault, but I've had a fondness for the man ever since using Discipline and Punish for my very first history/philosophy paper on children's rights.* And then there's the way he throws around words like panopticon with wild abandon . . . Stay tuned for what project emerges in May!

*Fall 2001, at the Oregon Extension program: "The Radical Belief that Children Are People." Did I mention something about a through-line in my research . . .?