subject/verdict: stuff I've been reading in two-sentence reviews [no. 5] 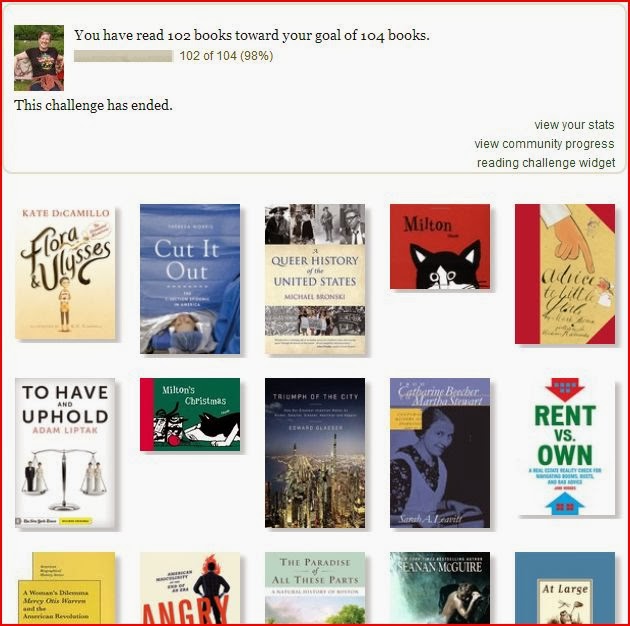 Here's a peek at the books I read between mid-November and the end of the year. Exceeding my own expectations of finishing 2013 roughly 10% short of my goal of reading 104 books (two books per week), I actually came in at 102 by midnight on December 31st. Thanks to the polar vortex, I've started this year's challenge at a good clip -- more on the ones I haven't yet reviewed in March.

In the meantime, to wrap the previous year's reads, here are a handful of noteworthy titles (in alphabetical order by author).

Bronski, Michael. A Queer History of the United States (Beacon Press, 2011). Drawing upon several generations of historical scholarship on LGBT and queer history, Bronski traces the lives and experiences of queer Americans from early Euro-colonial history to the present. One of the things I particularly appreciated about his narrative is that it is not solely focused on sexual experiences or on the lives of high-profile non-straight and non-gender-conforming people -- rather, it seeks to approach a broader view of American experience through a queer lens.

Cain, Susan. Quiet: The Power of Introverts in a World That Can't Stop Talking (Crown, 2012). Cain's work is a strong analysis of modern American culture as one which favors the strengths of a certain type of personality (here labeled "extroverted) and denigrates many of the strengths of another ("introverts"). Quiet is a good reminder to those of us who favor the quiet life to feel no guilt about working to organize our lives and spaces to play to our strengths.

DiCamillo, Kate and K.G. Campbell. Flora and Ulysses (Candlewick Press, 2013). I don't read as many middle grade & young adult novels as I used to when I was working in a trade bookstore (for shame), but happily a friend of mine has a seven-year-old son who is a voracious reader, and buying this novel for him prompted Hanna and I to read it -- and purchase a copy of our own! A delightful, if somewhat surreal, tale of a comic-loving girl, a poetry-writing squirrel, an errant vacuum cleaner, and a cast of family and friends.

Didion, Joan. The Year of Magical Thinking (Vintage, 2007). Didion's memoir about the sudden death of her husband received much well-deserved press for its finely-tuned analysis of the process of trauma and grief. What struck me most about Magical Thinking was Didion's internal conviction that death was something to be prevented and thus possibly, if the right combination of actions were performed, reversible.

Fadiman, Anne. At Large and At Small: Familiar Essays (Fararr, Straus, and Giroux, 2007). A dear friend of mine gave me this collection of essays as a present about five years ago, and I confess I only just this December got around to the act of reading them: they did not suffer for the wait! Fadiman is a master of creative nonfiction and her essays on everything from insect collecting to polar exploration, Charles Lamb to 9/11 to the joys of ice cream gave me pleasure to read and a yen to write deliberately once more.

Glaesser, Edward. Triumph of the City: How Our Greatest Invention Makes Us Richer, Smarter, Greener, Healthier, and Happier (Penguin, 2011). Glaesser makes a compelling, if slightly glossy argument in favor of dense urban centers as catalysts for creativity and an energy-efficient way to house the world's population. While I agree with much of his argument, I do wish he had been more thoughtful in addressing how the needs of those for whom human density is a struggle will be met in a pro-urban future.

Hodges, Jane. Rent vs. Own: A Real Estate Reality Check for Navigating Booms, Busts, and Bad Advice (Chronicle Books, 2012). As Hanna and I dive into apartment-hunting this year, I borrowed this slim-yet-packed little volume from our local library. Hodges provides an excellent overview of the pros and cons of both renting and buying one's place of residency and when the time came to return this one to the library shelves I felt a lot more equipped to think about options than I had before I borrowed it! (P.S. She also has an excellent "further reading" list.)

Kimmel, Michael. Angry White Men: American Masculinity at the End of an Era (Nation Books, 2013). I'll admit that I read this book mostly because if you're in any field that touches on masculinity studies, Kimmel is someone whose work you need to be familiar with (full disclosure: I had a lovely lunch with him once, as an undergrad, when he was a speaker at our campus). AWM explores the perspective of the titular angry white dude whose sense of aggrieved entitlement is familiar to all who spend time on the internet; it provides little fresh insight to those familiar with the issues at hand, but does bring good research to the table for us to mull over in the years to come.

Liptak, Adam. To Have and Uphold: The Supreme Court and the Battle for Same-Sex Marriage (New York Times, 2013). This brief e-publication is an excellent summary, with some analysis, of last year's two same-sex marriage cases argued and decided before the Supreme Court. As someone who followed the cases fairly closely at the time, I can't say I learned a whole lot that was new -- but am still glad to know this source is out there in the event I need to refer back for details.

Mitchell, John Hanson. The Paradise of All These Parts: A Natural History of Boston (Beacon Press, 2008). A dollar-cart find, Mitchell's "natural history of Boston" is more familiar essay than scholarly history, with few source notes and a conversational style. Nonetheless, I found it a pleasure to read -- perhaps only in the way one can when a book charts the landscape which one navigates on a daily basis.

Morris, Theresa. Cut It Out: The C-Section Epidemic in America (New York University Press, 2013). The latest in a growing list of texts critiquing the American way of birth, Morris' insightful analysis of the c-section epidemic in the United States draws on qualitative interviews with parents who had just given birth, nurses, midwives, and doctors to argue that neither pregnant women nor medical staff are to blame for the trend. Rather, she convincingly asserts, institutional cultures and the insurance industry push hospitals to define risk in terms of risk-of-lawsuit rather than risk-to-patients, leading to a deeply concerning trend away from centering best practices on the health and wellbeing of the pregnant parent and infant themselves.

Walker, Lisa. Looking Like What You Are: Sexual Style, Race, and Lesbian Identity (New York University Press, 2001). Recommended by a friend, I found this a useful exploration of what it has meant in the late twentieth, early twenty-first century to perform lesbian identity visually and bodily -- Walker asks us to think about who is recognized (and trusted) as a lesbian, and why. As someone who has walked both sides of the queer-coded line (people have been both surprised I'm queer and told my parents they'd known all along [how could they when I didn't myself, right??]) I found this a thoughtful reflection on the boxes we attempt to put people into, and how human diversity defies such categorization.

And for a sneak peek at what I've been reading this year, you can always find my current bookshelf in "real time" and my complete year-to-date list at the GoodReads 2014 reading challenge.

What's on your (reading) plate this year?
posted by annajcook at 8:30 AM