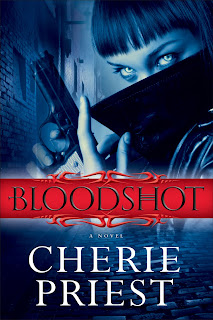 Hanna and I are off to Maine for a four-day weekend today and I thought I'd leave you with a little summer reading to pass the time. Last week, when the temperatures climbed passed 100 degrees fahrenheit here in Boston and we took refuge after work at the Prudential Center mall, Hanna bought me a copy of Cherie Priest's Bloodshot, the first installment of a promising series called the Cheshire Red Reports.

This is my first Cherie Priest novel and you bet I'll be going back for more. Bloodshot follows the adventures of a free-lance (thief? private investigator?) named Raylene who lives in Seattle and happens to be a vampire. Bored and ready for a challenge, Raylene accepts a job offered to her from a fellow vampire -- even though he warns her it could be dangerous -- and ends up with the feds on her tail and the lives of the few people she cares about at stake.

I was a particular fan of the character of Raylene, whose hard-boiled detective persona doesn't feel overly forced. Priest managed to walk the fine line between making a female protagonist so matcho it hurts (and screams "fuck femininity and all it stands for!") and making Raylene a vampire vamp. Raylene is also fallible and unreliable without falling into the trap of some other urban fantasy women (yes, Anita Blake, I'm thinking of you) of constantly seeking male attention or affirmation. I think she and Patricia Briggs' Mercy Thompson would possibly get on well together. The other characters include Ian Stott, vampire, and his hipster ghoul Cal; Pepper and Dominique, two Baker Street Irregulars who squat in one of Raylene's properties in exchange for their observation skills; and Adrian deJesus/Sister Rose an ex-military man turned drag queen. Most of whom look to be returning for installment two: Hellbent. So if you're looking for some good summer reading, this one comes highly recommended. Particularly since, if you like it Cherie Priest has written lots more.
posted by annajcook at 8:00 AM