sunday smut: links list on sex and gender (no. 10) 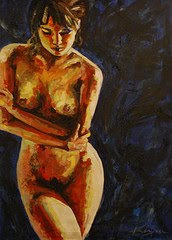 "Turkish police have recovered the body of a 16-year-old girl they say was buried alive by relatives in an "honour" killing carried out as punishment for talking to boys." Robert Tait @ The Guardian wins for "most horrific sexuality and gender related story of the week" with his story of a Turkish teenager who was killed by her family for transgressing their expectations of appropriately feminine behavior. I wish to point out that, rather than demonstrating some yawning chasm between "West" and "East," this sort of action should be seen as a symptom of our global preoccupation with the purity and virginity of girls and women.

"It's maddening that the people who want to take away women's right to choose have annexed "choice" to their own cause. If the law compelled women like Sarah and Bristol Palin and Pam Tebow to continue problem pregnancies, there would be no heroism in doing so--you don't get much credit for taking the difficult path if that's your only option." Katha Politt @ The Nation vents about the current politics of abortion in her latest "Subject to Debate" column.

"One of Blankenhorn’s leading concerns is with the well-being of children. He has argued, citing solid studies that corroborate this, that children raised by single parents are, as a group, at a disadvantage, and that having two married parents is a boon to children. But surely this raises the question: wouldn’t same-sex marriage help the children of same-sex couples...?" Margaret Talbot @ The New Yorker News Desk wonders why the pro-gay-marriage side in the Prop. 8 case hasn't pushed the antis harder on the question of how gay marriage will hurt families in Gay Marriage and Single Parents.

And further, Talbot suggests that "You sometimes hear it said that a courtroom is not the best venue for playing out battles in the culture wars [yet] a courtroom can also be a great and theatrical classroom, where the values of thoroughness, precision in speech, and the obligation to reply have a way of laying bare the fundamentals of certain rhetorical positions." See The Gay-Marriage Classroom.

"I’m not sure. Can your partner be your best friend? If so, can you still have other best friends? And if they can’t be your best friend, then what are they?" Essin' Em @ Sexuality Happens muses about the delicate line between "friend" and "significant other" in My New Best Friend.

"When I close my laptop and head to work, I'm not exactly sure what's going on in the world, but I do kind of question whether I'm pretty or young-looking enough to navigate it." Christina C. @ the Women's Rights Blog argues that science reporting on "studies" supposedly determining optimal human attractiveness are as biased as the advice columns in women's fashion magazines in Sexy Science: From Lips to Hips to Cheeks, Studies Rank Women.

"Recent hopes that Apple was about to unveil an electronic device that could do absolutely anything were dashed when it became obvious that the iPad cannot in fact locate the G-spot. Nor can it fit in your handbag, which is another reason why women are disappointed by it." The Independent weighs in on the kerfluffle about women's sexual pleasure and "the geographical whimsy with which the mystical G-spot appears to operate (or not)" in Yes, Yes, Yes, No, Yes!

In other sex-meets-science news, Jill Filopovic @ The Guardian comments on the latest study on abstinence-until-marriage propaganda in sex education. "If there is one thing that has proven true throughout human history, it's that people like – scratch that, love – to have sex...Of course, for a lot of us, the 'going forth' part is more desirable than the actual multiplying, and so human beings have also spent centuries trying to separate one from the other."

And finally, for your "weird but true" story of the week: "Senator Saxby Chambliss, the Georgia Republican, warned [in Senate hearings] that 'the presence in the armed forces of persons who demonstrate a propensity or intent to engage in homosexual acts' would be likely to create an atmosphere susceptible to 'alcohol use, adultery, fraternization, and body art.'" Lauren Collins @ The New Yorker News Desk reports on the Senate hearings about the military's "don't ask, don't tell" policy concerning sexual orientation and kindly alerted me to the hitherto under-reported link between same-sex attraction and the desire for ink.

Note to self: must really see about getting that tattoo I keep talking about.