These "movienotes" posts seem to take me about a week to actually get around to finishing. Last Sunday, we went to see the new Henry Selick feature, Coraline, which is a stop-motion animated film based on the novella by Neil Gaiman. Despite being an animated movie based on a book marketed to middle-grade readers, like other Selick films (eg Nightmare Before Christmas and Corpse Bride) Coraline is not a film for younger children (unless you know said children very well and have pre-screened the film yourself with them in mind). It is about a child who, moving into a new house, stumbles into an alternate version of reality controlled by an evil spirit, the Belle Dame, who devours children and kidnaps her parents, all the while insisting she is Coraline's "other mother," her better mother, and becomes very, very nasty when canny little Coraline resists her attempts at seduction. 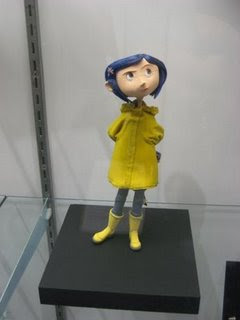 The book is a deeply scary, compelling read; and with that version of the tale in the back of my mind, I'm sorry to say I wasn't that caught up by the narrative of the film. They shifted locations from London to southern Oregon, and added characters that leeched away the ingenuity of Coraline-the-book-character. I was also disappointed by the film version of the cat, whom I remember playing a more central role in the novel (although to be fair, it's been a few years). The women at Pursuit of Harpyness have a round-table discussion going about the film that likewise raises some questions about how the story adaptions changed the nature of the story and, in some ways, made the central narrative of a girl who successfully combats an ancient evil confused and unsatisfying.

Yet all is not lost!! Taken on its own terms -- particularly as a visual accomplishment -- the film was totally worth seeing. Whether you end up seeing it in 3D or regular format, it's overflowing with color and spectacle, and manages to walk a line between whimsical and eerily wrong quite adeptly. It was the small details in the film that, for me, made it worth watching. The switch from England to America was jarring, but I was won over by the fact that Coraline's family (in the film) moves to southern Oregon, to the outskirts of a town boasting a Shakespeare festival -- the town is unnamed, but is obviously an allusion to Ashland, near where I went to school for part of my extended undergraduate career. Not only did they move to a place I know and love, but they also moved from a place I know and love: Michigan! Coraline and her parents relocate from Pontiac, Michigan, and her father sports a Michigan State sweatshirt for most of the film. This is apparently a wink to one of the producers, who graduated from the school, and it led to an entertaining game of spot-the-Michigan-references. I was also charmed by the song written and performed by They Might be Giants, even though it was part of the "other mother"'s not-quite-right world.

posted by annajcook at 2:44 PM