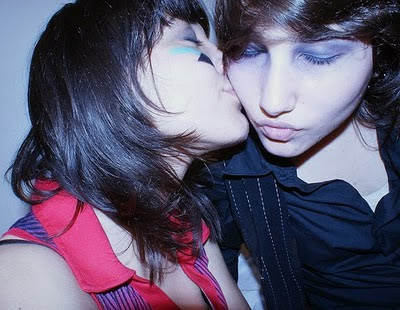 Welcome! This week in sex and gender ...

New Blog: Anarcha-feminism: it's about as scary as it sounds. Complete with rainbows and happy trees and coloring outside the lines!

Michaela Borg @ Ms. Blogs | Shoulder to Shoulder: UK Suffrage Postcards! The images are definitely worth the click-through if you're into vintage postcards + feminism ... I mean, really, what's not to like??

Anna North @ Jezebel | Terrifying weight-loss ad will make you lose sleep. Video and commentary. "First of all, it's obviously not true that fat people can't tie their own shoes or lead exciting lives. But what kind of exciting life is depicted here anyway? Trench warfare? A firing squad? A bleeding knife? These are the worst reasons to lose weight we've ever heard (and we've heard some bad ones)."

Jacelyn Friedman @ Feministe & Yes Means Yes | On Sex and Compromise (Feministe) and On Sex and Compromise (Yes Means Yes). Cross-posted discussion about the ethics of sexual negotiation in relationships vis a vis the concept of "enthusiastic consent" as the ethical standard for relational sex. I share both posts because the comment threads on both are crucial to fleshing out the conversation as it evolved.

Minerva @ Hypomnemata | Armed and Alarmed [No Sex as Weapon]. My friend Minerva challenges Jacelyn's reading of sexual negotiation and compromise from her perspective as someone with an asexual orientation.

Vexing @ Feministing Community | "I wouldn't fuck a trans person." On why saying this is transphobic. Full stop.

Richard Florida @ The Daily Beast | America's Top 20 Gayest Cities (in pictures!). Shared mostly because my brother and his girlfriend (Portland, OR, #8), my sister and her boyfriend (Austin, TX, #7) and Hanna and I (Boston metro, MA, #4) all make the list. Coincidence? Likely not! Also, I find it fascinating that Florida is "surprised" that Columbus, Ohio, made the list (#16). If you're from the Midwest and in the queer community this really wouldn't come as a surprise at all!

Thomas @ Yes Means Yes | The Slut-Shaming Kind of Feminist. Really not much of a feminist at all.

Courtney @ From Austin to A&M | ForeverGeek does it again! On (once again) why personal experience -- while legitimate -- is not a replacement for analysis of larger patterns. "How has this adult geek woman never considered, when she writes for a blog where she is a token lady, that she is in a male-dominated culture? Seriously."

Tracy Clark-Flory @ Salon | Transgender widow put on trial. Nikki Araguz is being sued by her husband's family, following is death while on duty as a firefighter in Texas. The husband's family claim the marriage was invalid due to Nikki's trans status. Autumn Sandeen @ Pam's House Blend has more.

Charlie Glickman @ Adult Sexuality Education | Shame as a Public Health Issue. He's talking specifically about trans/queer youth and safer-sex practices, but I'd say shame itself is a public health concern, given the detrimental effect self-hatred and shame have on quality of life and the ability for someone to feel worthy of sexual pleasure.

And finally, Hanna @ ...fly over me, evil angel... | friday fun times. Hanna has a round-up of the photographs from Comic Con of geeks counter-protesting the Westboro Baptist Church haters, who came to rain on the Comic Con parade. When in doubt, fight hatred with laughter. Humor always wins (or at the very least, has a good time!). Just sayin'.

posted by annajcook at 7:28 AM