from the archives: when work and life collide


So the other day at work when I was searching the Library of Congress authority files (where librarians go to verify how to construct subject or name entries while cataloging) I had the idea to look up my grandfather, a published author, in the database. And lo! 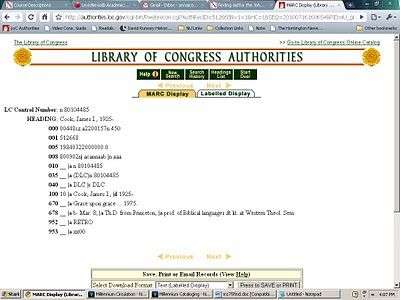 There he is, Cook, James I., 1925-. It's super strange to see someone you actually know listed in the Library of Congress catalog, and have their identity described in an authority record like this.

Even though he died May 1st, 2007, the catalog entry doesn't reflect that because unless there's an immediate need to change the authority record the LoC usually doesn't. They just leave it the way it was when they first created the file.

Anyway, that was my little sliver of enjoyment for the day. Library geeks will get some fun out of it, and the rest of you can make of it what you will.

posted by annajcook at 7:54 AM