not cool, alma mater: a bit of a rant


My alma mater, Hope College, has been making minor waves in the news recently due to the administration's unwillingness to approve an invitation by students to screenwriter Dustin Lance Black (who won an Oscar last year for Milk) to join in a roundtable discussion on human sexuality. Since Hope is a college with strong ties to the Reformed Church in America (RCA), and the denomination -- like most Christian denominations -- is currently split over the issue of homosexuality, this not really a surprise to anyone who knows the campus: the invitation was bound to be controversial. 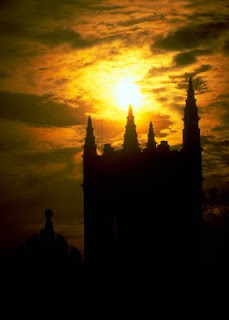 Since the late 1990s (as I was starting to take classes on campus as a teenager), sexuality and gender in the context of Christianity have been a flash point at Hope, much like they are in the wider culture. During the 1998-1999 academic year, when I was taking first-year courses in English and Religion, the campus was rocked by explosive debates over feminism, sexuality, and the place of Christianity in higher education. My own adult political awareness -- the decision to identify myself politically as a feminist, and my engagement with the politics of human sexuality -- has its roots in that formative adolescent experience. Thankfully, as a seventeen-year-old, I saw faculty, staff (including my own father) and students speak out forcefully against bigotry at the same time that I was witnessing the intolerance that characterizes certain conservative Christian worldviews.

The exhilaration and pain I experienced that school year of 1998-99 profoundly shaped my relationship with Hope: from that point forward, I knew that however supportive and intellectually challenging my professors were (you were awesome, folks!), Hope College as an institution was not interested in championing an open and affirming vision of Christianity or of a broader human community. Because of that, the school has never truly earned my trust or my allegiance. In conversations I've had this week with my sister (a current student) and some of her friends, I can see a similar trajectory in the growth of a whole new generation of students.

I know first-hand how painful and personal the politics of these denominational and institutional conflicts can be, and I recognize the powerful sway of conservative donors and the strength of religious convictions -- even when I believe those convictions to be theologically misguided and inhumane. It's complicated, and I'm usually the first to admit that. But damn, Hope. You guys gotta learn. And you really need to quit hiding behind the waffling of the church and the fear of losing donors. 'Cause you're sure as hell losing future donors now. Not to mention doing a patently crap job of modeling civil discourse and educated, educative discussion.

How old are we -- two? Is it impossible to imagine students having thoughtful conversations about issues they have deep personal convictions or questions about? If they can't have those conversations on a fucking college campus where can they have them, exactly? Can we please exhibit some mature behavior here and demonstrate that thoughtful people can disagree without chewing each others' arms off? And can we please, please pause for a moment to consider what sort of message non-conversation is sending? Possibly (shock! horror!) recognize that certain members of the Hope College community, past and present, have felt "hurt and marginalized" by the institutional reluctance to have open conversation? Not talking does not make the scary bad feelings go away. It just puts them (all too often) on the shoulders of people with less political and financial clout. Which is not an unexpected tactic, but still deserves to be called out and identified as the sort of immature abuse of institutional power it is.

I've been thinking a lot this week about the folks I know who continue to work and learn in that sort of environment, and I'm sending good vibes their way. I learned ten years ago that I, personally, have limited energy for front-line action in these sorts of political and educational battles. But I deeply respect the people -- including many friends and family -- who have the guts to keep on speaking up day after day after day in less-than-perfect situations, doing their best to make the next day a little bit better. So thank you all for being there for me, when I was a student, and to all of you -- faculty, staff, and students alike -- who are continuing to make Hope a place where marginalized folks who are there can, despite the odds, find emotional and intellectual support, and forge a worthwhile learning experience for themselves.

To the folks who didn't, and aren't, I realize this probably means little to you, but you are on my shit list and I will see to it in my own behind-the-scenes way that you have as little power to fuck with peoples' well-being as possible. End of story.