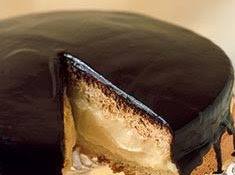 My friend Megan, the fabulous baker, wrote and asked when I first got to Boston if I had had Boston Cream Pie yet, what exactly it is, and was it any good? I had to answer "no" to the first question, and thus had no idea about the answers to questions 2 and 3. I promised to hunt some up, try it, and report back. 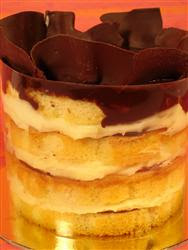 Today, I finally got around to doing just that at the Omni Parker House hotel, which is credited with actually creating the "pie" back in the 19th century. The dessert is actually a vanilla sponge cake cut in two layers with a vanilla custard between and some sort of chocolate glaze over top. Apparently there are endless variations. The one I had today included almond shavings, whipped cream, and strawberries, and looked more like this version (right) than the one above. Unfortunately, I neglected to take my camera, so don't have a genuine "Anna's Boston Cream Pie" visual.

posted by annajcook at 7:11 PM