I spent the morning today at the Department of Conservation and Recreation (DCR), my internship site for the Intro to Archives class I am taking this fall. I am working for the plans archivist at the DCR organizing and indexing a series of approximately 300 land plans (maps) which record the acquisition of lands by the Metropolitan Parks Commission in the late 1890s. Many of these plans originate from the firm of Olmsted, Olmsted and Eliot, the famous landscape architects.
Here is a detail from one of the maps I worked with today: 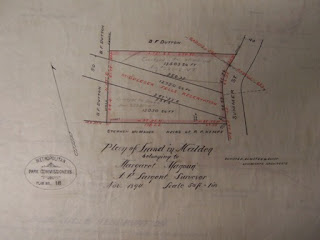 The plans, most over 100 years old, have seen heavy use and are fragile. Their edges have been torn and taped with scotch and masking tape, or repaired with bits of paper and other materials. My supervisor, Judy, is hoping to assess what we have and what the preservation needs are so that the department can apply for grant money to fund conservation work for the plans (which, she tells me, runs something like $500/sheet). Meanwhile, to make the plans accessible and to ensure that a minimal amount of damage is done as they are handled in the future, I am putting them in folders and creating a digital index in Excel.

The hand-drawn detail is full of fascinating variety. For example, compare these three directional markers, which appear on the maps to denote North:

While I have not had the time to do any background research on the individuals involved in the surveying and execution of these plans, I did find this little tidbit when I compared the maps with the accession records (which give information about when the archive acquired which plans). One 1901 duplicate of an original survey map was done by an I.C. Rogers: 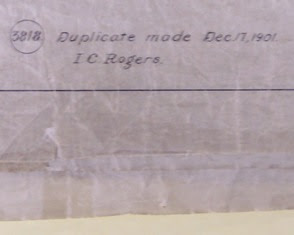 In the accession book, the entry notes that the plan was made by "Miss Rogers." So apparently, I.C. Rogers was a woman (and the only identification of that kind I have run across; all others are noted in the records simply by last name). This I may have to pursue . . .

You can see larger versions of these photos, and more, in the DCR album at Picasa.

posted by annajcook at 8:47 PM