A Day on the Harbor Islands 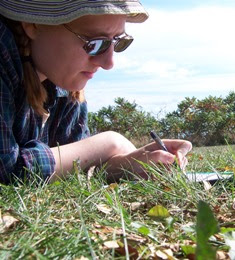 Since I have an interview with the Massachusetts Historical Society for an assistant librarian position tomorrow, I took my "day off" today and spent it, well, reading literature on archival appraisal theory . . . but at least I did it in a national park! I took the Harbor Islands Ferry from Long Wharf in downtown Boston and stopped at both Georges Island and Spectacle Island, where I wandered around taking pictures and intermittently doing my assigned reading.

Georges Island is the home of Fort Warren, built just prior to the American Civil War and active as a military base until after WWII. I find abandoned military forts creepy, haunting, and strangely compelling. There's something satisfying about the fact that they are no longer in use and that the earth is showing signs of reclaiming sites that witnessed a lot of human violence and suffering. But turning these fortresses into parks where people picnic and play is also a bit disturbing--a way of domesticating architecture that was built for much more chilling purposes.

Aptly, I spent my time there reading historian Nell Painter's essay on the psychological ravages of institutional slavery on slaves and owners alike.

From Georges you have a clear view of Boston Light, the first lighthouse to be established in North America, it was lit in 1716 and today is the last remaining American lighthouse to be occupied by an actual lighthouse keeper.

From there, I took the ferry to Spectacle Island, which affords views of Logan Airport, the Boston skyline, and lots of oceangoing traffic. It was strange to see sailboats moving back and forth beneath low-flying jets coming in for a landing.

posted by annajcook at 2:48 AM

Email ThisBlogThis!Share to TwitterShare to FacebookShare to Pinterest
labels: boston