So I've been on Twitter for a couple of years now, but in a very private-personal way. I keep my Twitter account locked down to followers who are close friends and family.

In my headspace, Twitter and email are the two online spaces where I don't have to worry about presenting myself as I want the world as a whole to see me. I'm not a very private person -- and as readers of this blog are aware, there are few topics strictly off-limits. But in spaces where the whole world (potentially) has access, I do try to turn on the Articulation Meter and the Civility Filter rather than hanging out in the Accusing Parlor or the Angry Dome.

I use Tumblr to share links of note (and pictures because what's Tumblr without pretty things?) but when it comes to sharing my own writing on the interwebs, or quick action alerts, etc., I increasingly find myself wishing I could just make a single tweet or two "public" without losing the privacy of my locked account.

You see where this is going, don't you?

You can now find the feminist librarian on Twitter: @feministlib. 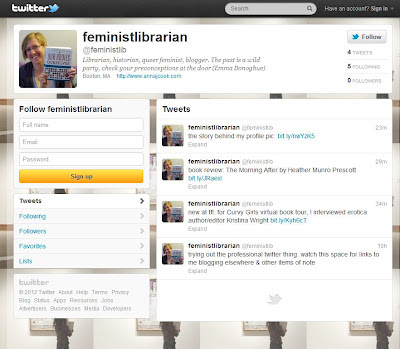 My plan is to use @feministlib primarily to share links to stuff I've been writing in various online spaces. I'm also going to sync it to my (heretofore moribund) Facebook status updates, so for folks whose social networking drug of choice is the Book of Faces (as my friend M. calls it), you'll be able to find me there.

My Facebook account is closed to non-friends, but I'll pretty much "friend" anyone who isn't obviously schilling and/or trolling. I use my metered-filtered voice there and everything!
posted by annajcook at 6:49 AM