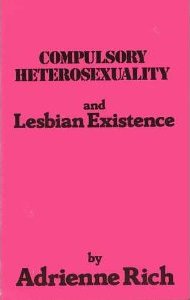 I recently unearthed a pamphlet copy of Adrienne Rich's "Compulsory Heterosexuality and Lesbian Existence," originally written in 1977 and published in Signs in 1980 (vol. 5, no. 4). "Compulsory Heterosexuality" is one of those essays that more or less permanently altered the way we think about the cultural discourses surrounding women's sexuality and women's relationships. It's the essay that brought us the term "the lesbian continuum," and -- although it doesn't use the term -- described the forces of heternormativity [link] which foster queer invisibility in mainstream culture.

It does not age particularly well.

Well, that's not entirely fair. The language of "Compulsory Heterosexuality" is the language of the mid- to late-1970s lesbian feminism. On one level it speaks to a very specific set of issues within the feminist and gay liberation movements of the period. By the time the essay was re-published in pamphlet form by Antelope Publications in 1982, Rich herself felt compelled to write a forward in which she discussed "the way [the essay] was originally conceived and the context in which we are now living." In the span of a few short years the context had shifted to such an extent the essay appeared to need an explanatory (and somewhat apologetic) preface. At the same time, if a contemporary reader (in this case, me) can look below the anachronistic language and consider -- in historical context -- the argument Rich is making, there are some important and still relevant points for us to consider.

So in the spirit of civic duty, I've read it so you don't have to!

(Though if you're interested in knowing this piece of feminist and lesbian history first-hand, I do actually recommend you go straight to the source and not rely on my own note-taking abilities.)

Let's look at the good stuff first, and then tackle the not-so-good later on.

Rich wrote this essay, as I mentioned before, with a very specific audience in mind: feminist scholars and activists who were interested in thinking about the place of lesbians (I'll discuss definitions in a minute) within the women's movement of the 1970s. Rich argues that within the mainstream feminist movement, lesbian lives are rendered invisible -- and that by erasing lesbians from feminist activism, feminist activists are cutting themselves off from an important source of female solidarity, which in turn is an important resource for combatting gender-based oppression. As long as women percieve heterosexual partnerships as their only option, they will avoid intimate female friendships that might become a basis for emotional and material support in opposing sexism. To support her argument, Rich draws on a number of contemporary examples of feminist writing in which women are presumed heterosexual, or in which the existence of non-straight women is acknowledged but then glossed over. This heterocentrism within feminist writing is still an issue, though the situation has (I would argue) grown far less dire over the intervening decades -- straight feminists are less defensive about being percieved as lesbians, and gay rights have definitely become part and parcel of mainstream feminist activism, even though we can debate endlessly which issues get the attention and why (trans rights anyone?).

A secondary point Rich is trying to make is that because of their experience as women, the lives of lesbians are not adequately represented by a discussion of "gay" (implicitly male) experience. This was particularly true during the 1970s when the gay male and lesbian subcultures had significantly diverged -- the men towards pre-AIDS bar and bath-house culture, the women toward lesbian-separatist "women's" culture. Obviously the separation was far from total, but it was still significant. Even if gay male and lesbian lives had been more similar than not, Rich's basic point that discussions of gay male experience don't substitute for actually considering lesbian experience is still a relevant one -- similar to the by now familiar argument that one can't make generalizations about "human" physiological experience or health when one's sample population is entirely male.

And finally, I think that Rich's emphasis on the "lesbian continuum" of female relationships, and her attempt to include as wide a range as possible of relationship types in her definition of what "lesbian existence" constitutes, in some sense presages our early-twenty-first-century discussions concerning the wide variety of intimate relationships and how individual our sexual identities and practices are. While she assumes on some level an innate sexual orientation, Rich also suggests that heteronormative pressures mask the full range of women's desires, and artificially push them toward heterosexual partnerships to the exclusion of other relationship formations that might suit them better ... whether that means a lesbian sexual relationship or something else.

The not-so-good parts are those which are mired in 1970s-era feminist discussions of hetero sex as an oppressive institution (which makes theoretical sense if you're thinking in structural terms, but has limited application to individual relationships), the gender essentialism, and the bias toward all-female spaces that creep in to her argument. "Women-identified women" is the concept we get in to here: to be "women-identified," and part of the lesbian continuum, is "a source of energy, a potential springhead of female power, violently curtailed and wasted under the institution of heterosexuality" (29). This argument makes sense if one is looking at the relationship between men/maleness and women/femaleness in terms of oppressors and victims (yes, those in power benefit when those being oppressed are kept divided from one another, are kept from forming alliances). However, I would argue that we understand more clearly today that people of all genders suffer under the inequality of kyriarchy and that simply coming together as women will not automatically give us access to "female power" ... there are plenty of "women-identified women" who have a vested interest in promoting existing injustices. Plenty of women with strong female friendships have zero interest in seeing themselves as part of a "lesbian continuum."

And I think I'll leave it there. Check out "Compulsory Heterosexuality" one of these days when you have an hour and the patience to wade through some fairly dense and historically-situated theory. You can access the text online at the University of Georgia.
posted by annajcook at 8:01 AM