"What do you mean by counterculture?" 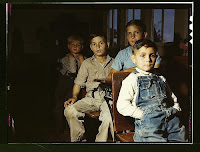 One of the first tasks on my list at the end of the spring semester was to draft a proposal for an independent study in the fall that is designed to lay the groundwork for my history thesis (gulp!). The thesis is an oral history-based project documenting the early years of the Oregon Extension program, from 1975-1980, and placing the learning environment that faculty and students created there in a broader cultural context. One of my goals for this project is to incorporate some of my work into the writing I do for this blog, so that y'all can get a sense of what I do in my day job (or at least one of them) as an historian-in-training. With that in mind, here's a blog post to get the ball rolling: a personal reflection on the language I use to describe what I research, and why I've settled on the terms I have.

Since starting graduate school, I've been asked far more often than I used to be to define my scholarly interests in ten-second, sound-bite terms (a task which, as those of you who know me well can attest, has never come easily to me). As an undergraduate, I always chafed against trying to encapsulate what I do as a thinker and writer in terms of a single academic discipline or area of interest. I am a historian by training, a feminist by political persuasion, with background in women's studies, and a passion for thinking about how people make sense of the world. In the past, I have variously described this focus as an interest in intentional community, feminist activism, experiments in living, radical pedagogy, unschooling, radical, progressive, experimental education, and a number of other phrases.

More recently, when asked to give a short-hand version of my thesis research, I've been using the phrase "countercultural education" as the broad, umbrella term for where my academic interests lie. I used it just this week in an email to a researcher who contacted the Massachusetts Historical Society interested in the [[papers of nineteenth-century education reformer Horace Mann]]. The researcher wrote back and asked me, out of personal interest, to clarify what I meant when I used this term "countercultural." Her question forced me to back up and reflect on why "counterculture" feels like the most appropriate, useful shorthand to me -- and whether it serves me well in conversations with my colleagues, mentors, and friends.

What appeals to me about the term "counterculture" is that, in a single compound word, it identifies my interest in radical worldviews -- worldviews that are fundamentally different from those espoused by the dominant educational culture -- while also not limiting my focus to a single movement or ideological persuasion. Historian Ron Miller, in Free Schools, Free People: Education and Democracy After the 1960s, describes countercultural pedagogy as educational practices that seek to "educate children and young adults according to a set of attitudes, values, and beliefs in direct opposition to those of the predominant culture" (3). That's a definition that goes beyond concepts of "left" or "right" political views, or particular historically-situated movements or schools of thought, like mid-twentieth-century home education, the early-twentieth-century progressive educators, or (to use Miller's example) the short-lived free school movement of the 1960s.

While some of these historical movements represent countercultural values I strongly identify with on a personal and political level, my interest in educational practice goes beyond interest in a particular set of countercultural values. I am fascinated with the way in which education as an activity and the spaces in which educational activities take place are used as tools for training young people in different ways of being in the world, and in different ways of making sense of that world and their place within it. I am particularly interested in the instances in which the activities and spaces that individuals or groups of people find useful for this making-sense activity are different from the mainstream values and practices of their own context. What prompts them to seek alternatives? What methods do they choose? What vision for human growth and community do they see their educational practices resulting in, and why does that vision make sense to them? As I have written before, these critiques of mainstream culture can come from any point on the political spectrum, and the diversity of both educational practice and the expected results of those practices are dizzying in their variety.

The one reservation I have with identifying my work as the study of "countercultural education" is that it defines my research subject in terms of what it is not: predominant educational norms. The trap of defining oneself (or one's topic of research) as "not thing X," and forgetting what the subject is standing for, rather than against, is one I do not wish to fall into. However, thinking of what I am embarking upon as one chapter in the history of countercultural education in American history is, for now, a useful starting point. A starting point out of which, I hope, I can begin to discern what it is the specific individuals I am studying valued and believed important to share with following generations.