Quick Hit: Unschooling could save the world? 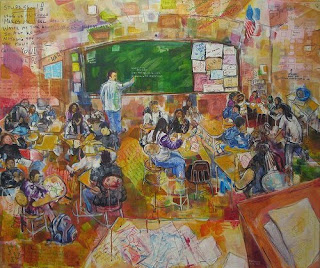 As I am in the midst of finishing a seminar paper on Carl Rogers' 1969 book Freedom to Learn: A Vision of What Education Might Become, my friend Joseph forwarded me this link to Dave Pollard's review of a new book, 101 Reasons Why I am an Unschooler, written by blogger P.S. Pirro (whose blog feeds are now definitely on my iGoogle page). Pollard begins his review by an account of his own experience with self-directed learning during his adolescence, and then writes of Pirro's book:

PS presents 50 reasons why schooling is, in every imaginable way, bad for us and our society, and then 50 reasons why unschooling, which she defines as "learning without formal curriculum, timelines, grades or coercion; learning in freedom" is the natural way to learn. She argues that we are indoctrinated from the age of five to cede our time, our freedoms, and what we pay attention to, to the will of the State, so that we are 'prepared' for a work world of wage slavery and obedience to authority. We are deliberately not taught anything that would allow us to be self-sufficient in society. And in the factory environment of the school, where teachers need to 'manage' thirty students or more, ethics and the politics of power is left up, from our earliest and most vulnerable years, to the bullies and other young damaged psychopaths among our peers, to teach us in their grotesquely warped way. As PS explains, it is in every way a prison system.

Unschooling, by contrast, starts with the realization that you 'own' your time, and have the opportunity and responsibility to use it in ways that are meaningful and stimulating for you. When you have this opportunity, you just naturally learn a great deal, about things you care about, things that will inevitably be useful to you in making a life and a living. Your learning environment is the whole world, and you learn what and when you want, undirected by curricula, textbooks, alarm clocks and school bells. You develop deep peer relationships around areas of common interest, once you're allowed to explore and discover what those areas of interest are. And the Internet and online gaming allow you to make those relationships anywhere in the world, to draw on the brightest experts on the planet, and to communicate powerfully with like-minded, curious people of every age, culture and ideology.

Many people argue that unschooling will only work for the very brightest and most self-disciplined children. On the contrary, I think we are all perfectly suited to unschooling until the school system begins to beat the love of learning, the ability to self-manage, curiosity, imagination and critical thinking out of us. By the time we have reached the third grade it becomes much more difficult, and my success in unschooling in twelfth grade was, I will agree, due to my above-average intelligence and initiative -- most of my intellectually-crippled peers just couldn't manage by that time without the strictures they'd become accustomed to. They had long ago lost the desire to learn, and to think for themselves.

I would quibble with his "my above-average intelligence and initiative" explanation for his unschooling success; the answer to why he thrived and others did not in a more unstructured learning environment was likely way more complicated than "I was smarter." I don't think anyone truly loses the desire or ability to learn and think in a self-directed fashion.

Rather, I would argue, it just takes some people longer than others to reclaim that desire -- and they have to decide they want to reclaim it in the first place. Folks in the home education community have long recognized that there is a "deschooling" period for kids that often lasts in direct proportion to the amount of time they have been in institutional schools before they bounce back and learn to pay attention to their own desires again. This can take patience and often looks, according to conventional standards of educational achievement, like failure. However, I would urge all of us to consider the possibility that in fact it is not: that in fact, it is the beginning of a radical new definition of success.

The book is now on my summer reading list, a move I can now happily begin to justify as "thesis-related" instead of pure obsession. Then again, as unschoolers remind us, pure obsession is often the best justification.

Email ThisBlogThis!Share to TwitterShare to FacebookShare to Pinterest
labels: education