Two further examples for the annals of "patriarchy hurts men, too."

I'll be honest. I became a card-carrying member of the feminist party (hehe) when I realized there were still people around who thought I should do and be certain things and not do or be certain other things on account of my being a girl. There's nothing -- bar threats to the health and wellbeing of my people -- that makes me dig my heels in faster than someone telling me I "should" or "shouldn't" in any way, shape, or form. At that point (late teens) I wasn't thinking much about the way the guys I knew were also injured by the sexist "shoulds" and "shouldn'ts" that pervade our cultural milieu.

But it doesn't take a degree in gender studies to realize that if women and girls are being told "be this," then men and boys are being told "be that," and that this sort of oppositional, essentialist conception of gender roles [1] sucks ass for everyone concerned. Not only do women and girls suffer from inequality based on sex and gender -- guys struggle daily against the straight jacket conception of masculinity that limits their ability to be fully human actors in the world. One of the things I take great pleasure in as a feminist is that I have a usable worldview that not only allows but actually supports my desire to see men and boys as more than brainless sexbots driven by the desire to draw blood and get laid. Which, given the number of men and boys in my life ("hi guys! you're awesome!") really makes my life a helluva lot easier.

Not that I don't believe that folks who don't explicitly identify as "feminist" are incapable of seeing men as human beings. But I do believe that an ability to think critically about the messages that our various cultures send us about gender -- and in this case, specifically what it means to be a guy -- is an essential human skill. And one that does not come easily to folks who aren't at least open to thinking about things from a feminist perspective.

See, when people don't question the "common sense" notions of masculinity and femininity that dominate popular culture (not to mention being actively defended by conservative voices) then stupid shit like this happens: 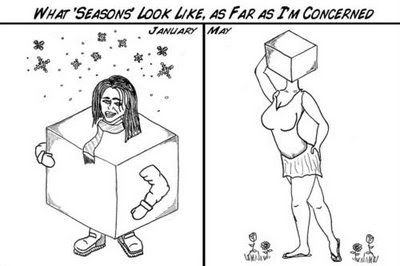 This editorial cartoon, drawn by Harvard Crimson cartoonist "Samual L. Clemens" was featured this week on the Crimson's website (h/t to MK via twitter for the link). It employs, with no sense of critical self-awareness or commentary, the sort of ideas about women and their bodies that feminist activists have objected to since, well, forever. (Fun historical factoid: at the turn of the twentieth century, male patrons at the reading room of the British Museum protested the admittance of women scholars on the grounds that their female bodies were so distracting that male researchers wouldn't be able to get any work done [2]) But I want to lay aside what this cartoon says about the worth of women in the cartoonist's eyes (as MK pointed out, "It's like wearing a big sign that says WOMEN: PLEASE AVOID ME AT ALL COSTS.") and suggest we consider for a moment what this image says about the worth of men [3].

The take-away message of this cartoon about straight guys is that they are incapable of (and uninterested in) seeing the people to whom they are attracted sexually as whole persons. If a woman is bundled up in winter clothes, their bodies might as well not exist; if a woman is dressed in form-fitting, skin-baring clothes, then their head (read: personhood) disappears from view. This is a trope of male sexuality so prevalent that a lot of women have bought into this narrative of how men's sexuality works, as evidenced by the calls for a "return to modesty" by a number of prominent women writers and activists [4]. In this view, dudes are incapable of integrating their physical, sexual desire for others into an understanding of other human beings as more than a useful means to the end of sexual gratification. I call bullshit. I call bullshit on the idea that men are incapable of caring about the women they are attracted to as whole persons: as incredibly sexy, active, physical presences and as human beings with thoughts, feelings, and distinct personalities. Regardless of the time of year, and regardless of what said object of desire is wearing at the moment she happens to cross their flightpath.

Mr. Clemens, do yourself a favor. Go out into the balmy spring day, enjoy people-watching, and enjoy every bit of the people you see: all the way from head to toe. And consider how awesome it might be if you could get to know them as actual human beings instead of just passing, headless bodies. See if practicing that sort of mindfulness doesn't expand your horizons.  And maybe prompt you to question the messages you've been getting about your sexuality and gender.

The other story that caught my eye this week and made me think, "gee, we live in a culture with absolutely respect for men and boys as human beings," was the word spread around the blogosphere that the New York Times review of the recently-released summer comedy "17 Again" contained the following caution: "17 Again" is rated PG-13 (Parents strongly cautioned). Girls are particularly cautioned.

I have not seen the film, and it's not the sort of movie I'm generally eager to see anyway, so the point I want to make has nothing to do with the actual content of the film. The point is: why "girls particularly"? Assuming there is something potentially objectionable in the movie, wouldn't a parent have cause to be equally concerned about their sons as their daughters being exposed to it? If, indeed, the objectionable content has some sort of gender-related ickyness (say, sexual violence against women, or sexual humor, or nudity, or whatever else people think fragile girlminds are incapable to taking in without severe trauma) . . . shouldn't we be equally concerned about exposing boys to such experiences?

As commenter SarahMC over at Pandagon pointed out, the implicit message of warning girls specifically against seeing the film is: "Girls should not be exposed to cinematic depictions of misogyny. Boys, however, get extra butter on their popcorn w/ every ticket purchased."

This gender-specific warning, like the Crimson cartoon, not only turns on the paternalistic view of women and girls Jessica Valenti recently described in her latest book The Purity Myth -- it, like the cartoon -- uncritically accepts a caricature of masculinity that assumes men either enjoy, are oblivious to, or untouched by misogyny.

Not. true. Spread the word.

UPDATE: MK offers her own response to The Crimson.

[1] oppositional, essentialist conceptions of gender mean, in plain English, that the categories of "male" and "female," and the people who fall into these two categories are seen as 1) opposite from each other in temperament, social roles, etc., based on their gender and 2) that these states of being are natural due to our biological sex.
[2] Hoberman, Ruth. ‘Women in the British museum reading room during the late-nineteenth and early twentieth centuries: From quasi- to counterpublic.’ Feminist Studies, vol.28 no.3 (Fall 2002), 489-512.
[3] I am assuming, given the pseudonym, that the imagined perspective in the cartoon is supposed to be that of a dude.
[4] See, for starters, Wendy Shalit's A Return to Modesty and Girls Gone Mild,, Laura Sessions Stepp's Unhooked: How Young Women Pursue Sex, Delay Love, and Lose at Both.