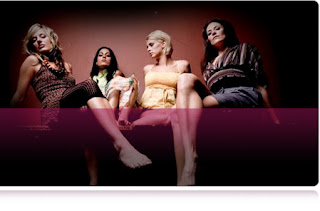 don't worry boys: we'll be your interpreters for the evening
Just in time for Valentine's Day, the Wednesday edition of the Boston Globe had a feature story on the website www.hertaste.com, the gist of which is summed up in their tagline: "you are being overlooked by women for details you didn't even know mattered." The Globe explains:

And what, pray tell, are the the "little details" men know nothing about? The categories on the Hertaste homepage are "fashion," "garage," "pad," and "gifts." That's right: guys categorically, it seems, don't know how to 1) dress themselves, 2) purchase the right car or car accessories, 3) furnish a house or apartment, or 4) shop for gifts that say "I actually know and really like you." Those life skills are all part of the secret world we women live in that guys are clueless about. So the women of Hertaste are here to save the day.

I find this incredibly offensive to women and to men alike.

The premise of the website is this: That men must--but don't know how to--make themselves attractive to (hot) women (as evidenced by the chicks lounging on the homepage). This narrative of male incompetence at understanding women draws on the tired pop psychology theory that "men are from Mars and women are from Venus." Such thinking dehumanizes women by suggesting they are so different from normal human beings (men) that they aren't even from the same planet. It also belittles men by suggesting that they're such idiots that they're incapable of actually relating to their fellow human beings (women) without an intermediary to translate women's mysterious feelings and motives.

Specifically, in this case, Hertaste deploys this pervasive narrative of gender difference as part of a time-honored marketing strategy: building on, or manufacturing, insecurities in order to sell stuff. Dudes! Women will think you're a loser if you don't buy expensive clothes, electronics, drive a suave car, or give her expensive jewelry. What ever happened to romantic notions like--uh--having a real conversation? Enjoying a shared interest in literature or movies? Or even--more prosaically--simply prioritizing student loans over a black leather couch?

Fundamentally, my problem with this website is summed up in its very name: her taste. This isn't a website about learning how to better express who you really are, but rather a site that encourages people to perform the sort of gendered identity they think "women" as a group will have the hots for. I can't speak for all women out there, but let me just say that's about one of the biggest turn-offs I can think of.

posted by annajcook at 2:58 AM