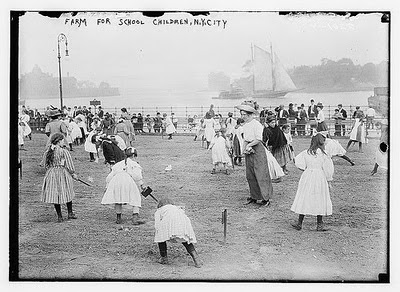 Gwynne Watkins @ Salon offers her analysis of a recent "exposé" by Jennifer Senior in the New York magazine on the unrealistic expectations of modern parenting.

"I Love My Children. I Hate My Life." That's the cover line on this week's New York magazine, superimposed on a photo of a beautiful mother and infant in a sun-drenched landscape. Presumably, the mother is loving her child and hating her life. Presumably, we all are.

The whole post is worth reading, since it calls out the bullshit that is our contemporary culture's obsession with parenting that turns human beings into infinitely perfectible projects -- yet refuses to accept Senior's conclusion, which is that if that "perfect" family life is a lie, all we have left to live on is the fumes of nostalgia.

One particular passage of Watkin's post, however, sort of hit me in the head like a low-hanging tree-branch. So I'm hijacking it for this blog post so I can ask, once again, why the fuck "children are people too" such a difficult concept for people to grasp.

Here's the passage. Read and digest.

If you're having a baby for reasons of self-gratification, of course you're going to be miserable. Becoming a parent is less about enriching your life than it is about up-ending it entirely to make room for another human being. And that's what Senior's article is missing: the fact that children are people, and having a child is about forging a relationship. Take this quote from a sociologist Senior interviewed about why parents are so disgruntled: "Middle-class parents spend much more time talking to children, answering questions with questions, and treating each child's thought as a special contribution. And this is very tiring work." Funny, that doesn't sound like work; that sounds like having a conversation. The true reward of parenting isn't looking back with nostalgia, as Senior concludes; it's getting to watch a baby turn into a fully realized person. It's hearing the thoughts and opinions of somebody who didn't exist until you brought them into the world. It's a humbling, daunting, awesome experience -- and it's hard enough without the added pressure of making every moment enriching and significant.

So here's the thing. What I find so disturbing about this passage is the way basic human interactions, when placed in the context of parent-child relationships, are suddenly framed in Senior's article as an onerous obligation, and joyless demand. And this is seen as so normal, so common-sensical in our culture, that a sociologist seems to think there's something problematic about asking one person in a committed relationship (parent) to treat the other person in that committed relationship (child) as if their thoughts were worth giving a damn about.

Take a minute to switch out "spouse" with "child" in the above passage:

Middle-class couples spend much more time talking to each other, answering questions with questions, and treating each other's thoughts as a special contributions. And this is very tiring work.

"I love my spouse. I hate my marriage"? If the thought of spending time with your partner, talking together and treating each others' thoughts with respect felt like tiring, joyless work -- drudgery only relieved by the fond memories you had of your courtship or a fleeting weekend getaway -- then possibly it's time to seek out some couples counseling and/or ask yourselves whether this is really a relationship worth being in.

And while you obviously can't walk out on a dependent child with the same impunity as you can an adult spouse, I'd suggest that it's not too much of a stretch to stop thinking of children as hobbies or vocations and, you know, remember that you enter into a relationship with them. And that -- as with all human relationships -- the intrinsic reward of relatedness is the pleasure of getting to know another human being intimately. Learning to see the world through their eyes. Watching them grow and change over time. The pleasure of having conversations together, some of which last a moment and some of which will go on for years. Sharing experiences like the reading of a book, the watching of a movie, attending a concert or art show, cooking dinner and sharing the meal.

"Becoming a parent is less about enriching your life than it is about up-ending it entirely to make room for another human being," Watkins writes, in her response to Senior. While I agree with her on the basic point that becoming a parent because you expect a child to fulfill your expectations is problematic, I would make a slightly different, possibly more radical argument: rather than juxtaposing "enriching your life" with "up-ending it" to make room for another, I'd suggest that such an up-ending is intrinsically rewarding, even if in none of the ways you initially anticipate. And that is the beauty of the chaotic unpredictability of humanity. If that sort of uncertainty is not your cup of tea, then maybe you should think again about whether you want to have kids. Or whether you want to be in a committed relationship of any kind.

'Cause that's kinda the point of being in a relationship.

As someone who has grown from being a dependent child to an adult in relationship with parents who treated her as a human being, I can attest first hand that (as with spousal relationships) recognizing each others' humanity doesn't make the experience of living together a panacea. It doesn't mean we've never failed each other, struggled to communicate, lost our tempers, or felt (temporarily, sometimes for months or years at a time) at an impasse. What it does mean is that we aren't reduced to our socially-assigned roles, and the expectations of behavior that come with those roles. It does mean we have more flexibility to adapt our relationships as the people within them grow and change -- because those relationships were formed in the first place specifically to suit our own individual selves. In other words, shifting from the straight-jacket of "perfect madness" parenting to a model of ordinary human relatedness doesn't solve all of life's problems.

But it absolutely does open up a realm of possibility that is not possible when one person in the equation is reduced to a project rather than a person. A series of tasks and responsibilities rather than an organic being whose presence you are given the chance to experience.

Which is (surprise, surprise!) more or less the argument that feminists have made for decades about the idealization of heterosexual, monogamous marriage. When you reduce two human beings to their roles of "husband" and "wife," and punish individuals from deviating from impossible normative standards (or make it exhausting, endless struggle for them to do so), it's a recipe for disaster. The exact same observation can be made about "parent" and "child."

Senior's essay on parenting is the perfect opportunity for the feminist "click" moment, parenting style. It could offer us a chance to assess the way our culture's idealization of family life dehumanizes children and parents, setting them up in relationships warped by power dynamics that make true intimacy all but unattainable.

Instead, Senior's "solution," to the extent that the article posits one, appears to be a band-aid fix that feminists will be very familiar with: the Flanaganian solution of "settling." Senior's article seems to suggest that the only options are

a) Playing to win. Pretending to find pleasure in the "perfect madness" of trying to conform to our culture's ideal of the good parent (in reality, the good mother), thereby driving yourself and everyone around you crazy, but at deriving pleasure from the knowledge that you're out-parenting all other parents or

b) Calling bullshit and giving up. Re-framing parenting as grim work, rather than a joyful vocation, undertaken out of duty and made bearable by the hope of delayed gratification of nostalgia after the raw experience has long passed. Just give up, Senior's article ultimately seems to suggest; expecting to experience enduring happiness (gasp!) in your relationships with your children is just unrealistic. Shame on you!

I'm going to go out on a limb here and suggest that this is a false dichotomy, and that the way out of this lose-lose situation is, well, feminism for children. See, both of these "options" still posit that parenting = job rather than parenting = relationship. You can enjoy a job for intrinsic and/or extrinsic rewards (conducting oral history interviews!), or you can dislike a job but feel it's worthwhile (canvassing before an election), or you can dislike a job but recognize it's necessary (like doing dishes), but at the end of the day it's still a job of work.

Why would you choose either of these options when instead you could have interesting relationships with these people who've walked (often invited by you!) into your life? Isn't that one of the most awesome thing about being alive in the world -- the chance to get to know and caring about the lives of others?

I say, just quit. Quit your job and go find a relationship. With that person who you're interested in being intimate with as they grow and discover the full strength of their humanity. Who knew this would be such a radical suggestion?

posted by annajcook at 6:20 AM