from the archive: a new mother's diary from 1910 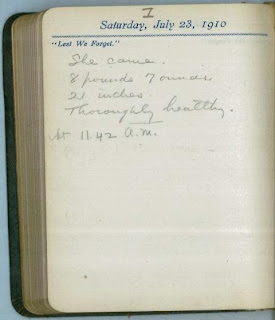 In honor of my friend and colleague supervisor Elaine who has just given birth to her first child, Sean Alexander, I put together a blog post over at The Beehive. It features the diary of Sophie French Valentine, who gave birth to her daughter in the summer of 1910 and chronicled their early weeks and months together in a page-a-day Standard Diary:


As the summer waned, Sophie recovered from her surgery and chronicled the comings and goings of her household, as well as the growth of her daughter (also christened Sophia). Several weeks after the birth, the family doctor paid a visit and pronounced “the little one…sound and vigorous.” Three days later, infant Sophie “went out in the bassinette in front of the house” for the first of what would be many afternoons in the fresh air with her mother. Sophie’s husband, a diplomat, appears to have been away during much of his wife’s convalescence, but a steady stream of female friends and relatives populate the pages of Sophie’s diary. On August 14th, for example, the day “the little one” was baptized Sophia French Valentine, she “had pictures taken with Harriet, Charles, Aunt Martha, Auntie May; and Elizabeth and Lucy,” as well as with her mother and Aunt Caroline (“who held her and talked to her lots”). Later she was visited by “Theodore, Mrs. Graves, and Auntie Beth.”

You can read the whole thing over at the MHS blog.
posted by annajcook at 2:18 PM