happy thanksgiving day, one and all 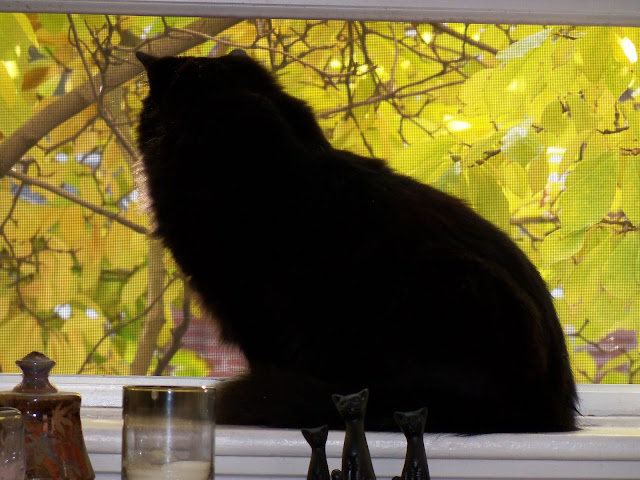 Mostly, this year, I'm thankful for a long weekend at home with Hanna and Geraldine. As I'm typing this, we're hanging out on the couch with half an eye toward the Thanksgiving day parade, catching up on our leisure reading and looking forward to the arrival of our friend Ashley for tofurky dinner.

And 'cause this is the Future Feminist Librarian-Activist, I wanted to note that I woke up this morning to the voice on WGBH (our local NPR station) saying, "It's Thanksgiving morning, and your work in the kitchen is almost done Moms!" 'cause clearly "Moms" are the only people capable of putting together a Thanksgiving meal. (As Hanna said, "Well, in my house it was always my dad!")

And it might just be because I don't often watch network television, and rarely morning television -- not to mention on a treacly American holiday -- but wow. The narratives of consumption, "family," all revolving around gender roles, is front and center. In a train-wreaky sort of way.

Not that the Macy's Thanksgiving Day Parade has ever been about anything but consumption. But it's fascinating to see how that's all packaged in the mainstream, completely bland-yet-powerful cultural frames of family (Victoria's Secret models gushing about the newfound bliss of motherhood), nationalism (yes, for those of you who were listening, Colin Quinn did liken the parade to the Nuremberg Rallies) and relentless consumption. Also, this is the first time in a while I've actually been witness to a critical mass of commercials aimed at the twelve-and-under set and crivens! It's one thing to read about the aggressive gender-segregated marketing of children's toys (see booknote on Delusions of Gender)? It's another thing entirely to actually see it first-hand for three hours. I think on some level it's the sort of stuff I believe intellectually is out there, but I don't believe-believe people are really that actively and nakedly endorsing stereotypes.

But no: it's there, front and center. Amazing. I feel like I should be taking notes on the language used to shape meaning of the day and the way in which the parade (apparently) perfectly "captures the essence" of whatever this day is about in our collective imagination.

Huh. I didn't start this post as a rant. So I guess I'll stop there and go back to enjoying the day. Particularly the work of Sir Terry Pratchett, whose existence in the world has brought us passages such as this, from his latest Tiffany Aching novel, I Shall Wear Midnight.


And what are my weapons? [Tiffany] thought. And the answer came to her instantly: pride. Oh, you hear them say it's a sin; you hear them say it goes before a fall. And that can't be true. The blacksmith prides himself on a good weld ... We pride ourselves on making a good history of our lives, a good story to be told.

And I also have fear -- the fear that I will let others down -- and because I have fear I will overcome that fear. I will not disgrace those who have trained me.

And I have trust, even though I am not sure what it is that I am trusting.

"Pride, fear, and trust," she said aloud. And in front of her the four candles streamed fire, as if driven by the wind, and for a moment she was certain, in the rush of light, that the figure of an old witch was melting into the stone. "Oh, yes," said Tiffany. "And I have fire."

Enjoy your rest, wherever you are, and then carry on with pride, fear, trust, and fire. Doing whatever it is you are called to do.